Kitces Courses are coming soon and we need your help! Please Please take this short survey to let us know what you’re most interested in learning about.

For the past several years, the prevailing view has been that the rising “threat” of robo-advisors and their 0.25% AUM fees would inevitably cause fee compression for financial advisors who would struggle to compete for growth.

And the latest financial advisor benchmarking study from FA Insight finds that in fact, the growth rates for financial advisory firms did fall substantially in 2015 (though they remained positive), as measured by AUM or revenue. However, this appears to be driven primarily by weak market performance in 2015; the more stable growth rate based on clients fell only slightly in 2015.

And this slight decline in client growth rates isn’t entirely surprising either, given that the benchmarking data reveals that nearly 1-in-3 advisory firms raised their prices in the past 2 years, and another 1-in-5 plan to raise their AUM fee schedule again in the next 2 years. Overall, the median advisory fee remains at 1% on the first $1,000,000 of assets – exactly where it’s been since 2009 – and the average advisory fee as a percentage of all AUM (which includes all breakpoints for larger clients) rose from 72bps in 2014 to 78bps in 2016.

On the other hand, advisory firms are also recognizing that to stay competitive, they also must do more for clients. Accordingly, the latest data reveals that firms are expanding their services for clients, hiring more professional financial planning staff, and investing heavily into their own technology, to justify their value proposition and current fee schedule… albeit at a near-term cost of overhead ratios that rose for the first time in 8 years, and a nearly 25% decline in advisor profits in 2015 (despite clients, revenue, and AUM all being up for the year).

Nonetheless, the implication is still that once advisory firms get through this reinvestment phase, that the outcome will not be the financial advisor fee compression that some have been predicting. Even after 4 years of the robo-advisor movement, a mere 5% of advisory firms report that they have any plans to cut their AUM fees at all to compete, even as robo-advisors themselves are showing signs of growth struggles. Instead, the long-term outcome appears to be that financial advisors will continue to charge substantively similar fees to what they charged in the past, but will be compelled to deliver more value than ever to justify their AUM fees, while also focusing more than ever on the need for operational efficiencies and focused marketing!

The latest data from the 325 advisory firms studied (almost exclusively RIAs), shows that growth rates turned down in 2015 (the latest year of full data), whether measured by revenue or AUM. Though given that both AUM itself, and advisory fees (which are predominantly AUM-based for most RIAs) are tied to the markets, it is perhaps no surprise that growth rates fell, as markets themselves (as measured by the Russell 3000) were flat in 2015 after a strong series of prior year returns. 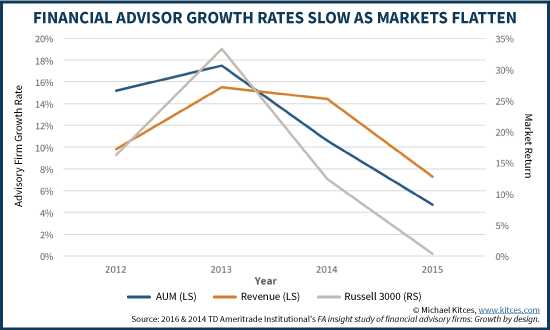 Notably, there is at least some lag in the impact of markets, given that fourth quarter market returns are reflected in billing that doesn’t actually occur until the beginning of the first quarter in the following year. Thus, particularly strong results in 2014 were driven at least partially by the follow-through of strong market returns in 2013, while the flat markets of 2011 had caused 2012 to be lower in terms of growth; in turn, this suggests that even as 2015 growth was down due to weak markets in 2015, the effect will at least partially spill over to 2016 (especially given rocky markets in the first quarter of 2016 as well).

On the plus side, the slowdown in growth is less apparent when viewed from the perspective of growth in the number of clients (which aren’t directly impacted by market returns). Nonetheless, the results show that growth rates in the number of clients also slowed in 2015 (perhaps due in part to the challenges of getting new clients in the midst of flat markets), and advisory firm owners anticipate the growth will slow even further in 2016. 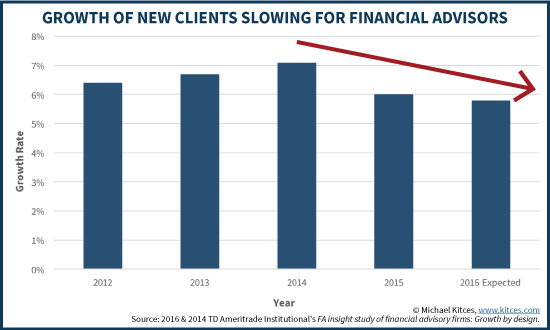 Profits Are Falling As Advisors Step Up To Compete

While the latest FA Insight data shows that advisory firm growth is slowing, it’s still up overall. Which makes it all the more notable that even as clients and revenue and AUM were all up in 2015, profits were down. A lot. 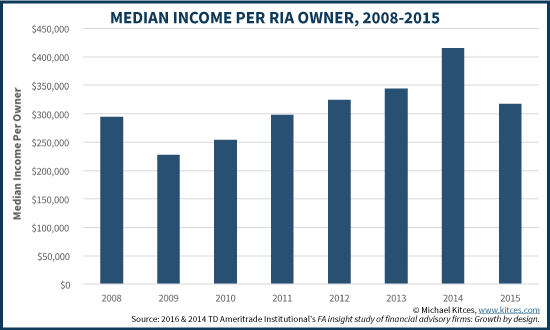 Given that revenue was up, the question arises as to why profits were still down so significantly. And the answer, in a word, was “overhead”, as advisory firms experienced a significant uptick in overhead expenses, the first after a string of 8 years of decreasing overhead margins as advisory firms expanded their revenue per client on the back of the post-2008 bull market. 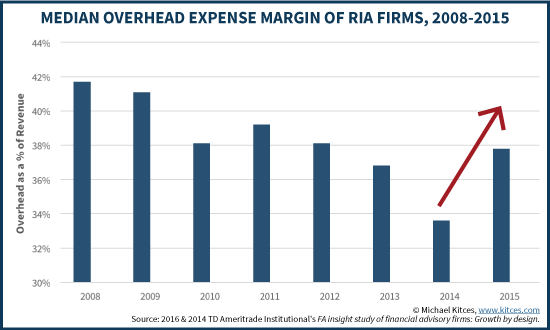 Notably, though, the authors of the study point out that staffing costs as a relative share of revenue remained stable; instead, it was the share of revenue consumed by fixed costs, including office space and technology, that grew in 2015. In addition, there’s some indication that advisory firms are beginning to shift in what type of staff they hire; across all firms, revenue per professional fell 2% while revenue per team member was up 2%, even as total head count remained steady, which implies that advisory firms are starting to hire more new financial planning professionals in lieu operational staff members (due, perhaps, to the impact of all those technology investments making operations staff less necessary?).

Overall, the median advisory firm – with 190 clients, $185M of AUM, and $1.5M of revenue, had an operating profit margin of just 19.6%. While this is admittedly down from a (record-setting) 24.1% in 2014 (which came on the back of the 2013 market rally), it is also down substantially from the median 22.1% profit margin in 2013… and again, represents a significant retrenchment in profit margins, given that advisory firms still grew during the time period! It’s not as though there was a bear market cutting into key client AUM and revenue metrics!

Beyond the challenges of slowing growth and rising overhead, perhaps one of the most notable trends highlighted in the FA Insight benchmarking study is that despite all the “robo” buzz, the AUM fees that financial advisors charge their clients aren’t falling. In fact, they’re rising. 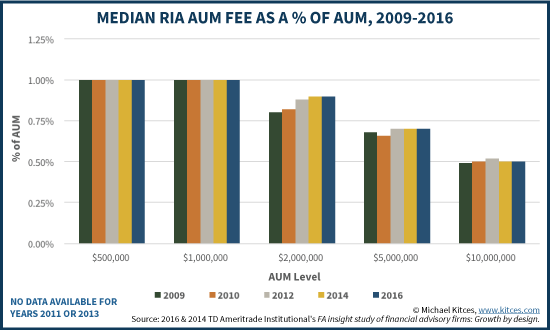 In fact, in the 2014 edition of the FA Insight survey, 70% of firms indicated that they planned to keep fees steady (even as the robo-trend was gaining momentum), and 28% of advisory firms reported that they planned to raise fees in the next two years … and the 2016 data reveals that in reality, 34% of firms actually did so. And looking forward from 2016, another 21% of advisory firms still report that they plan to raise fees in the next 2 years, compared to only 5% who plan to decrease their fees.

Despite the robo ‘threat’, far more advisory firms are RAISING fees than lowering them!

Furthermore, when considering all the breakpoints for larger clients, the median advisory firm is generating 78bps of revenue for every $1 of AUM, which is actually up from 72bps in 2014. Of course, these AUM fees suggest that most advisory firms have at least a couple of very large clients distorting their average billing rate (given that the median client is still around $1M of AUM, which would be associated with a 1% [100bps] AUM fee).

Ultimately, what all of these trends suggest is that despite the popular narrative that robo-advisors are a threat to financial advisors, in practice they’re not. Advisory firm growth rates are slowing, but in a manner that is more driven by market volatility than underlying organic growth dynamics, and overall advisors have raised prices even as the robo advisor trend has exploded in the media. Which in point of fact, shouldn’t be entirely surprising, given that robo-advisors and human advisors really serve different segments of consumers in the first place. Not to mention that in 2016, it’s become evident that robo-advisors are suffering from their own growth challenges, given the difficulty of client acquisition at their low price points! 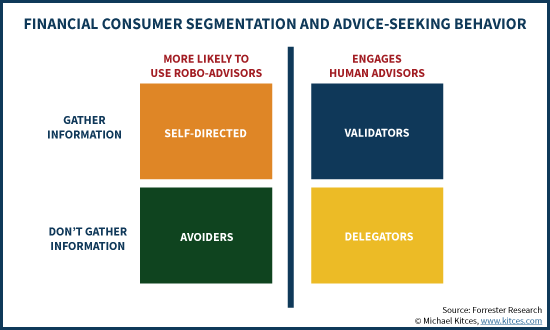 However, declining profit margins and rising overhead expenses suggest that the commoditizing forces of technology are taking their toll. Not by competing directly for clients or forcing advisors to cut their fees, but instead by driving financial advisors to “do more” to earn and justify their fees (thus the rotation to more professional staff), and to compete with similar technology (thus rising overhead expenses for technology reinvestment). In other words, the challenge for the typical financial advisor is not “compete against robo-advisors” but instead is “adopt technology at least as good as robo-advisors, and then add more value on top” (for an additional price to clients, but with additional professional staffing costs).

Or stated more simply, robo-advisors aren’t causing AUM fee compression, but they are causing at least a near-term profit squeeze, as advisors reinvest into technology and professional financial planning staff to compete and offer more, and then raise their prices to better match the services they’re (now) offering. The question in the long term is whether these investments will ultimately allow advisors to re-emerge more efficient (on the back of better technology), and more competitive (with a better and more consistent client experience). In fact, a whopping 68% of advisory firms report that “operational efficiency” will now be a key driver for future growth, along with enhancing the “client experience”.

And overall, it’s notable that larger advisory firms, that already have more revenue and resources, appear better positioned to compete, as their advisors spend more time servicing clients and have more non-revenue staff to support them. Similarly, larger firms are also more likely to provide a wider range of services to clients (which to some extent they have to do, because larger firms also tend to serve more affluent and typically more demanding clientele), while solo advisors are under greater pressure than ever to have clear minimum fees for clients and to leverage technology just to stay competitive (though the standouts who do so are as profitable as ever). 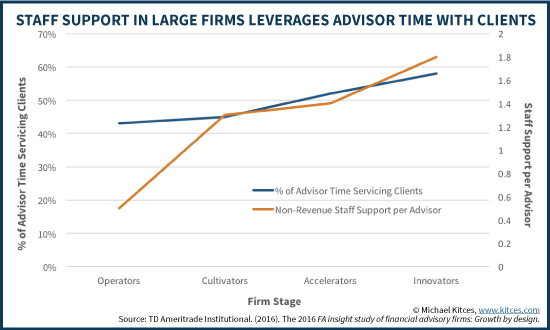 The bottom line, though, is that the latest benchmarking data reveals that 4+ years into the robo-advisor trend, the threat of technology commoditization is not causing financial advisor fee compression. It is, however, forcing advisory firms to make their own investments into technology to stay competitive, and deepen their financial planning talent to justify their higher AUM fees, along with driving an increasing focus on identifying a clear target clientele and establishing workflows to create operational efficiencies. On the other hand, given that we’re now 7+ years into a bull market, the pressure is arguably on for advisory firms to “figure all of this out” and regain control of their profit margins before the next bear market comes along, or the combination of declining revenue (from a market decline) on top of increased service demands could put severe pressure on most advisory firms.

So what do you think? Have you felt the need to cut your advisory firm fees? Or are you reinvesting to bolster your value and hold the line on your current fees instead? Or are you one of the one-in-four firms looking to raise AUM fees in the coming years? Please share your thoughts in the comments below!