With markets up and clients (generally) happy, advisory firms are enjoying record productivity, with the average advisor now responsible for nearly $500,000 of revenue by one benchmarking study’s measure. And the larger the advisory firm – and the more it scales its advice offering – the greater the advisor productivity seems to be.

Yet a deeper look at the numbers reveals that in reality, the largest advisory firms actually have the least productive advisors, at least when measured by the number of clients they serve. Similarly, while profit margins for advisory firms overall are healthy, they are remarkably similar regardless of whether a firm has $1M, $5M, or $10M of revenue. In other words, financial advice does not actually appear to be scaling across the landscape of advisory firms!

Instead, the key differentiator for the largest firms appears to be their ability to attract the biggest, wealthiest clients, and accelerate their growth rates despite spending the smallest percentage of revenues on marketing. Which means ultimately, while the productivity of financial advisors themselves doesn’t appear to scale much as a firm grows larger, the ability of the largest firms to attract the most affluent clients and scale their marketing may be the biggest advantage of that large firms have over their smaller competitors!

Financial advisors are in the business of serving clients and either bringing in or retaining revenue for the advisory firm. Accordingly, when it comes to measuring the “productivity” of an advisor, the classic metric is to look at how much revenue is attributable to the advisor’s clientele (especially given that an advisor can only ever serve “so many” clients).

From this perspective, last year’s 2014 FA Insight benchmarking study of advisory firms suggests that advisor productivity has never been stronger, with a record-breaking $479,500 of revenue per professional across the entire based of advisors studied. And the potential implications are significant; to the extent that an advisor’s compensation has a fixed base, greater revenue-per-advisor with an at-least-partially-fixed compensation model means a healthier, more profitable, more sustainable advisory firm. 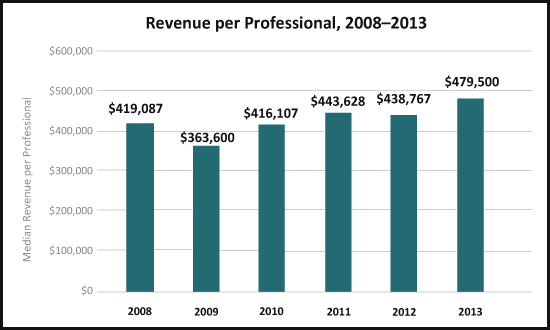 However, what is perhaps even more notable is that advisor productivity appears to be heavily influenced by the size of the advisory firm in which he/she is based. As last year’s Investment News Financial Performance benchmarking study showed, there is a clear and strong relationship between the revenue of the firm in total, and the average revenue per advisor professional (and per staff member). The larger the firm they work for, the more “productive” the firm’s advisors are in sustaining revenue for the business. 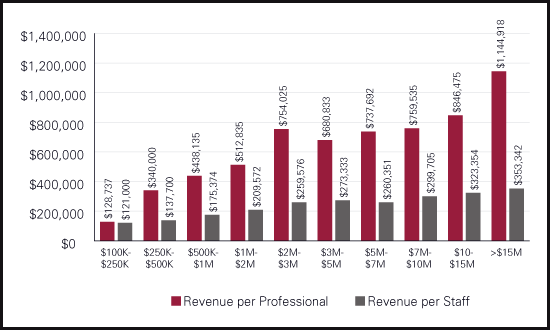 On the one hand, it’s not entirely surprising that larger advisory firms would be capable of generating better productivity for their advisors. As anyone who has ever worked in a small firm knows, the role of being an advisor-owner entails a lot of responsibilities, to do… virtually everything in the early years, and leaving limited time to actually serve the clients. It’s only as a firm deepens its staff infrastructure and talent pool that it becomes feasible for an advisor to “specialize” in actually just serving clients – which is why the ranks of advisors at the largest advisory firms are increasingly dominated by “employee” advisors who don’t have a lot of other duties beyond simply managing client relationships and delivering financial advice.

While the largest advisory firms tend to have the most “productive” advisors as measured by revenue, a deeper dive into the data reveals that larger advisory firms are only more productive when looking at revenue. In terms of managing clients, “focused” employee advisors in large firms don’t actually seem to handle more clients. In fact, the advisors tend to actually serve fewer clients as the firm grows from the $2M to $15M revenue range, and it’s only the very largest firms that eventually regain some efficiencies with an uptick in the number of clients per advisor! (Data based on dividing the average revenue per client into the average revenue per advisor from the above Investment News benchmarking study). 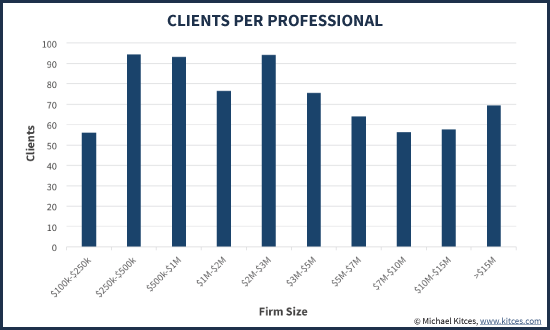 Going even deeper, its turns out that when viewed on the basis of not just clients per advisor but clients per total staff count, the picture is even worse. The larger the advisory firm, the less productivity there is as measured by the number of clients per total staff! The largest advisory firms are actually using more advisors and staff members per client to deliver their services than smaller firms – the very opposite of greater productivity and scalability! 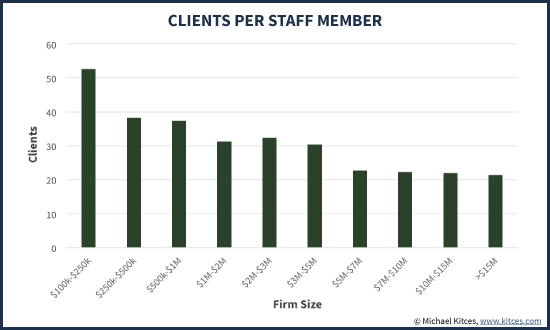 Accordingly, it is perhaps not entirely surprising to find that even as advisory firms grow, they do not actually see the profit margin expansion that would usually come with a business model that is scaling. As the Investment News benchmarking data further shows, the profit margins of advisory firms tend to remain remarkably flat even as the firm grows, once getting over the initial hump of being a sole proprietor under $250k of revenue. As the firm gets larger, the revenue per advisor does increase, but only at the cost of hiring more staff to support the servicing of those advisors and their clients and the growing infrastructure of the firm! And the largest firms actually operate with some of the lowest operating margins! 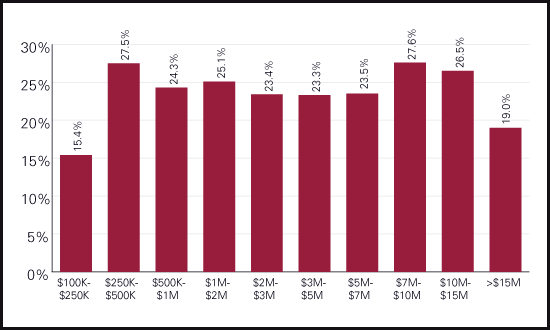 In fact, given the “woes” of advice not scaling into better profit margins and more clients-per-advisor as an advisory firm grows larger, it’s a small wonder that firms can even maintain their profitability as they grow their staff and infrastructure!

The saving grace, as it turns out, is the fact that while the largest advisory firms actually have the most headcount per advisor and the least productivity (as measured by advisors per client), they offset this challenge by having the wealthiest clients. As the Investment News benchmarking data reveals, there is actually an astonishingly strong correlation between the size of an advisory firm (as measured by its revenue) and the typical size/wealth of its clientele (as measured by AUM and revenue per client). The bigger the firm, the bigger the clientele being served. 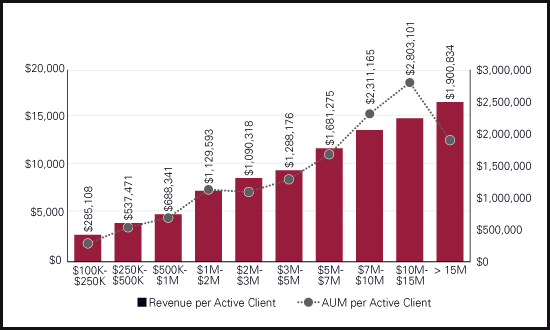 The fact that larger advisory firms tend to have wealthier clientele raises interesting questions about the dynamics of growth and new client acquisition as a firm grows.

On the one hand, it’s possible that there is a self-selection bias at work; the advisory firms that happen to be the most successful at attracting the wealthiest clientele end out with the most growth, and after-the-fact show up to be the largest firms. In turn, their success in serving this wealthy clientele leads the firms to hire more and more staff to deepen their services to those clients, leading to lower staff-per-client productivity (in the name of “giving more service”) and a failure to expand profit margins.

On the other hand, it’s also possible that the size, depth, and “grativas” of an advisory firm matters to wealthier clientele, and that the reality is simply that wealthier clients tend to seek out larger firms under the perception/belief that bigger means better. Notably, whether the AUM of a firm is a good way to evaluate the quality of its advice is still a subject of much debate! Nonetheless, though, as the advisory firm grows, it begins to attract more affluent clients, and as those wealthy clients come on board the firm hires more staff to better service them. The deeper the service capabilities of the advisory firm, and the larger it continues to grow, the more affluent clientele it attracts, and the faster it continues to grow.

While there is limited data to clarify this chicken-and-egg problem – do advisory firms grow by getting larger clients, or do they get more large clients because they’ve grown – the fact that the largest advisory firms seem to have the fastest growth rates suggests that bigger firms really do have more advantage in attracting bigger clients. The Investment News study found that the largest firms are enjoying an average growth rate of 18.6%, compared to no more than 17.5% for other types of ensemble firms and 15.4% for solo advisors. And that’s a higher growth rate despite the hefty growth denominator that large firms must overcome; after all, a firm with $20M of AUM only needs $3M of new assets to break a 15% growth rate, but a $2B AUM firm needs a gargantuan $372M increase in AUM in a year to achieve an 18.6% growth rate. Sustaining higher growth rates “despite” a larger size is no small feat indeed! And notably, the largest advisory firms actually seem to enjoy the highest growth rates, despite having the smallest percentage investment of revenue into marketing and business development. 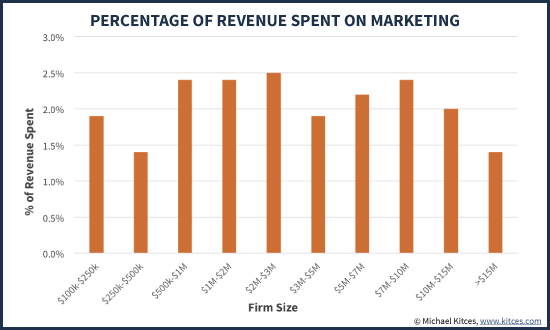 Ultimately, what all of this data implies is that the actual delivery of financial advice really does not scale very effectively; at best, advisory firms can just maintain their profit margins as they grow (though consistent profit margins with a growing firm still results in a greater dollar amount of profits for owners!). And in fact, as firms grow and drift “upmarket” to wealthier clientele (either by trying to reach more affluent clients or by improving the service model for affluent clients who find them), the growing overhead and infrastructure seems to “lock” many larger firms in place with those affluent clientele. Though ostensibly, a carefully managed firm may still be able to keep serving a broader base of clientele (as, for instance, Edelman Financial Services has done).

The bottom line, though, is simply this: while the largest advisory firms are often viewed as the most “productive” – and they are, by classic revenue-per-advisor metrics – the reality is that advisors at larger firms are arguably even less productive when looking at the numbers of clients they service. To some extent, this is justified by the fact that larger firms on average serve more affluent clients, who may demand greater attention and services. But in the end, to the extent that the largest firms are enjoying some of the largest (absolute dollar amount of) profits for owners and the highest growth rates in today’s advisory world, the true driver may not be their ability to scale the delivery of financial advice, but their ability to scale the marketing and leverage the size and credibility of the firm to bring in (wealthier) clients in the first place!