The growth of financial planning has been an incredible success story of the past 40 years, as the broader financial services industry slowly but steadily continues its shift away from the pure sale of products and towards the direction of personalized financial advice. Over the 25 years since the first CFP certificant was minted in 1973, nearly 10% of financial advisors obtained the designation, and the pace has accelerated as the CFP certification has continued to grow while the total number of advisors has been stagnant, now reaching what may be the “tipping point” of nearly 25% of all financial advisors.

Yet at the same time, the growth of CFP certificants – especially in the past decade – has not only outstripped the growth of all financial advisors; it has also dramatically outpaced the growth in the number of affluent households that financial planners typically serve. The end result: we are rapidly approaching the point where there are so many CFP certificants that there aren’t enough available half-million, millionaire, or wealthier clients available for them to serve.

As a result, financial planning may soon undergo a shift towards serving a wider base of clientele. The change will be driven not merely out of a desire to become a recognized profession that serves a wider base of the public, but instead out of sheer business necessity as financial planning firms of the future find they must lower their minimums and seek out a new “blue ocean” of prospective clients rather than continue to fight in a highly competitive space where just being a comprehensive financial planner is no longer the differentiator it once was!

Although the first CFP certificant was minted in 1973, for much of the early years financial planners were at the fringe of the broader world of financial advisors, and formed a fairly insignificant percentage of those who delivered insurance, investments, and advice. It took nearly 25 years to mint the first 34,000 financial planners (from 1973 to 1998), and by that time they still compromised barely 10% of all those who might have called themselves “financial advisors.” 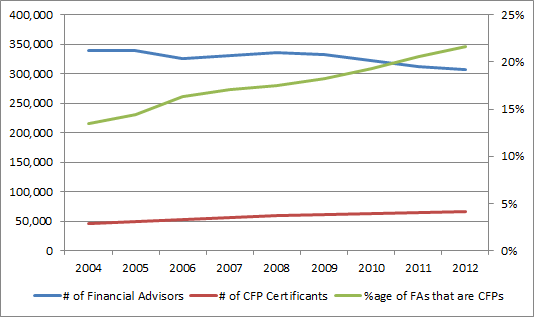 While the percentage of CFP certificants is still limited, “just” approaching 25%, it’s notable that with many types of innovation (across various industries), reaching 20%+ market penetration often represents the “tipping point” where adoption accelerates (his concept was the basis of Malcolm Gladwell’s popular “Tipping Point” book). Already, the pace has been accelerating - there were as many CFPs added in the past 15 years as there were in the prior 25 – which means financial planning may just be approaching the crossover point where it becomes even more widely adopted as a core of delivering personalized financial advice.

How Many Affluent Households Are Available To Consume Financial Planning?

While from the perspective of the public, the explosion of available financial planners has been and should continue to be a tremendous positive, when viewed from the competitive perspective it paints a very different picture, especially given the trend in recent years towards larger financial planning firms that have tended to lift their minimums to target more affluent clientele.

For instance, the chart below graphs the number of households with either $500k or $1M of net worth (not including their personal residence, based on available data from Spectrem Group) relative to the number of CFP certificants (as reported by CFP Board). 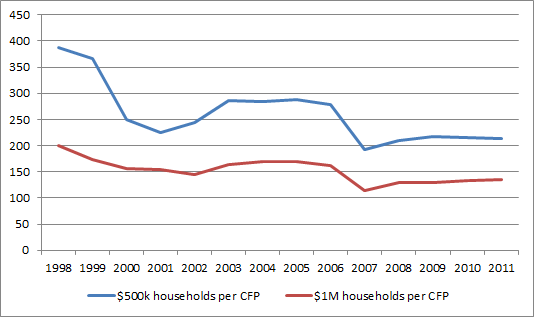 In other words, just serving clients at these levels, there aren’t even enough clients to go around for the number of financial advisors, and there are barely enough to go around even if every half-million and millionaire household worked with a CFP certificant (given that research suggests at best an individual can only maintain about 150 {financial planning and other} relationships). And if/when/as the share of financial advisors that are CFP certificants continues to increase, there simply will not be enough clients for the number of financial planners.

And of course, the caveat to the numbers above is that some large number of households are self-directed regarding their financial matters; only a subset of these prospective clients will ever actually become financial planning clients. Which means in truth, the problem of the availability of affluent clients – or a lack thereof – may already be far more severe than the charts suggest!

All of this discussion is not to imply that there’s no opportunity for success and growth as a financial planner. Instead, the simple point is that financial planning is rapidly approaching the crossover point, not only where it needs to serve a wider base of households simply to grow beyond being “something for wealthy people” into a recognized and bona fide profession, but also simply because we’re “running out” of more affluent clientele! And to say the least, we’re also reaching a crossover point where being a CFP certificant and providing comprehensive financial planning as an experienced practitioner is no longer a differentiator but now more of a minimum standard just to be competitive, especially as financial planning remains one of the few clear value propositions in a world where much of what advisors traditionally did in the past – from implementing insurance and investment products, to building basic asset-allocated diversified portfolios – is becoming commoditized by technology.

On the other hand, adjusted for the number of households with $100,000 or more in net worth (excluding the personal residence), the number of potential clients per CFP certificant is (still) a far more manageable 542 (and even a respectable 122 households per total financial advisors). Going further “downstream” yields even more available clientele, not only because there are more of them, but also because only a limited number of financial planners are currently serving the space. In other words, figuring out how to work with a wider range of households is essentially an entirely new “blue ocean” – similar to the environment of the more affluent from 10-15 years, it’s a space where just being an educated, experienced comprehensive financial planner is a differentiator.

Notably, though, succeeding with this kind of target clientele will require the delivery and business models for financial planners to evolve further from where they are today. On the one hand, many of the problems of these clients may be “simpler” (in that they don’t involve the kinds of esoteric tax rules and strategies applicable to wealthier clients), but may also have a heavier educational and behavioral component. Early results from some planners serving this space suggests that financial planning may need to be more “modular” (analyzing one section of the plan at a time, as wanted/needed) rather than always delivering the fully comprehensive (written) financial plan up front. And whether the business model of the future to serve this space is a form of the existing commission-based models, the Garrett Planning Network’s hourly model, a new form of monthly retainer model, or something else altogether, remains to be seen as well.

Nonetheless, the bottom line is simply this: over the past decade, as financial planning has continued its evolution towards being a recognized profession, there has been a growing professional angst over figuring out how to expand financial planning to serve more. But the successful growth of financial planning may soon turn this from a wistful desire into a sheer business necessity, as the pace of growth for CFP certificants has so outpaced the growth of the affluent households they serve that expanding to a wider market may soon shift to being a professional desire to a sheer business necessity!

Share your own thoughts in the comments below. Have you felt pressure to lower your minimums (or not raise or put them in place to begin with?)? Do you think the competition for clients as a financial planner is more difficult than it used to be?