The rule allowing IRA distributions to be rolled over within 60 days to avoid taxation has been around as long as IRAs themselves have existed, whether used simply to facilitate the transfer of an account, to fix a distribution mistake, or for those who want to use their IRA as a form of “temporary loan” to be repaid in a timely manner. However, to prevent abuse, Congress did enact a rule that limits 60-day rollovers to only being done once every 12 months, which the IRS has historically applied on an IRA-by-IRA basis.

In the recent case of Bobrow v. Commissioner, though, the Tax Court expanded the interpretation of the once-per-year rollover rule, changing it from applying one account at a time to instead being applied on an aggregated basis across all IRAs, effectively killing a popular form of sequential-rollovers-as-extended-personal-loan strategy.

The IRS has declared that it will begin to enforce the new aggregation-based IRA rollover rules in 2015, with a special transition rule that will still allow old 2014 rollovers to cause a 1-year waiting period for just the accounts that were involved and not all IRAs. Nonetheless, going forward advisors and their clients will need to be more cautious than ever not to run afoul of the rules when engaging in multiple 60-day rollovers over time… or better yet, simply ensure that IRA funds are only moved as a trustee-to-trustee transfer to avoid the rules altogether!

When funds are withdrawn from an IRA to be spent, they become taxable as ordinary income (with a possible early withdrawal penalty to apply as well). However, in some cases – especially in the early days of IRAs – the account owner might take a withdrawal from the IRA, not with an intent to spend the money, but simply because the owner was in the process of transferring the account to another financial institution. Alternatively, in other cases, the funds were withdrawn as a mistake (e.g., the ‘wrong’ account was liquidated where the account owner had an IRA and another bank or investment account).

To facilitate correcting such mistakes, and allowing for transfers between institutions, Congress included IRC Section 408(d)(3), which allows for an IRA distribution to be treated as a “rollover” that is contributed to a new account. Under the relatively straightforward rules, any distribution taken from an IRA would not be treated as taxable, as long as the funds were re-contributed to (the same or) another IRA within 60 days of receipt. Technically, it didn’t matter whether the purpose of the distribution was to facilitate a transfer, because it was taken as a mistake, or simply out of a desire to use the funds as a personal short-term loan; as long as the rollover contribution was made within 60 days, the distribution would not be taxed.

However, the caveat to this rollover rule is that it created the potential for abuse. An individual with a larger IRA could potentially chain together a series of smaller rollovers, allowing for an extended period of personal loans far beyond the 60-day period. For instance, an individual with a $100,000 IRA could take a $20,000 distribution, and then 59 days later take a second $20,000 distribution to repay first, and then another 59 days later take a third $20,000 distribution to repay the second, etc., ultimately stretching out a $20,000 60-day rollover into series that spans more than 9 months before the final $20,000 replacement must be made. 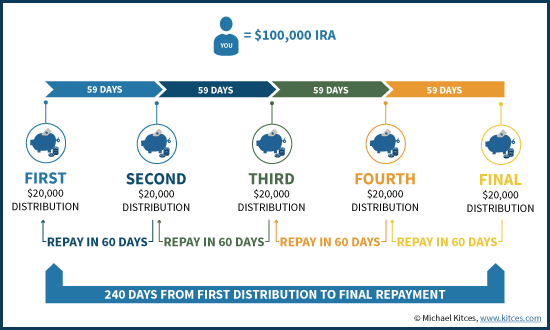 Notably – in part to ease administration and oversight – the IRS interpreted this once-per-year rollover rule to apply on an IRA-by-IRA basis. Thus, as explained in Publication 590, if an individual had IRA #1 and IRA #2, and took a distribution from IRA #1 and did a 60-day rollover to new IRA #3, then for the next 12 months there could be no new IRA rollovers from accounts #1 or #3. However, any distributions from IRA #2 would remain eligible for a rollover, since that particular IRA had not been involved in a rollover (yet). 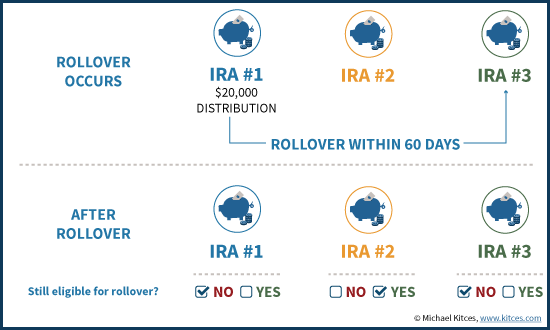 In addition, under long-standing Revenue Ruling 78-406, a transfer that is handled as a direct trustee-to-trustee transfer (from one IRA custodian to the other, without ever having the funds paid out directly to the IRA owner themselves) does not actually count as a “rollover”, and thus does not have the 60-day requirement nor trigger the start of a 1-year period for preventing subsequent rollovers.

Bobrow v. Commissioner And The Use Of Sequential Separate IRA Rollovers As An Extended Loan 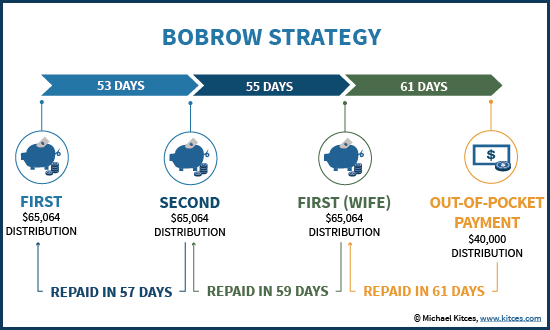 This kind of sequential loan strategy was indirectly based on the IRS’s view that the 60-day rollover period applies separate for each IRA under the aforementioned guidance in Publication 590. However, in the process of executing the strategy, Bobrow made a mistake – the final rollover to his wife’s IRA accidentally occurred after 61 days, violating the 60-day rollover rule. In addition, the final rollover contribution to the wife’s account was only $40,000, and not the full $65,064. (Bobrow claimed that he had made a timely request to complete the last rollover and that he had requested the full $65,064 and therefore should have been in the clear, but couldn’t produce any evidence to substantiate this.) Given that the last rollover was not complete, it was reported as being partially taxable, but Bobrow disputed it, which is what ultimately drew the IRS’ attention.

In Tax Court, the IRS did acknowledge the separate IRA rule, but nonetheless maintained that since IRA #2 was involved on both sides of a rollover (as the distribution from #2 was repaying #1, and a later distribution was then also used to repay #2), it should be ignored as an intermediary step, and that under the step transaction doctrine the whole arrangement should be treated as a single IRA rollover that started when the money came out of IRA #1 and ended when the money was repaid into IRA #2 (which would mean it violated the 60-day rule).

In the end, the Tax Court not only supported the IRS’ decision, it went even further, and declared that since under IRC Section 408(d)(2) that IRAs are aggregated together for income tax purposes, that the aggregation should apply for the once-per-year rollover rule as well. In other words, in the Tax Court’s view, once a distribution is taken from any IRA that an individual owns (and is subsequently rolled over), the 12-month blackout period for 60-day rollovers will apply for all of that individual’s IRAs! In other words, the once-per-year rollover rule would apply across all the IRAs, even if different IRAs were involved in each rollover transaction. Notably, this meant the Tax Court even overrode the IRS’s own Publication 590, as in the Tax Court’s view, once a 60-day rollover occurs from IRA #1 to IRA #3, then no 60-day rollover can occur from any IRA for another 12 months, including the previously untouched IRA #2!

Shortly after the Bobrow decision, the IRS issued Announcement 2014-15, in which it declared that it would acquiesce to the Tax Court regarding the rollover rule and begin applying it on an aggregated basis across all IRAs (and change the wording in Publication 590 accordingly). However, to allow time for it to update its rules, and as a form of amnesty for those who were previously relying on its “old” guidance, the Service declared that it would not begin to enforce the rules until 2015 (so those who were in the midst of rollovers already would have until the end of the year to wrap them up). 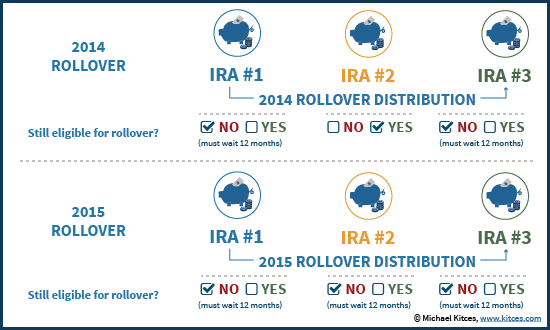 These transition rules will effectively apply for just 2015, as by 2016 any/all prior IRA rollovers will have occurred since January 1st 2015, and thus all IRA rollovers will be subject to the new (aggregated) rules for determining the 1-year waiting period.

In Announcement 2014-32, the IRS also clarified the treatment of certain other types of rollovers and transfers that do not trigger the 1-year waiting period for any other 60-day rollover, and are not restricted to being done if already within a blackout period due to another rollover:

- Conversion from a traditional IRA to a Roth IRA

Beyond the transition rules, though, the simple reality is that under the new once-per-year 60-day rollover rules, the kind of sequential-rollover “extended loan” strategy that Bobrow (and others) have engaged in over the years is now dead. Although a single 60-day rollover could still theoretically be used as a temporary short-term loan (but be very cautious to complete it in the requisite 60-day time window!), chaining together multiple rollovers is just no longer feasible. And in fact, those who otherwise do 60-day rollovers from time to time – for any reason – need to be cautious in recognizing that such a rollover from any one IRA can trigger the waiting period and invalidate a subsequent rollover from any other IRA within a year!

Of course, the reality is that most IRA transfers are already done as a trustee-to-trustee transfer, which both avoids the risk of violating the 1-year waiting period, and does not trigger the start of a new one either. And for most who simply want to transfer IRA funds, the trustee-to-trustee transfer remains the best path. But for those who want and need to do a 60-day rollover for other purposes – e.g., where just transferring the money isn’t enough, or isn’t the sole goal, because the IRA owner actually wants to take possession of the funds and “use” them for a period of time – it will become more important than ever to monitor when other IRA rollovers have been done, as the 12-month waiting period is now broader than ever!