Identifying centers of influence has been useful and effective for businesses and advertisers as long as people of influence have wielded power in their communities. Historically, though, the challenge has been that it's not always clear who is influential, especially in relatively narrow niches. However, as the use of social media continues to grow and evolve, quantifying influence, at least through social media channels, is becoming possible for the first time - and companies are jumping quickly to fill the void.

The current leader in this space is a company called Klout, which seeks to make itself the standard of measuring (online) influence. While thus far the company is relatively new and its impact is limited, it is growing fast.  In fact, in some industries, an individual's Klout score is already impacting their ability to get a job, or their opportunity to receive discounts and perks from advertisers. While the time hasn't arrived yet, Klout may soon become relevant in the world of financial planning as well, for everything from increasing the visibility of an influential planner, to identifying centers of influence to contact in a target niche market. Which raises the question: do you have Klout?

(Editor's Note: This article was originally published as a guest blog post for Wired Advisor, a platform that helps financial advisors build a powerful online presence, create compelling content, and implement a smart social media strategy. You can follow Wired Advisor on Twitter at @WiredAdvisor.)

If you're not familiar with Klout, the basic principle is that the company looks at an individual's online social media activity - primarily Twitter, Facebook, and Google+ (and to a lesser extent, LinkedIn and some other platforms) - with the goal of measuring how "influential" someone is. In the case of Klout, the "influence" term is used almost literally - Klout seeks to measure an individual's ability to actually drive their audiences to action, such as following links, engaging, or (re-)sharing content.

Ultimately, Klout merges these three factors - True Reach, Amplification, and Network - into a single "Klout score" that ranges from 1 to 100. Notably, though, scores are not evenly distributed. The average Klout score is about 20. A score of 50 is actually close to the 95th percentile. In addition, it becomes increasingly more difficult to increase a Klout score as it rises; thus, rising from 70 to 75 is far more difficult than going from 20 to 25. Given that the financial planning world itself is only "so" large, even the most active financial planners on Twitter typically have Klout scores that are "only" in the 50-60 range. A distribution of Klout scores, compiled as a part of an infographic by TheDegree360, is shown below. 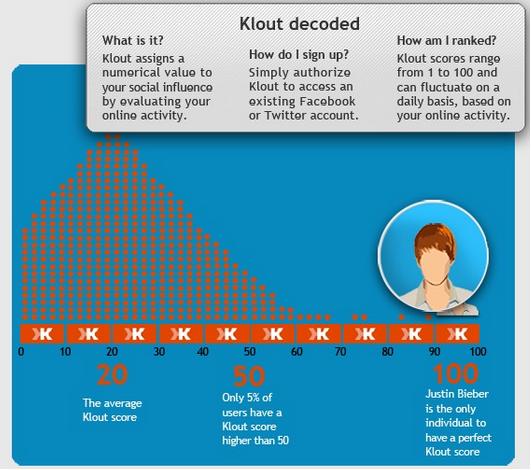 Why Does Klout Matter

A recent article in Wired magazine provided a good explanation of why Klout may soon matter in the real world. The key is to view the issue from the perspective of a large company that delivers products or services to the marketplace. A challenge of such companies has always been that not only do products often succeed as happy customers share with others, but catastrophes can similarly spread by word of mouth. But of course, the reality is that not everyone's good and bad review is the same - those are have larger networks and are more influential wield far more influence and can more significantly impact the business. Just ask any restaurant when the media food critic comes through.

The distinction, though, is that in the past, finding "influencers" was often quite difficult. Those in the media like food critics might have been visible, but beyond that it was often hard to perceive who was sharing what. But in a social media world - where the activity is visible and the web, and generally quite public, it can be quantified in a manner never before seen.

The end result has been an explosion in how social media relevance is starting to influence the world, from companies that triage complaints based on Klout scores (since those with more influence can more rapidly damage the company's reputation by sharing complaints with their network), to advertisers who want to find out who's influential in their product space, to businesses - especially in the marketing and social media space itself - who look to an individual's Klout score to decide if that person is "influential enough" to merit a job offer.

So why will Klout (or some similar service to it) likely matter for financial planners in the near future? There are several reasons why Klout is relevant.

First of all, Klout can simply be a useful tool for deciding who to follow in the social media world in the first place. Given that it's possible to "buy" fake Twitter followers for cheap, with similar services for Facebook fans, simply looking at the number of followers or fan page likes is not a particularly reliable way to judge how influential and relevant someone is in the social media world.

Klout, on the other hand, analyzes the characteristics of the underlying followers/fans, and how often they engage with the user; as a result, it's an effective tool to differentiate between those who have genuine social media engagement versus those who acquired followers/fans by other means. Notably, though, Klout also scores Facebook, Google+, and other social media scores into one composite score, so a lot of activity on one channel (generating a high score) isn't necessarily indicative of engagement on multiple platforms.

Second, in a more targeted manner, Klout can also be useful for those seeking to identify online influencers in a target market or niche, especially if people in that niche use social media. In reality, this is no different than the standard approach of trying to reach a niche market by interacting with centers of influence; with Klout, though, it's possible to begin identifying centers of influence online and begin engaging virtually.

Similarly, those who wish to expand a presence and engagement in a target market may also wish to monitor and try to increase their own Klout score, as a way to signal their relevance in their target market. Just as planners targeting a niche might follow those with high Klout scores, having a high Klout score in a niche can be a sign for others to follow you!

Accordingly, steps that engage online in a target niche and raise an individual's profile in that niche can also support the Klout score, further reinforcing the individual's influence to those seeking to engage. And if Klout continues to become more visible, at some point people may find you as a center of influence in your target niche specifically because of your Klout score - further supporting an inbound marketing approach to building a financial planning business.

Notwithstanding the aforementioned benefits of Klout, there are a few caveats to be aware of.

The first is that, overall, Klout has been viewed controversially in the social media world. In part, it's simply because it assigns a "score" to a person's online influence - inevitably leading to people who feel insulted that Klout isn't giving them the recognition they believe they deserve. That being said, though, Klout is clearly limited to only measuring online, social media related influence; so while it holds itself out as "the standard of influence" the reality is that Klout likely only measures a subset of that. Already, though, alternative platforms like Kred have appeared that are trying to incorporate online and offline influence into a "better" score.

Another problem with Klout is that its scoring system itself - the algorithm used to determine who has social influence - is kept very secretive. On the one hand, Klout defends this secrecy as necessary; otherwise, users could potentially find ways to game the system and artificially boost their Klout scores. Google keeps much of the details of its search engine relevance algorithm a secret for the same reason. Nonetheless, many people have criticized Klout because the scores lack transparency, requiring you to take their score at its word, for better or for worse. While Klout's rising popularity suggests that its scoring mechanism is at least doing a pretty reasonable job, the ambiguity about the details of its system contributes to the controversial nature of the platform.

In addition, there are some legitimate criticisms to some other parts of Klout's system. For instance, in addition to scoring an individual's social media influence, Klout also tries to tie the individual's relevance to specific topic areas, with varying levels of success. While the system sometimes comes up with good topic labels, it also occasionally suggests people are "influential" in topics quite unrelated to their areas of expertise. Furthermore, some dispute Klout's weightings of various social media platforms; for instance, Facebook activity appears to garner more weight than a seemingly comparable level of Twitter engagement.

Notwithstanding these concerns, though, the reality is that identifying people who are centers of influence in their community or niche has been important information for everyone from businesses to advertisers long before social media or the internet even existed. The only difference is that Klout uses quantifiable measures to evaluate influence and engagement - metrics that have become available due to the rise of the internet and various social media platforms. Whether Klout itself remains the leader in this space, or is taken over by a newer, better offering, remains to be seen. But in the end, as long as identifying and connecting with influencers remains relevant, so too will systems that seek to measure it.

So what do you think? Have you signed up for Klout? Does the service sound useful or relevant to you? Have you checked anyone out on Klout? Have you ever checked your own Klout score?