For retirees who are more concerned about running out of money in retirement than leaving a large inheritance behind, the optimal retirement asset allocation strategies shift from focusing on wealth maximization and owning as much in equities as you can tolerate (to provide the greatest return on average), to approaches that do a better job of preserving wealth in adverse scenarios (even if it costs excess upside when times are good).

This retirement approach of focusing on minimization to spending risks over maximization of wealth accumulation has led to a wide range of retirement asset allocation and product strategies, including the use of annuities with guarantees, bucket strategies with cash reserves, and most recently the “rising equity glidepath” approach where portfolios start out more conservative early in retirement and become progressive more exposed to equities over time as bonds are spent down in the early years.

The caveat of risk minimization strategies, though, remains the simple fact that most of the time, they turn out to be unnecessary, as the risky event never actually manifests. As a result, tools like Shiller CAPE that allow advisors to understand whether clients are more or less exposed to a potential decade of mediocre returns (which brings about the “sequence-of-return risk” in retirement) can be remarkably effective at predicting when it’s necessary to focus on risk minimization in the first place, and when wealth maximization may be the more prudent course.

In fact, as it turns out, market valuation measures like Shiller CAPE can actually be so predictive of the optimal asset allocation glidepath in retirement, that the best approach may not be to implement a rising equity glidepath or a static rebalanced portfolio at all, but instead to adjust equity exposure dynamically based on market valuation from year to year throughout retirement. While this kind of tactical asset allocation approach is not necessarily a very effective short-term market timing indicator, the results suggest nonetheless that it can help to minimize risk when necessary, take advantage of favorable market returns when available, and have some of the best of both worlds – albeit with the caveat that markets can still deviate materially in the short run from what valuation alone may imply regarding long-term returns!

In our original research on equity glidepaths in retirement, Wade Pfau and I tested a wide range of asset allocation strategies in retirement, from the “traditional” advice to decrease equity exposure as the retiree ages, to simply holding a static portfolio that is regularly rebalanced, to actually starting the portfolio more conservative and allowing equity exposure to rise along the retiree’s time horizon. And contrary to prevailing wisdom about taking equities off the table as a client ages throughout retirement, our results found that for those who wish to protect against the most adverse outcomes, owning a more conservative portfolio to start and allowing equities to drift higher in retirement can actually be a more effective approach. Retirees who adopted a conservative starting portfolio with a rising equity glidepath finished with less wealth on average (as most of the time, the sequence of returns in retirement are not actually disastrous and owning less in equities just results in less compounding wealth!), but nonetheless for those who were willing to trade off wealth maximization in most cases for risk minimization for the few times it matters, the rising equity glidepath showed a modest but persistent benefit by aiding the portfolio’s sustainability in the worst sequences.

Still, the fact that most of the time a retiree doesn’t have a terrible sequence of returns at the start of retirement, and therefore usually wouldn’t need a rising equity glidepath, raises the question of whether anything can be done to predict when bad sequences are likely to occur. After all, if you knew that there was less danger of getting a decade of mediocre returns in the first place, you would be less likely to need to implement a rising equity glidepath to protect against such a bad sequence.

And is it turns out, getting a decade-long unfavorable sequence of returns is not entirely random after all; such sequences can be at least partially predicted by long-term valuation measures like Shiller CAPE, which are a poor predictor of short-term performance (and therefore a mediocre market timing indicator) but a remarkably powerful predictor of long-term performance. Which means there is the potential that if Shiller CAPE can predict the danger of an extended sequence of bad market returns, it can predict which type of asset allocation glidepath is most likely to be necessary to navigate retirement itself.

To test this perspective, we decided to replicate a version of our prior glidepath research, but instead of using Monte Carlo analysis built around a wide range of possible return assumptions, we tested the results against actual historical market returns, where we can also examine the potential role of the market’s starting valuation at the beginning of retirement. We’ve already seen that market valuation can predict the safe withdrawal rate in retirement, but can the optimal retirement glidepath itself also be predicted by market valuation at the onset of retirement?

Accordingly, the chart below shows the safe withdrawal rate that would have worked depending on whether markets were overvalued, fairly valued, or undervalued at the start of retirement, segmented by whether the portfolio uses a combination of stocks and bonds (dotted lines), versus using stocks and Treasury Bills instead (solid lines), and whether the equity exposure is based on a fixed 60% allocation (yellow lines) or a portfolio that adopts a(n accelerated) rising equity glidepath starting at 30% in equities and increasing by 2%/year for 15 years (leveling off at the same 60% equity exposure for the second half of retirement) (green lines). (Michael’s Note: In the results based on historical data, a full 30-year rising equity glidepath was not an improvement over a static portfolio, suggesting that historically mean reversion has been powerful enough that waiting all 30 years to execute the glidepath is just “too slow”; by contrast, 15-year rising equity glidepaths that align better to typical long-term mean reversion appeared to yield far more favorable outcomes.) 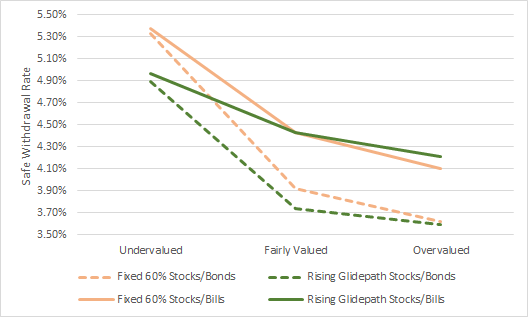 As the results reveal, the optimal glidepath really does vary depending on the starting valuation environment of the markets. When markets are overvalued, the rising equity glidepath shows a slight improvement over a static 60% equity portfolio, but when markets are fairly valued the strategies are equivalent, and when undervalued the static 60% equity portfolio is clearly superior.

Notably, the results also show that in overvalued environments, using stocks and Treasury Bills is actually superior to using a more traditional stock/bond portfolio – in essence, the retiree is not paid to take on bond/interest rate risk in environments where stock risk is also elevated, and it’s better to utilize Treasury Bills that can act as ballast against the market volatility! – while when stocks are favorably valued, using a stock/bond portfolio yields an equivalent safe withdrawal rate to using stocks and Treasury Bills.

Accordingly, a “valuation-based” tactical asset allocation approach was created, where the portfolio starts out at a “neutral” 45% in equity exposure, increasing to 60% in equities when markets are “cheap” and undervalued, decreasing to only 30% when markets are “expensive” and overvalued, and remaining at the neutral 45% in equities when markets are fairly valued in the middle (where the thresholds again are defined using the Graham and Dodd 2/3rds and 4/3rds thresholds). The chart below shows where these thresholds would have fallen relative to Shiller CAPE (P/E10) historically, and the asset allocation changes that would have occurred over the decades. 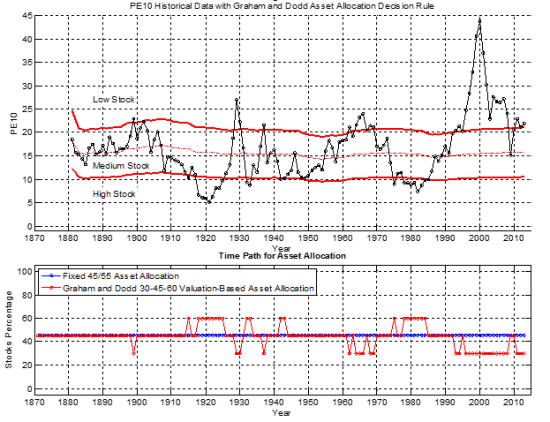 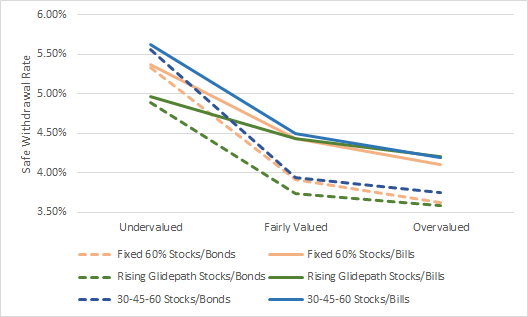 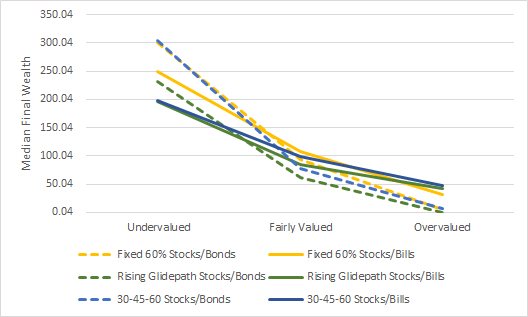 Overall, though, the conclusions remain that whether based on safe withdrawal rates as a measure of minimizing risk, or median wealth as a measure of maximizing wealth accumulation, the valuation-based tactical portfolios (that start at 45% in equities but fluctuate between 30% and 60%) appear to do slightly better than either a fixed 60% equity exposure or a rising equity glidepath. When market valuation starts out unfavorable, the valuation-based portfolio starts out similar to a rising equity glidepath, but is able to more quickly adjust to higher equity allocations if valuation becomes favorable. By contrast, when valuations start out favorable, the valuation-based portfolio starts out similar to a fixed 60% equity portfolio, but becomes more conservative when necessary to avoid damaging drawdowns.

Notably, this still doesn’t necessarily mean that the valuation-based approach will be especially good as a short-term timing indicator – these results are compounded over 30 years, not based on annual or quarterly reporting compared to a benchmark, and are likely driven by the fact that they minimize bear markets only by missing part of the final stage bull market that precedes them, and similarly participate in bull markets by investing amidst the tail end of a bear market (and potentially bearing the final stages of volatility along the way). In addition, the results do show that valuation-based tactical portfolios still vary as to whether they should be implemented with bonds or Treasury Bills; valuation-based portfolios may still be better using stocks/bills when valuations are high, and stocks/bonds when valuations are low.

Nonetheless, the bottom line appears to be that while rising equity glidepaths are best in certain (overvalued) environments and that fixed portfolios are better in other (undervalued or fairly valued) ones, that simply allowing equity exposure to shift from year to year tactically based on the market valuations as they change dynamically throughout retirement may be most capable of capturing the best of both worlds, at least for the investor focused on long-term results that is less concerned about short-term performance deviations. Given today's valuation environment, where Shiller P/E10 really is at elevated levels, this would suggest that conservatism is still merited for today's retirees, either by owning less equities with an expected rising equity glidepath, or at least underweighting them on a valuation basis until the valuation moves into the "fairly valued" zone.

For those interested in Wade's perspective on this research, he has a post up on his blog about sequence of return risk and how glidepaths and valuation-based asset allocation manage it, and you can see the results of our latest analysis in full depth, including the impact of further valuation-based adjustments to rising and declining glidepaths, and the impact of portfolios that are “unbounded” and can stray even further than the 30% and 60% equity thresholds, by viewing the full copy of the draft research of the study “Retirement Risk, Rising Equity Glidepaths, and Valuation-Based Asset Allocation” on SSRN.

As always, we welcome your thoughts, criticism (constructive, please!) and other feedback below in the comments below!

On May 13, See Behind the Scenes of Successful Advisor Marketing
Learn More