The inspiration for today's blog post is some recent conversations I've had with other planners, who have questioned whether the safe withdrawal rate research is still relevant in today's low return environment. "In the 'new normal'", the planner usually states, "returns are likely to be lower than historical averages for both stocks and bonds. Doesn't that mean historical safe withdrawal rates are unrealistic?"

Safe withdrawal rates are determined by looking at the initial withdrawal rate, with that dollar amount adjusted each subsequent year for inflation, that would have worked given the actual sequence of stock, bond, and inflation that occurred during the historical time period. For instance, the chart below shows the safe withdrawal rate that would have worked for a 30-year time horizon for each rolling 30-year time period in the past 140 years (using publicly available data from Professor Shiller at Yale); the chart assumes a 60/40 portfolio (invested in large-cap stocks and intermediate-term government bonds) that is rebalanced annually after the actual stock and bond returns for that year, where spending adjusts each year based on the actual rate of inflation for the 30-year time horizon, and returns are modeled based on the actual sequence that markets delivered in that particular rolling 30-year time period. 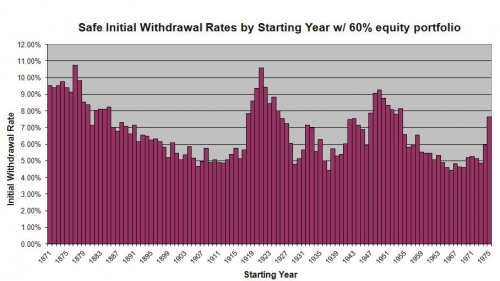 And of course, if a 4.5% withdrawal rate is used in virtually any other environment, the client will simply have funds left over, or can raise spending along the way; in point of fact, the safe withdrawal rate actually has a 96% probability of leaving more than 100% of the original starting principal! On the other hand, if the client actually lives through one of those historical worst case scenarios, the withdrawal rate is just low enough to sustain withdrawals for the time period.

So if safe withdrawal rates are based not on average returns but "worst case scenario" returns (at least, the worst we've seen in history), just how bad are those returns? The chart below shows the 30-year average annual compound growth rate for stocks and bonds for the four worst historical safe withdrawal rate scenarios, which all produced safe withdrawal rates in the 4% to 4.5% (depending on exactly which data set is used).

Notably, there appears to be little relationship between the nominal returns of stocks and bonds over 30 years, relative to the long-term average, given that these are all worst-case scenarios for safe withdrawal rates. Some had average equity returns, others did not. Some had above-average bond returns, others had below-average results.  Some had above-average inflation, and others had below-average inflation. In fact, over the entire 140-year time horizon, neither the 30-year return in stocks nor bonds had much of a relationship to the associated safe withdrawal rate; the correlation of 30-year stock returns to safe withdrawal rates is a not-significant -0.09, and the 30-year bond return isn't much better at -0.15.

In part, the lack of relationship between long-term returns and safe withdrawal rates is because ultimately, when taking withdrawals, it doesn't matter if returns average out in the end, because a period of 10-15 years of low returns means there may be little or no account balance remaining when the good returns finally arrive for the last half of retirement. Accordingly, while 30-year returns have little relationship to safe withdrawal rates, returns over the first 15 years of the retirement time horizon have a much stronger relationship; in fact, the 15-year real (inflation-adjusted) return of the portfolio actually has a whopping 0.91 correlation to the safe withdrawal rate, as shown in the graph below. (And notably, these low-return environments are actually predictable from market valuation, given a -0.65 correlation between Shiller P/E10 and safe withdrawal rates, but that's a discussion for another day!) 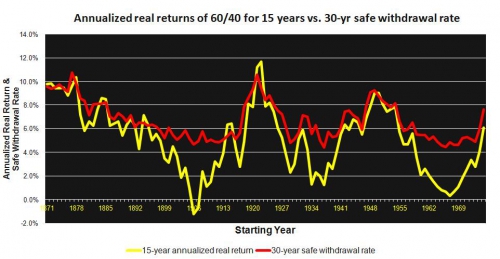 The average real return on a 60/40 (re-)balanced portfolio associated with the worst safe withdrawal rate scenarios in history was a mere 0.86% average annual compound growth rate over the first 15 years of retirement. In point of fact, this was actually driven by a slightly negative real return in bonds (at -0.15%) and a slightly positive real return in equities of 0.73% (the reason the rebalanced portfolio returns were slightly higher than the returns of stocks or bonds separately was due to the favorable market timing of some of the rebalancing trades).

So what would this look like in the current return environment? With nominal inflation trending just over 2% and a 15-year government bond yielding just below 2%, the projected 15-year real return on bonds is projected to be slightly negative - suggesting that bonds are currently in an environment similar to historical worst case safe withdrawal rate scenarios.

Similarly, the current dividend yield on the S&P 500 is approximately 2%, suggesting that any real return in equities from here must come from price appreciation. However, the historical record shows that the "worst case scenarios" typically generate less than 1%/year in real returns for 15 years. Thus, generating a comparable real return for equities would assume no more than approximately 16% cumulative price appreciation from here; with an S&P 500 price level of approximately 1,350, this would driven the S&P 500 back to 1,567 in 2027, putting it at almost the exact same level it was at its peak in 2007 before the onset of the financial crisis and recession.

Viewed another way, what the data shows is that if you expect the coming safe withdrawal rates from here to be worse than anything seen in history, you need to assume not just below-average returns; you need to assume that the stock market cannot generate more than 1% real returns between now and 2027 given a 15-year real bond return of 0% at todays rates, and that if inflation increases from here that equities will fail to increase dividends dollar payouts, grow earnings, or provide any effective hedge to inflation whatsoever.

Given this reality, it's notable that merely getting 'new normal' returns of low single digits would actually represent not a risk to historical safe withdrawal rates; it would actually be an upside surprise that would result in materially higher lifetime spending! It would only be appropriate to assume a safe withdrawal rate lower than the historical 4% - 4.5% rate if you believe that equities will fail to deliver even a 1% real return over the next 15 years, implying (given current dividend and inflation levels) that the S&P 500 price level will be lower in 2027 than it was in 2007 (which would also be lower than it was in 2000, resulting in no appreciation for 27 years!).

So what do you think? Do you expect that the market 15 years from now still won't be any higher than it was 12 years ago, and that equities will generate a real return of less than 1% between now and the second half of the next decade? Would it impact your recommendations given that safe withdrawal rates are based on not on average returns, but less-than-1% real returns for 15-year time periods?

For your participation, we will send you a full copy of the Kitces Research Study when it’s done.

And you can help to shape the content that we create for you in 2022.