Starting savings efforts young, and taking advantage of the wonder of compounding interest, is a long-standing staple of financial planning advice. The longer the time horizon, the less that needs to be saved to achieve a retirement goal. Yet the caveat of such an approach is that while it's crucial to start saving initially, after the first decade or two the ongoing contributions have less and less impact, as the results are increasingly dominated - for better or for worse - by the portfolio returns.

In fact, by the time the retirement date approaches, the outcome becomes so dependent upon returns, that a poor final decade of performance can drastically derail the entire retirement plan. Saving steadily to grow a portfolio over the span of 40 years begins to look more like saving half the goal in the first 30 years, and quickly doubling the account balance and retiring. Of course, when viewed from this perspective, it suddenly becomes clear that the save-a-little-for-a-long-time approach to retirement is far riskier than most realize.

Ultimately, that doesn't mean people shouldn't start saving early for retirement. But it does recognize that a retirement plan that is heavily reliant on returns can have highly adverse outcomes, where the risk is not just the potential that wealth is significantly less than originally projected, but that retirement will have to be delayed significantly further than originally planned. In fact, perhaps it's time to talk less about risk as standard deviations and the volatility of wealth, and more about retirement date risk and the volatility of when the client will be able to retire, instead?

The mathematical benefits of starting saving early are relatively straightforward; to have $1,000,000 in a portfolio at retirement, assuming an 8% growth rate, it takes about $300/month of savings with a 40-year time horizon, but it's almost $700/month over 30 years, nearly $1,050/month with 25 years, and about $1,700/month with 20 years. As the time horizon shortens, the savings requirement balloons even further. Thus, as the saying goes, you should just start earlier, which allows you to save less by letting time be on your side.

However, the reality is that as the account balance rises - due both to the accumulation of ongoing contributions, and the annual compounding of growth itself - each additional contribution actually has less and less of an impact on the annual increases of the balance over time. In fact, while in the early years the results are dominated by contributions - the growth doesn't amount to much yet when there's hardly any money in the account in the first place - by the later years, returns are the driver for almost all of the increases in the account balance as it drives towards the final goal. In other words, while there's a benefit to starting early to enjoy the benefits of compounding growth, it actually makes the outcome remarkably reliant on returns in the final years; shortfalls towards the end simply cannot be made up with new contributions alone. 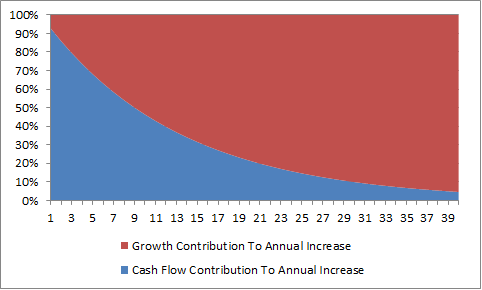 Notably, the results of this graph also have significant implications for young investors and the value that advisors can bring to them. Given that the impact of returns is very limited in the early years, surprisingly this means that adding alpha, or even just setting up a good asset allocation for proper exposure to beta, actually has very limited value to young savers. How you save matters far less than the mere fact that you save in the early years. Making good investment decisions actually just doesn't have much material impact until someone has been compounding savings - or at least accumulating contributions - for a decade or more. On the other hand, the reality is that cash flows contribute to less than half the increase in the account balance by just year 10, and a fairly trivial amount overall for the entire second half of the savings time horizon.

The problem with a strategy that becomes increasingly reliant on returns over time is that it leaves the prospective retiree highly prone to disappointment if market returns do not add up as anticipated in the final years. In fact, another way to look at the situation for the long-term saver at age 25 aiming for a 40-year time horizon is to recognize that it is so reliant on compounding, that the goal to save $1,000,000 by age 65 is really more like a goal to save almost $500,000 by age 55, and then "just quickly double it and retire" a decade later (since the contribution from cash flow savings is almost negligible at that point). As the chart below shows, the 25 year old who accumulates $1,000,000 by age 65 is just barely crossing the $500,000 line around age 55! 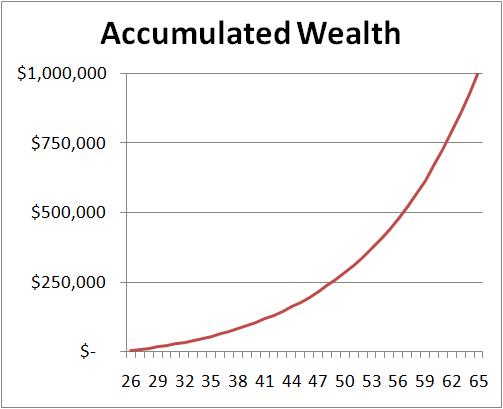 Of course, few planners would suggest that it's a good idea to count on market returns to double your account balance in any particular decade, but nonetheless that's actually the outcome necessitated by the approach! As the above chart reveals, accumulating long-term wealth with steady savings is actually remarkably reliant not just on getting the projected long-term return for 40 years, but on getting the necessary return to double your money in just the last 10 years when it matters the most.

In other words, just as there's a significant "sequencing risk" to retirement - such that we need to take a safe withdrawal rate well below the anticipated growth rate just to protect against poor timing of bad returns - so too is there a significant sequencing risk to accumulating for retirement. It's just that for accumulators, the "risky" sequence is when the bad returns occur at the end (whereas for retirees it's about bad returns at the beginning).

Ultimately, this means that planning for a 25-year-old to save a small amount for the long-term today, with a plan of retiring at age 65, amounts to making a gargantuan bet that market returns will be favorable from 2043 to 2053 to make the plan work out. A rather bold prediction for a 10-year time horizon that won't begin for 3 decades! Of course, that's also indirectly the bet that a baby boomer born in 1946, who was making about the last 10 years before retirement from 2001 to 2011; unfortunately, in that scenario the crucial 10-year time horizon at the end of the accumulation years did not turn out as hoped, an unfortunate case-in-point example of the issue.

Not only are the outcomes of an accumulation plan driven increasingly by returns in the later years, but longer term plans with longer time horizons are even more impacted by adverse investment results, because they're more reliant on compounding investment returns. For instance, if returns turn out to be only 6% instead of 8%, the 40-year time horizon at about $300/month winds up with only $586,000 instead of the originally projected $1,000,000. On the other hand, for the 20-year time horizon with $1,700/month of savings the "lower performance" scenario is still at $789,000 of savings. While the savings is higher with fewer years, the sensitivity of the income to returns is lower because of it. The same is true if the longer-term retiree simply chooses to save more and invest more conservatively as well.

Viewed another way, a shorter (or more conservative return) path may require greater savings, but it also has less risk about whether the target retirement date will be achieved (or whether it will be materially missed). Under the preceding scenario, where the return is a little low, the individual under the 20-year plan just has to keep what he/she was already doing for only 3 more years to get back to the original $1,000,000 goal; by contrast, the 40-year plan is delayed by more than 8 years. Or to put it into a real context: the shorter-term and less return-centric saver aiming to retire at 65 is only delayed until 68, while the longer-term saver is actually delayed all the way past age 73 with the same adverse outcome. In other words, the risk of a materially delayed retirement is drastically higher with the long-term low-savings-with-compounding approach.

In fact, this approach arguably presents an alternative and better way of viewing the risk of unfavorable market returns. Taking an approach built on the base of lower savings and a longer time horizon (or an approach outright depending on high returns), clients should consider the scenarios based not on the volatility of the wealth outcome, but the uncertainty of the retirement date. For instance, the graph on the left below shows a traditional view of volatility and risk - a range of how high the account balance will rise after 40 years (before it gets spent down through retirement) - while the graph on the right shows volatility and risk in the context of the retirement date. The greater the dependency on returns - and their associated uncertainty - the wider the range of potential wealth outcomes (on the vertical axis), and the wider the range of retirement date outcomes (on the horizontal axis). But ultimately, the range of retirement dates, and the potential length of delay, may actually be a more relevant (and motivating?) factor for clients! "Your plan has a 20% chance of not having $1,000,000" is hard for clients to internal, but "Your plan has a 20% chance of delaying your retirement by 6 years" is a much more tangible risk/reward trade-off to consider.

The takeaway to all of this is not to say that people should delay saving for retirement to make themselves less dependent on returns, but is simply to recognize that the more reliant the plan becomes on returns - whether due to using high-risk high-return investments, or low savings built upon an extremely long time horizon - the greater the risk to the retirement date itself, and the greater the likelihood that the outcome could be materially different than originally planned. Following a plan with a high reliance on key returns in a small number of years leading up to retirement leads to a concentrated exposure to risk. In some cases, prospective retirees may still wish to take such risks... but perhaps it's time to acknowledge the ramifications of such risks not in standard deviations of returns and wealth but in real world outcomes of potential retirement delays and retirement date risk.