In this new column I'm calling "On the nighttable..." I will be highlighting some of the books that I'm reading. Right now, I'm just finishing up a book called "Stabilizing an Unstable Economy" by Hyman Minsky. But the interesting thing is not just that it's another book on stabilizing the economy... it's that Minsky wrote it several decades ago, yet it is nonetheless remarkably prescient about the events of the recent years!

Financial Instability And The Minsky Moment

Hyman Minsky was an economist with a unique perspective. Although he was of the so-called "Keynesian" school of thought, he believed that much of the economics community of his era (and arguably, since then as well) had misinterpreted and diluted much of Keynes' original message.

One of Minsky's most notable contributions to the body of knowledge was his financial instability hypothesis - in essence, a view that suggested the natural course of the economy was to breed its own endogenous instability until eventually it reached a tipping point - or as many have dubbed it in this context, a "Minsky moment" - that would cause a financial crisis and force intervention to prevent a subsequent debt deflation and deep depression.

The basis of Minsky's views on financial instability were that, in essence, financial stability itself allows for an environment of increasing risk-taking and financial innovation, until eventually the system destabilizes itself as debt borrowing progresses from "hedge" borrowers (those who borrow with the ability to make principal and interest payments) to "speculative" borrowers (those who borrow to make interest payments but must keep rolling over the debt principal) to "Ponzi" borrowers (those who borrow to purchase assets that can only be afforded if the asset itself continues to rise in value). Eventually, an excess of Ponzi borrowers create an asset bubble that cannot be sustained, and when it "pops" the whole structure begins to unravel again. Notably, this has strong parallels to the progression of the mortgage crisis of the past decade, as Paul McCulley OF PIMCO pointed out in PIMCO's "Global Central Bank Focus" newsletter article in May of 2009. Consequently, Minsky has lately been enjoying (albeit posthumously) a renewed interest in his writings.

Minsky emphasizes that the nature course of profit-motivated businesses in a capitalistic economy is to eventually innovate to the point of instability; a significant departure from the "traditional" school of thought that the economy naturally progresses towards a stable equilibrium unless adversely impacted by an exogenous shock to the system or a policy mistake. Accordingly, Minsky notes that one of the key roles of government is a more aggressive form of regulatory oversight; otherwise, regulators tend not to enact significant reforms until after a crisis, which inevitably addresses the evils of the past and fails to account for the new innovations of the future, which ultimately begins the destabilizing process anew. As a follower of Keynes, Minsky was also a supporter of "Big Government" to help stabilize the economy, although notably many of his policy recommendations differ from how Keynesian-style government spending policies are enacted today. 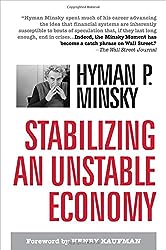 Overall, I found "Stabilizing An Unstable Economy" to be a pretty interesting read and perspective on our economic difficulties of the past decade, and some of the potential prescriptive policy solutions. The book itself is not a light read - there's some pretty dense economics here - but for those who want to explore another "less traditional" perspective on economics that nonetheless resonates in today's environment, check it out.