No one likes to pay any more in taxes than they have to; the less we’re taxed, the more we have money available for our own use, whether to consume or to save. Accordingly, it’s not surprising that there are many strategies available to try to (legally) reduce one’s tax burden.

However, in the case of FICA taxes, strategies that reduce earned income to avoid the tax also end out reducing the income used to calculate an individual’s Average Indexed Monthly Earnings, which in turn is used to determine future Social Security benefits. As a result, everything from S corporation dividend strategies to under-the-table cash payments that minimum payroll and/or self-employment taxes can also reduce that individual’s Social Security benefits as well!

In some cases, it turns out that the reduction in Social Security benefits is still worthwhile relative to the FICA taxes that can be saved. However, because of the so-called “bend points” used to calculate an individual’s Primary Insurance Amount under the Social Security rules, not all FICA tax avoidance strategies have the same consequences. For higher-income individuals, the foregone benefits can be minimal – or sometimes even zero – making the tax savings worthwhile, but for lower-lower individuals, the lost benefits can actually be quite high! In fact, those who don’t have enough years of income to qualify for Social Security benefits may even want to pay more in FICA taxes, to both increase their benefits and ensure that they can receive those benefits at all!

The Social Security benefit that an individual is eligible for at his/her full retirement age is called the Primary Insurance Amount (PIA), and benefits may then be reduced for those who start benefits early (as early as age 62), or increase with delayed retirement credits for those who wait (as late as age 70).

To calculate the amount of an individual’s PIA, the Social Security Administration first reviews the individual’s entire earnings history, and inflation-adjusts historical earnings up to a current wage equivalent (based on the national wage index). Once the earnings history has been adjusted, the inflation-indexed earnings from the highest (not necessarily consecutive) 35 years are added together, and divided by 420 (where 12 months/year x 35 years = 420 months), producing the individual’s Average Indexed Monthly Earnings (AIME) over their lifetime.

To actually convert AIME into the individual’s PIA, a replacement factor is applied. The PIA is increased by 90% of the first $826/month of AIME, 32% of the next $4,154/month (up to a total of $4,980/month of earnings), and 15% of the remainder (anything above $4,980/month) up to the maximum (the Social Security wage base). These so-called “bend points” – the crossover points where the replacement rate is decreased at higher income levels – are themselves annually indexed for inflation. 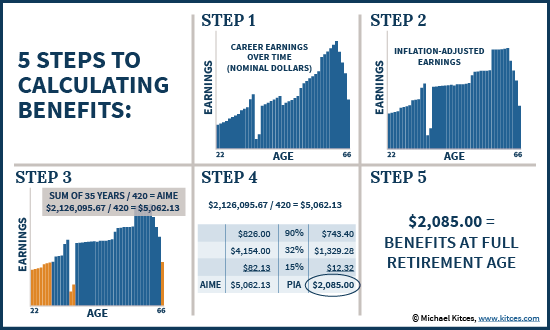 Notably, then, the end result of the formula for calculating Social Security benefits is actually little more than an “income replacement” formula, similar to the pension payable under a defined benefit plan. The only difference is that while corporate pensions might calculate benefits based on the last 3 years’ or 5 years’ worth of income, Social Security is based on the highest 35 years of income. In addition, while corporate pensions often calculate a flat replacement percentage (e.g., 60% of average salary earnings over the past 3 years), Social Security benefits are tiered (i.e., 90% of the first chunk of average earnings, 32% of the next segment, and only 15% of the rest), such that as earnings increase the replacement rate is lower. 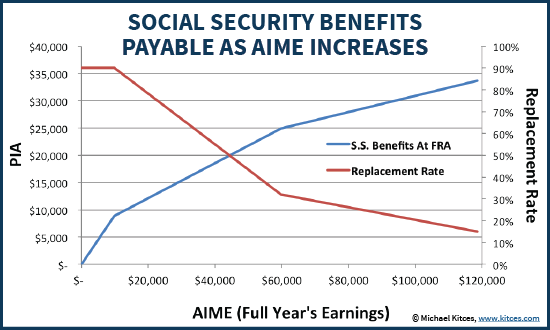 Notwithstanding this moderate differences, though, Social Security simply functions like most other pensions, providing a payment in retirement designed to replace a percentage of earnings generated during the individual’s working years.

FICA Taxes And The Social Security Wage Base

An important caveat to the general rule that Social Security benefits are calculated to provide replacement income in retirement is the fact that only certain types of income are included in the formula in the first place. Specifically, in order for income to be counted towards Social Security benefits, it must be earned income - i.e., generated from wages or self-employment income – and it must be taxed as earned income, which means it is subject to FICA taxes.

Technically, FICA taxes under the Federal Insurance Contributions Act applies two different taxes – the first is a 12.4% tax for Social Security benefits, and the second is a 2.9% tax for Medicare (15.3% total). In the case of self-employed individuals, they pay the entire 15.3% themselves (as “self-employment tax”); for employees, half (7.65%) is paid by the employee, and the other half is paid by the employer on his/her behalf as a part of payroll taxes. 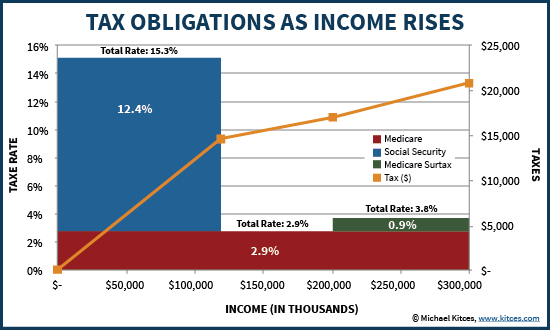 For instance, the popular strategy of converting a business to an S corporation so owners can be paid a modest salary (subject to FICA taxes) and take out the rest as S corporation dividends (not subject to FICA taxes) can actually reduce Social Security benefits if wages are brought so low they’re under the wage base. Similarly, shifting income from a lower income spouse (below the wage base) to a higher income spouse (above the wage base) can save the 12.4% Social Security share of FICA taxes for the lower earning spouse, but at the “cost” of potentially lower future Social Security benefits. And businesses – or employees – who operate on a cash basis to avoid reporting income at all for tax purposes successfully (albeit illegally!) exclude the income from FICA (and other) taxes, but also exclude it from the formula determining Social Security benefits as well.

So how much can “avoiding” taxes actually impair Social Security benefits? Notably, the impact actually depends heavily on the existing earnings the individual already has in his/her record. Given that AIME is calculated as a 35-year average, technically that means each year of additional income adds 100% / 35 = 2.86% of its value to AIME. For instance, someone who earned $60,000/year (or $5,000/month) would increase AIME by $142.86 (assuming he/she didn’t already have 35 years of earnings). If he/she had lifetime earnings below the first bend point, 90% of this would be received back in benefits – in other words, paying 12.4% on the $60,000 of income would result in a lifetime payment of $128.58/month starting in retirement; or viewed another way, trying to save that $7,440 tax payment comes at a “cost” of losing $1,542.96/year for life in future Social Security payments!

On the other hand, if the individual already had enough income for AIME to fall past the first bend point – when the replacement rate is only 32% - the Social Security benefit is diminished; the same $7,440 tax payment would have only produced a Social Security benefit increase of only $45.71/month or about $548.57/year. And if income was already high enough to reach the upper bend point, that tax payment would only be producing benefits of only $21.43/month or about $257.14/year in retirement. 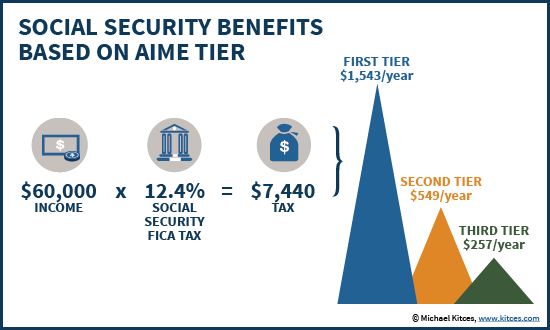 Given this dynamic, the reality is that the higher an individual’s income already is, the less harm there is in the form of foregone Social Security benefits by trying to avoid FICA taxes (assuming the tactic is otherwise legal!). For an individual who already has at least 35 years of earnings, the “benefit” of FICA taxes can even be zero, if the new year of earnings is below any of the prior 35 years of (inflation-adjusted) earnings. However, at lower benefit levels, the potential “return” on paying FICA taxes can actually be quite significant, especially for those already close to retirement (so the taxes are paid now and the benefits begin soon, which means any foregone growth on the taxes would also be minimal). And for those who may not even have their required 40 quarters of credits to get Social Security benefits at all, adding in a few more years of FICA taxes can produce a dramatic “return” by rendering that year’s FICA taxes – and all prior years – to be “eligible” for benefits in the first place!

Conversely, this also means that in some situations, it may even “pay” to shift earned income to an individual in an attempt to pay more in FICA taxes, especially if it can push that person over the 40-credit threshold, and/or if that person’s AIME is still low enough to increase benefits at the 90% replacement rate!

The bottom line, though, is simply this: while no one likes to pay any more in taxes than they have to, FICA taxes are unique in that the income on which taxes are paid is directly linked to the income used to calculate future Social Security benefits. As a result, it’s important to be cautious in the efforts taken to avoid FICA taxes, as in the long run avoiding the taxes can actually produce less long-term wealth by foregoing potentially significant Social Security benefits!