The traditional approach to risk tolerance is fairly straightforward – determine how much risk clients can tolerate, and give them a portfolio consistent with that risk tolerance level.

Unfortunately, the problem with this approach is that it can produce a portfolio disconnected from the reality of the client’s goals. Sometimes the portfolio will be more aggressive than it needs to be to achieve the goal. In other situations, a conservative client may end out with a conservative portfolio that will just doom an aggressive goal to failure.

To avoid such mismatches, then, the real key is that risk tolerance should first be applied to the goal itself, and determine whether the goal – and the portfolio necessary to achieve it – is consistent with the client’s risk tolerance. If the “goal risk” is too high, the real solution is not finding a portfolio to achieve the goal, but finding a new goal that isn’t too risky for the client to tolerate in the first place!

Although it’s often grouped together, there is an important distinction between risk tolerance, and someone’s risk capacity.

Risk tolerance is a measure of our psychological desire to engage in risky trade-offs – one’s willingness to accept the possibility of a less favorable outcome, in pursuit of a better one. Some people are willing to take many steps backwards if it gives them the potential to take even more steps forward – a classic expression of having a high tolerance for risk. With others, their risk attitudes are more conservative; they’d prefer to just take baby steps forward, to avoid the danger of ever needing to take a big step back. Accordingly, those with a higher tolerance for risk are generally willing to take on riskier investments, while those who are risk averse prefer more conservative portfolios.

By contrast, investors evaluating potential risky-or-not investments must also evaluate their risk capacity, which is a measure of their ability to actually succeed in their goals if one of those risky (i.e., bad) outcomes occurs. In other words, regardless of how they feel about risk, if “bad stuff” happened, what would happen to the actual goal, and would it still be achievable or would it become endangered?

Example 1a. John is in his early 30s and does not plan to retire for another 30 years. His ultimate goal is to generate $20,000/year of portfolio income to supplement his Social Security benefits, from a portfolio that is projected to be $2,000,000 by then (given ongoing contributions and 30 years’ worth of growth). In this context, John currently has a high capacity for risk; if there’s a severe market downturn, he still has ample time to make future contributions and allow for the market to recover before he needs to support his goal (which ultimately is just a ‘tiny’ 1% withdrawal rate anyway).

Example 1b. Contrasting the prior example, Betty is a current 63-year-old retiree who has a $1,000,000 portfolio, and needs to generate $65,000/year of distributions from the portfolio to support her retirement cash flow needs. This “6.5% withdrawal rate” is a fairly dangerous proposition, and a significant market decline could quickly turn it into a 10%+ withdrawal rate that would inevitably spiral the portfolio down to nothing. In this context, Betty has a low capacity for risk; if there’s a severe market downturn, Betty won’t be able to recover and her goals will be quickly ruined.

On the other hand, once their tolerance is considered, the irony is that it doesn’t actually matter whether John has a lot of tolerance for risk or not. A risky portfolio can achieve his goals – since even a significant market decline won’t impair a future 1% withdrawal rate – but notably a conservative portfolio can achieve his goals too, since he won’t need much return to sustain a 1% withdrawal rate either. In other words, John may have a high capacity for risk thanks to his conservative spending goal, but ironically as a result he doesn’t actually need to take any risk to achieve it!

With Betty on the other hand, the situation is more tenuous. Betty’s withdrawal rate target is so aggressive, she needs to have a fairly aggressive portfolio to have a chance of achieving the goal. If Betty has a high tolerance for risk, that may be acceptable, but if Betty has a low tolerance for risk she has another problem – the only portfolio that is consistent with her tolerance isn’t capable of actually achieving her goal!

In essence, what this means is that another way to look at “capacity for risk” is to identify the “required rate of return” needed to satisfy the goal. A high capacity for risk essentially means there is a low required rate of return – after all, in situations like John’s, you can get a low return, or even a negative one for a period of time, and still achieve the (spending) goal set forth.

On the other hand, a low capacity for risk means there is a high required rate of return – literally, the client needs to get a high rate of return, or the goal cannot be achieved. And since a higher rate of return itself will be risky, what that ultimately means is that low-risk-capacity goals are inherently risky goals. 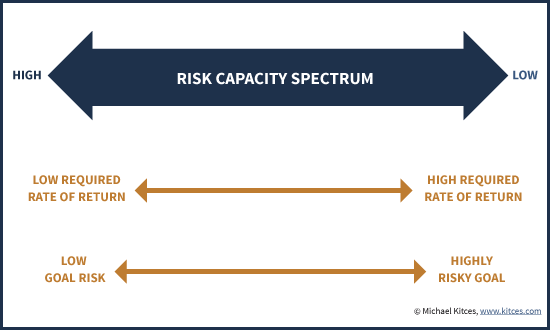 In fact, the reality is that when it comes to evaluating capacity for risk when investing a portfolio, there’s no way to evaluate that risk capacity without looking to the goals that the portfolio is meant to support. After all, if Betty’s goal was to only spend $10,000/year from her $1,000,000 portfolio, Betty would suddenly have a higher capacity for risk, as even a significant market decline would no longer be a threat. In other words, it’s not actually the size of the account balance or how it’s invested that defines capacity for risk; it’s the risk of the goal itself.

Accordingly, another way to look at risk capacity itself is to call it “goal risk” – since risk capacity is framed by the goals, and in the end some goals are just inherently more risky than others (because they necessitate investing for a riskier, higher rate of return to achieve them).

The reason that looking at goal risk is so significant is that sometimes, a client’s problem is that their goal risk is beyond their risk tolerance – or more specifically, that the required rate of return to achieve their goal would necessitate designing a portfolio that violates the client’s risk tolerance. What this means is that ultimately, you can’t design a portfolio consistent with someone’s risk tolerance until you first determine whether the goal being invested for is consistent with their tolerance in the first place! 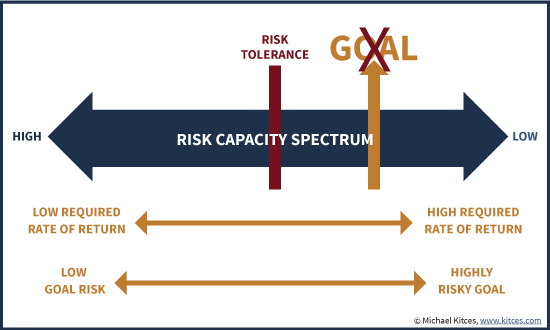 Example 2a. Continuing the earlier example with Betty, assume for a moment that Betty is a fairly conservative investor. Accordingly, the real problem that emerges is that the kind of risky portfolio required to satisfy Betty’s goal will violate Betty’s risk tolerance, so what Betty really needs to do is first have a conversation about changing her goal. If Betty’s goal is adjusted lower – for instance, she cuts the target spending rate, or decides to work longer until she has a larger portfolio so she won’t need to withdraw 6.5% - then it’s possible to design a portfolio that will meet the goal and is consistent with her risk tolerance. But again, the starting point was to recognize the mismatch between Betty’s goal and her risk tolerance.

Example 2b. Continuing the earlier example with John, assume that in John’s case, he actually has a moderate tolerance for risk. In this case, John will actually have several choices to consider. The first is simply that he can choose a slightly more aggressive portfolio – after all, even a moderate growth portfolio won’t threaten his goals, and if he wants to enjoy the upside as well (perhaps a legacy is a ‘secondary’ goal to achieve here), and moderate growth still fits his risk tolerance. A second option is to choose a conservative portfolio – after all, John doesn’t need too much of any risk to achieve his goals. Just because he can afford to take the risk and has the tolerance to take the risk doesn’t mean he should take the risk! Or alternatively, John’s third option is to actually pick a more aggressive goal that fits within his risk tolerance. For instance, John might target retiring 10 years earlier, which would simply mean a still-relatively-conservative 2% withdrawal rate, or even try to retire 15 years earlier, which might also require him to invest somewhat more aggressively as well. Though in all these cases, John is still pursuing strategies where both his goals and his portfolio fit his risk tolerance! 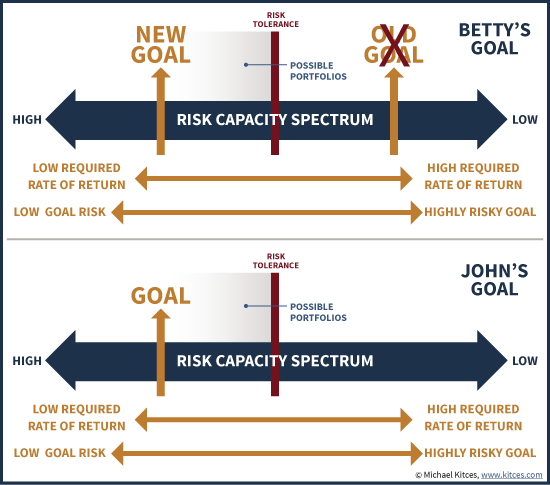 Risk Tolerance As A Constraint – To Goals First, Portfolio Second

Ultimately, the key point here is that designing portfolios in the context of client risk tolerance without first considering the risk of the underlying goals can create significant problems.

If conservative clients have unrealistically risky goals (beyond their tolerance comfort level), technically any portfolio will be wrong, because either the portfolio is too risky for their tolerance, or not return-generating enough for their goals, creating a lose-lose situation until the goal itself is modified.

On the other hand, clients with conservative goals may be able to afford to take a lot of risk – for instance, the young client with a 30-year time horizon to invest – but the fact that there is capacity for risk doesn’t mean the client should take it, either! Even if a client can afford to take risk, it doesn’t mean he/she should if there’s no tolerance for it!

Similarly, investing to a client’s tolerance for risk without first considering the goals can create issues as well. For instance, otherwise-aggressive clients that happen to have unusually conservative goals (well below their tolerance level) who get a portfolio of ‘maximum risk’ for their tolerance can introduce far more risk into the situation than is necessary. Granted, by definition the client’s risk tolerance is high enough to sustain that level of risk, but it still raises the fundamental question of why a client would get a portfolio that is riskier than what would be necessary to achieve the client’s goals, without at least adding/expanding to the goals to justify the portfolio?