Insurance functions best when it is used to cover high-cost low-probability risks – the kind that aren’t likely to occur, but would be devastating if they did. Technically, paying insurance premiums on an ongoing basis has a slightly greater expected loss than just retaining the risk, but an appealing trade-off if it means converting a potential financial disaster into a manageable ongoing premium.

On average, buying insurance is expected to be a losing proposition, financially speaking. Premiums paid (plus foregone growth) should be the less than the expected value of the average claim received from any type of insurance coverage. After all, if claims exceed premiums (plus growth) on average, it’s only a matter of time until the insurance company will just run out of money. Conversely, if the insurance company wants to make profits, the premiums plus growth must exceed the cost of overhead and claims that are paid.

Notwithstanding the fact that insurance should always come out behind, on average, for certain types of risks it still makes sense to insure. The reason is that, for potentially extreme and possibly catastrophic events, it’s better to have a small known loss than a big unknown one. For instance, imagine the choice between taking a 0.1% risk that my $300,000 house will burn down, or just paying $300/year for homeowner’s insurance. In the long run, my expected value is the same for both (at -$300/year), but the former involves a small chance of a financial catastrophe (losing all $300,000 in a single year), while the latter converts it to a “manageable” expense of just $300/year with no exposure to the extreme outcome. For serious risks, that’s a very appealing trade-off, even if most of the time I’m just going to “lose” my premiums.

A key tenet of this type of effective insurance is that the risk being insured should be of relatively low likelihood. If the probability of the risky event – and the associated claim – is high, then there is little leverage to the insurance premiums. Continuing the prior example, if I lived in a high-risk area where the probability of a catastrophic home fire was 10%, my insurance premiums might cost me $30,000 instead of $300. At that point, I could just accumulate enough to replace the property myself every 10 years! What started out as insurance ends up simply being a form of prepaying a ‘known’ future event (as if it’s high enough probability, the odds are overwhelming the risky event will happen, it’s just a matter of time). 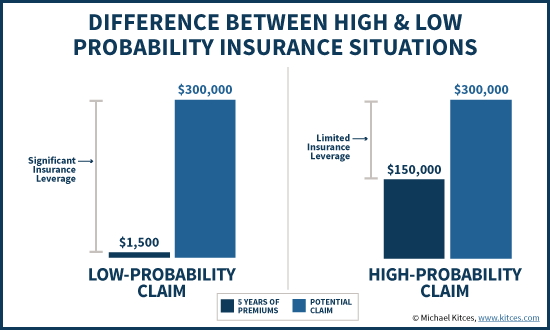 When long-term care insurance first began, it was intended as a form of coverage to protect against the high-impact but low-probability risk of needing long-term care assistance at an advanced age; one key study (Robinson, 1996) estimated the risk of needing a nursing home at 27% and 44% for men and women respectively. Yet with sustained improvements in medicine over the past several decades, life expectancy has increased, and reached the advanced age where some type of long-term care support is necessary has become increasingly likely.

In addition, not only is needing long-term care actually a relatively high-probability event, but – compared to the premiums and costs involved – it may actually be a lower impact event than previously estimated as well. Industry data from AALTCI on long-term care insurance shows that 45% of nursing home stays last 1 year or less, and 75% last no more than 3 years. The probability of a true “high-impact” event – e.g., a 5+ year nursing home stay – is only 12%. (Notably, including care in the home as well, these duration probabilities would be somewhat higher.)

In addition, while AALTCI industry data suggests an average stay of about 2.5 years, a more recent study by Hurd, Michaud, & Rohwedder (2013) suggests that in reality, the average nursing home stay is possibly as short as an average of just over a year. The researchers suggest that previous studies may have failed to recognize how often people enter facilities but then recover to the point that they leave again, which means even those with 2-3 years worth of cumulative stays may be doing it with a series of shorter long-term care events, not a single sustained claim.

For traditional insurance, the way this is accomplished is by establishing deductibles – a portion of claims that are paid out of pocket, eliminating “small” (and also more likely/frequent) claims, and ensuring that the only claims that occur are the truly large and material ones. And notably, by eliminating the high-probability low-impact events and focusing only on the big claims, the coverage actually gets much cheaper because those big claims are such low probability. Think higher deductibles on homeowner’s or automobile coverage.

So what would a more effective, “high-deductible” long-term care insurance policy look like? Imagine a policy that has a 5-10 year (or even lifetime) benefit period, but a 2-3 year elimination period to go along with it. With an elimination period that high, even the “average” stay in a nursing home will fall within the deductible period; the actual probability of ever having a material claim against the long-term care insurance claim would fall dramatically. Yet ultimately, that’s the precise point; by eliminating the “small” events and focusing on the large ones (e.g., a 5+ year claim after a 3-year deductible), the cost of coverage would fall significantly, while simultaneously doing a better job of insuring against the extreme events when they occur (as long-term care insurance has become so expensive that more than 2/3rds of all policies sold have a benefit period of just 4 years or less). In other words, instead of insuring the early years (which is expensive) and self-insuring the later years (which is also expensive), consumers could self-insure the shorter early period (with a longer elimination period) and then have (inexpensive) insurance coverage for the rest! 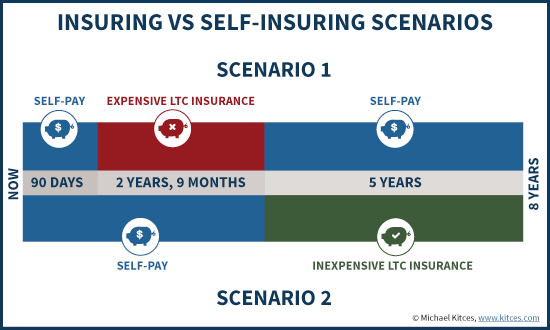 Of course, given that the whole purpose of laws limiting elimination periods was to ensure that people don’t buy coverage with a deductible period so large that they go bankrupt waiting to have a claim, policies with longer elimination periods may need to have additional financial underwriting, or some other process to help reduce the risk that people buy untenably long elimination periods. Nonetheless, if the alternative is that people don’t buy coverage at all because the short elimination period is unaffordable, any such solution may be an improvement over the current state of affairs. And the incentive for states is that by having policies with longer elimination periods but bigger (subsequent) benefit periods, there’s a potential reduction in future state Medicaid claims as more people buy coverage, an improvement from now when so many can’t afford coverage, and many who do just buy policies short enough to cover a limited period of claims while they gift away assets to qualify for Medicaid!

Notably, the reality is that most of today’s hybrid annuity- or life-insurance-based long-term care policies actually do offer a form of high-deductible policy – an indirect form of the cash-value-based claims structure, and one that isn’t subject to the existing state laws limiting elimination periods on traditional long-term care insurance. In point of fact, arguably hybrid policies may be increasing popular because they offer a form of high-deductible long-term care coverage that can’t be purchased elsewhere! However, as noted previously on this blog, hybrid long-term care policies ultimately risk being dramatically more expensive for consumers in the long run if/when/as interest rates eventually rise (which for a policy with a multi-decade holding period, is clearly likely to happen at some point) and the cost guarantee turns out to be a mirage. At a minimum, consumers should have the choice of a high-deductible traditional long-term care policy or a hybrid policy, and decide whether they wish to keep control (or not) of their cash value and how it is invested.

So what do you think? If you could recommend long-term care insurance for clients with a longer elimination period and a dramatically lower cost, would that be appealing? How much of a premium reduction would you want/need to see to be persuaded of the benefits of longer elimination periods? Do you think that state laws should be adjusted to allow consumers to at least consider long-term care insurance policies with larger deductibles?