In recent years, there has been a growing interest in both high-profile acquisitions of advisory firms, and a more general “urge to merge” as the increasing costs of running an advisory firm drive more to seek scale by banding together. Yet while the industry discussion often goes to the favorable results of the biggest mergers with the greatest success, the reality across most industries is that anywhere from 70% to 90% of mergers and acquisitions, and there’s little reason to imagine that advisory firms would be any different… suggesting that at least some of the vaunted benefits of large ensemble practices may be distorted by a significant survivorship bias.

Seeking to explore this issue further, a new industry white paper on “Best Practices in Investment Advisory Partnerships” has delved into what makes advisory firm partnerships work, and what causes them to fail… cultivated from both the experiences of the authors (who themselves were advisory firm owners who went through a problematic merger) and interviews with dozens of advisory firm partners of businesses both large and small.

What emerges from this new exploration of advisory firm partnerships is the idea that in more ways than a few, an advisory firm is like a marriage, where deep trust and a mutual commitment to the success of the relationship is crucial to navigate the inevitable conflicts that will arise over time, and that while every individual and partnership is different to some extent, the triggers of partnership problems are far more consistent than most might expect.

Best Practices In Advisory Firm Partnerships From The Partnership Resource 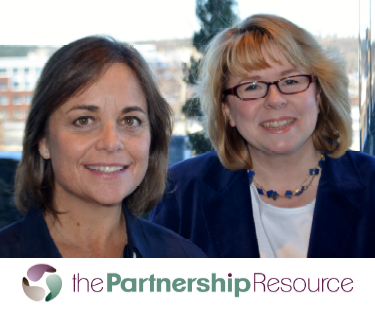 As co-founders and partners of an advisory firm that ultimately went through a problematic merger, Lisette Smith and Tanya Rapacz decided that they wanted to learn more about the dynamics of creating successful partnerships, ultimately founding a business together – The Partnership Resource. Building on their personal experiences, and an extensive series of interviews with dozens of advisors from both large partnerships and small, they have issued a new white paper entitled “Best Practices In Investment Advisory Partnerships” to share their knowledge and insights.

What Smith and Rapacz found is that the conventional wisdom of forming advisory firm partnerships – to find others you trust and respect, with whom you have a shared vision, and create a firm with a clear operating agreement – is just not enough for establishing a successful partnership. The problem is that it’s not enough to just have alignment on the big issues and trust that the details will sort themselves out in the implementation phase; even if the details do sort out, eventually the firm will find some conflict or hit a speed bump. Perhaps the partners grow in different directions over time. Maybe their alignment is not quite as clear as they thought. Or the problem could be as “simple” as disagreements about how to allocate the resources of the firm. In the long run some conflict is inevitable.

Accordingly, then, Smith and Rapacz find that the real differentiator between partnerships that succeed and fail is that – like a marriage – it takes a commitment to the partnership itself and a desire to see it succeed that drives the partners forward to find an acceptable resolution to their differences. In fact, underestimating the likelihood of conflict, and not having a decision-making or conflict resolution process ready to deal with it, appears itself to be a significant driver of partnerships dissolving.

While clearly the dynamics of every partnership will be unique to the partners involved, Smith and Rapacz also find that advisory firms tend to go through a consistent series of challenges as the number of partners grow.

While the creation of any partnership involves ceding some control, Smith and Rapacz find that two-person partnerships tend to exhibit the highest levels of satisfaction, driven in part by the fact that the partnership is still “small enough” to facilitate effective communication, and that partners with complementary skillsets tend to be effective in finding ways to carve up the duties that allows each to employ their strengths. The fact that with two partners, decisions must virtually always be unanimous by the very nature of the partnership, also helps to ensure the partners navigate and resolve any decision-making conflicts they face.

When the partnership transitions to more than two partners, though, is when the problems tend to multiple. Communication becomes exponentially more difficult as the number of partners increases, and decision-making becomes significantly more complex as there are more partner toes to be stepped upon, more people who may not buy in to a decision, and potentially more difficulty letting go of control as those previously accustomed to being involved in every key decision are compelling to let go. The situation can be especially challenging for 3-person partnerships, which run the risk of two people routinely banding together and a third regularly being the “loser” who feels left out… until eventually he/she really does leave. More generally, Smith and Rapacz find that the most unsatisfying partnerships appear to be those with 3-5 partners.

On the other hand, as partnerships cross the line towards 6+ partners, satisfaction tends to rise again, as the sheer size and number of partners involved forces the firm to better institutionalize and formalize its decision-making process. Partners have no choice but to cede more control of some areas, but it is in exchange for retaining control of other areas with a clearer delineation of roles and responsibilities. And while communication can still be challenging, ultimately the ability to trust in a centralized decision-making process can make it easier to let go. 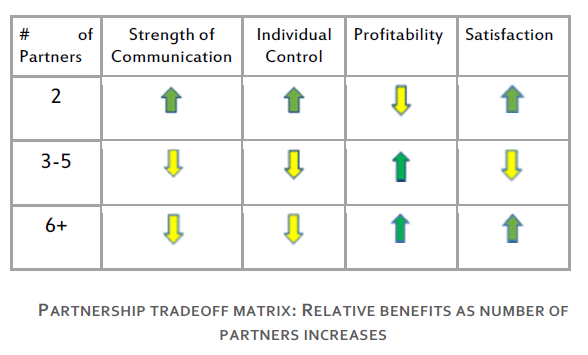 So what can partners do to minimize the risks of a partnership dissolution, either preemptively before forming the partnership, or once it is already in place?

For those considering a partnership, Smith and Rapacz strongly suggest being willing to go through a lot of potential partners to find the ones you even consider getting serious about, and once that person (or people) are identified with the right complementary skillset, the partners should really get to know each other. That includes working alongside one other (e.g., pick a substantive project to do together to get to better know each other’s work styles), spending time together socially (a broader range of interactions reduces the risk of personality ‘surprises’), and using professional assessment tools  to provide better framework for understanding each other’s perspective and approach. And be prepared up front to talk about how conflicts will be navigated when they inevitably do arise; Smith and Rapacz encourage the creation of a “partnership constitution” that picks up where the operating agreement leaves off, to further detail how the partnership will make decisions, and better define the roles and expectations of the partners.

Once already in a partnership, the white paper emphasizes how crucial it is to recognize that resolving the conflicts that arise requires a commitment to the partnership itself. For partnerships that have gotten off track – not unlike marriages – it can take time to rebuild the trust and communication again. But that’s what it takes. In other words, having conflicts is not actually a sign of a problematic partnership at all, but an unwillingness to communicate and sit down and work through them is. And whether it’s by trading off concessions, trying to find a “lowest common denominator” point of compromise, or something else, having a means to resolve disagreements is essential.

Notably, for those who find their partnership struggles to be at an impasse – or are wary of getting into such a situation in the first place – Smith and Rapacz have launched their Partnership Resource firm to offer a wide range of services to help with these exact problems, from mediation and conflict resolution for those already facing problems (or who are past the point of no return and just trying to separate as amicably as possible), to those trying to strengthen their partnership, or those considering a possible partnership and looking to “do it right” the first time. Sadly, the reality – as the white paper itself points out – is that few advisors seem inclined to use such services until after having already gotten into a problematic situation, or experienced a failed merger in the past. Nonetheless, as the pace as advisory firm mergers and acquisitions continues to rise, there won’t likely be a shortage of advisors for the Partnership Resource to work with anytime soon!

In the meantime, for those who want some deeper perspective on the challenges to navigate in effective partnerships, be certain to check out the Partnership Resource’s “Best Practices in Investment Advisory Partnerships” white paper, or if you’re facing problems that have already gone past this point, you may want to contact Smith and Rapacz directly for their services!

So what do you think? Have you ever been through a “failed” partnership, or struggle with one now? Looking back, is there anything you wish you’d done differently, or advice you might share for those in a similar situation now?