Yet at the same time, the principles of market valuation are clear: an overvalued market eventually falls in line, and like a rubber band, the worse it's stretched, the more volatile the snapback tends to be. Which means an overvalued market that goes up just generates an even more inferior return thereafter. However, greedy clients may not always be so patient; there's a risk that the planner may get fired before valuation proves the results right.

Which raises the question: is NOT reducing equity exposure in overvalued markets about managing the CLIENT'S risk, or the PLANNER'S?

The inspiration for today's blog post comes from a series of conversations I've been having with various planners about tactical asset allocation over the past year, and the all-too-common refrain I hear about how it's "so risky" to reduce a client's equity exposure, despite the clear evidence that long-term valuation impacts long-term returns. And it's not just evidence that has arisen after the fact; Shiller's Irrational Exuberance came out in 2000, Easterling's Unexpected Returns: Understanding Secular Stock Market Cycles was out in 2005, and the Journal of Financial Planning has had several articles about the implications of a coming/ongoing decade of reduced returns, including an article by yours truly in early 2006. In fact, Shiller drew his "Irrational Exuberance" title from a speech that Alan Greenspan delivered all the way back in 1996, which implied that markets might be in a state of irrational exuberance even then.

And it's not hard to see why. The graph below shows the P/E10 ratio (calculating P/E using a current price, and an average of the preceding 40 quarters {10 years} of real earnings) of the markets by late 1996 when Greenspan delivered his speech. The results are striking; the markets were as overvalued at a P/E10 ratio of nearly 28 as they had been at any time in history, except for a brief spike above those levels in the summer and fall of 1929... and we all know the consequences that occurred thereafter. 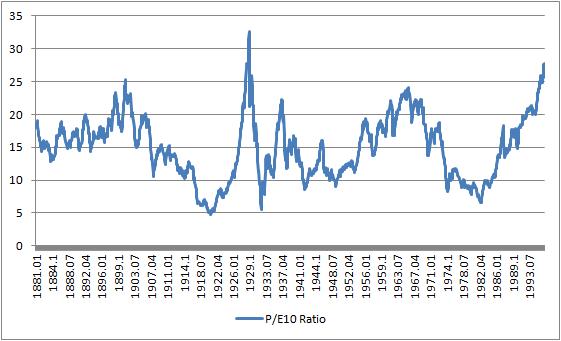 So what would have happened if you took the advice valuation was implying, and took your client's 50/50 balanced portfolio out of the stock market at the end of 1996 in response to the dizzying valuation levels and Greenspan's speech? The results are shown below, which reveal the cumulative value of a $1,000,000 client portfolio that either exited the markets completely and invested 100% into the Barclays (then Lehman) Aggregate Bond Index, versus the client who "stayed the course" in a 50/50 portfolio (which furthermore was annually rebalanced). 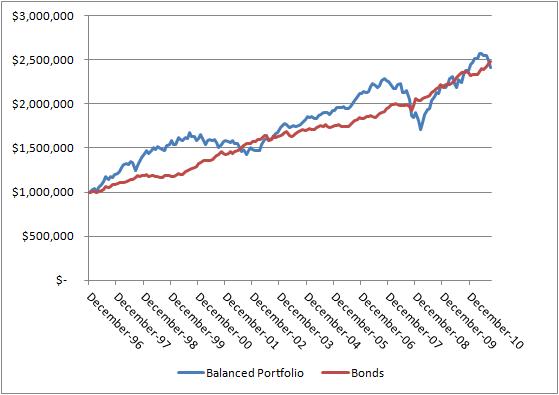 The volatile results are stunning. On a cumulative return basis, the balanced portfolio leapt ahead for the first few years, as the extreme market valuation at the end of 1996 only got more extreme by the end of 1997, more so after 1998, and even more so after 1999, until the bear market began in 2000. But by the bottom of the bear market in 2002, the balanced portfolio was behind... although a year or two later it was ahead again... only to fall once more in the global financial crisis in 2008, rise again with the sharp recovery since early 2009, and then dig below again as the market pulled back this summer (chart through the end of Q3 2011). On a cumulative basis for the just-shy-of-15-years period, the balanced portfolio delivered an average annual return of 6.17%; the all-bond portfolio did 6.35%. Notably, though, the latter achieved the slightly superior result with radically less risk; the all-bond portfolio had a standard deviation of only 3.59%, compared to the balanced portfolio's 8.20%. And for the record, the S&P 500 on its own had an average annual compound growth rate of 4.75% over this time period, with a standard deviation of 16.51%; so much for stocks overperforming bonds over the long run, and delivering an equity risk premium!

So on a total return basis, the balanced portfolio barely earned returns comparable to the all-bond portfolio, and got there with twice the volatility along the way. As expected (based on starting valuation), the stocks were a drag on the total return over the time horizon (with quadruple the volatility of the bonds), even after the market timing of the rebalancing trades added a little over 50 basis points of return. And it's even worse when examined on a fully risk-adjusted basis; in late 1996, the 15-year risk-free rate (a 15-year U.S. government bond) was yielding over 6.50%, higher than the return of the S&P 500, the Barclays aggregate bond index, or the 50/50 (re-)balanced portfolio, which means the Sharpe ratio is negative for all three portfolio options!

So if the planner was truly investing for the client's long-term financial success, the clear valuation metrics indicate it would have been a good idea to get out of the way of the markets by late 1996 when Greenspan suggested there might be some irrational exuberance out there, and it turns out the advice was accurate and true. If the planner and client didn't get out of the markets in late 1996, the signals were only stronger (and the subsequent returns even more inferior) for every year waited, reinforcing the ramifications of valuation.

So far, so good. There's just one problem: the planner who executed this evidence-based, data-driven, non-subjective, client-centric investment strategy would probably be out of business today. Let's look at how it would have gone in real time:

- 1998 goes by. The bond portfolio is up another 8.7%, but equities are up another 28.6% and the balanced portfolio would have been up 18.6%. Another 20% of your greedier clients leave; you're starting to sound nuts about this valuation thing.

- 1999 goes by. Greenspan started raising rates and spooked the bond markets; the aggregate bond index is DOWN almost 1%, while the S&P 500 is up another 21% and the balanced portfolio is up over 10%. Another 25% of your clients leave; you just don't understand the new economy.

- 2000 arrives, and the bear market begins. Your bond portfolio rallies over 11% that year, and over 30% through the end of 2002, while equities fall near 40% and even your balanced portfolio loses money. You are vindicated... at least in the eyes of the 50% of your clients who have stayed. You pick up a few new clients who think you "called it" (not realizing you had been defensive for years).

- With the bear market over, the market rallies hard in 2003, rising 28.7%, which your bond portfolio is up only 4.1% in the face of ultra low yields. It doesn't get much better over the next few years, as Greenspan raises rates through 2005 and 2006, increasing yields but taking a bite out of your returns due to the associated price declines in your bond prices. By the end of 2007, no one remembers the bullet you dodge in 2000-2002; they just see that equity markets are up over 80% while the bond portfolio is up 24%. Lots of clients are leaving again. You got it right once, but now you're out of touch!

- As markets have been overvalued all along, your perseverance pays off again; the global financial crisis hits, and the S&P 500 is off 37% in the calendar year, dragging the balanced portfolio down almost 16%, while your bond portfolio is up 5.2% on the back of dramatic rate cuts. Score another one for valuation.

- Unfortunately, the sharp decline is followed by a sharp recovery. Two years later, by the end of 2010, the markets have bounced 45% from December 31, 2008, while the bond portfolio has merely chugged out a 12.8% cumulative return for two years. Clients are doubting (i.e., leaving) again.

- A pullback in the summer of 2011 raises the specter of success again; through Q3 of 2011, the S&P 500 declines 8.7%, dragging the balanced portfolio negative, while the aggregate bond index is up 6.6%. Maybe valuation still matters, but clients are still skeptical.

The above story is a daunting picture, and highlights the true risk of being tactical: it's not the client's welfare that is on the line, but the planner's! Clients' (and all investors') memories are short; in the strong bullish years, some leave for greed and better returns, and while the successes in the bear years help, a lot, clients forget about the successes after another string of bull market returns and start leaving again. Whether you're selling investments for a commission, managing assets on a fee basis, or just giving clients hourly advice, the business hazard is the same: clients who feel your advice isn't getting them to their goals in the short term may leave before you are proven right in the long term, even though your long-term advice for their long-term planning need really WAS factually accurate and correct! In theory, the only time you wouldn't honor the advice is when you, as the planner, are trying to time good short-term performance, even if it ignores the long-term ramifications of taking investment risk when you shouldn't!

So here's a little thought experiment: If you could time travel from today back to the end of 1996, knowing 100% of what the future really would hold, and were presented with a one-time decision to irrevocably keep your clients invested in a rebalanced 50/50 portfolio, or to take clients all to bonds, which would you do? Which would be the advice that delivers genuinely superior absolute and risk-adjusted returns for your clients? Which would be the better advice for your viability of your business? What do you do when the answer for the client is different than the answer for your business? And when we say it would have been "risky" to not be in stocks for the past 15 years, whose risk are we really talking about?