While the safe withdrawal rate research provides useful guidance to understand how much clients can safely spend as a baseline, it is based on historical index returns - even though in reality, clients cannot even invest directly in an index without incurring some investment costs, and many pay for the cost of a financial advisor in addition. As a result, many planners recommend that clients adjust their spending downwards to account for the costs and fees.

Yet the reality of the research is that while investment expenses do have a real cost, it has far less of a spending impact than most assume; a 1% expense ratio might reduce a 4% withdrawal rate not to 3%, but instead to 3.6%. This surprising result occurs because of the self-mitigating impact of investment expenses that are recalculated based on the client's account; when accounts are declining, the fees decline as well, while inflation-adjusted spending rises.

The end result is that while financial planners should not ignore the impact of expenses on sustainable spending, it's important not to overstate the impact, either, or clients may unnecessarily constrain their spending when they could be safely enjoying more of their money!

The inspiration for today's blog post was a recent question I had while presenting on the topic of "Expanding the Framework of Safe Withdrawal Rates" at the FPA NorCal conference several weeks ago. While discussing some of the history of the so-called "4% rule" and where it came from, an audience member asked if the safe withdrawal rate should really be 3%, given how increasingly common it is for wealth management firms to charge a 1% assets-under-management fee. "Not at all," I replied, "in fact, the adjustment to safe withdrawal rates for investment costs is barely more than 1/3rd of the 1% you charge!"

Over the past decade, several studies have examined the impact of investment expenses on safe withdrawal rates, given that the original research on the 4% rule did assume the investor earns index returns - unadjusted adjusted for expenses.

This puzzle - how a $10,000 fee doesn't reduce sustainable spending by $10,000 - is answered by looking at how investment costs impact safe withdrawal rates not just in the initial year, but over time. For instance, the chart below shows how a client's portfolio, withdrawals, and investment costs would have varied across a 30-year retirement that started in 1966 (one of the worst retirement years in history). 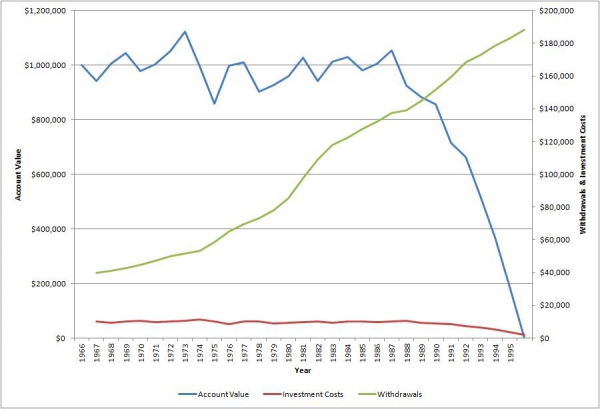 The blue line is the account value (scaled to the left axis), which starts at $1,000,000, and due to the ongoing withdrawals and difficult investment environment, struggles to ever materially grow, eventually spending down rapidly in the final years. The green line (scaled to the right axis) represents the amount of the client's spending withdrawals (not including the fee itself), starting at $40,000 (a 4% initial withdrawal rate on the $1,000,000 starting account balance), and rises each year for inflation, rising to a final year withdrawal of over $188,000 just to maintain the same real level of spending after the cumulative impact of inflation (especially harsh through the 1970s).

The red line is the client's investment fee, 1% of the account balance (blue line). In light of the fact that the blue line struggles to grow - since this is a particularly unfavorable investment/spending scenario - the red line too struggles to grow, remaining relatively flat for the first 22 years, before finally tumbling in the last 8 years (along with the account value).

Implications for Clients Of Adjusting SWR For Advisor Fees

In terms of setting an appropriate spending policy for clients, the implications of the expense research are that expenses absolutely do matter, but that it's an overstatement to suggest that spending needs to be reduced by the total amount of investment costs. Instead, what the research shows is that the best policy is to simply let the portfolio pay its own costs and fees, and adjust the safe withdrawal rate downwards proportionate to the fee - which then sets the client's spending level. Thus, for example, if the investment fee is 1%, the safe withdrawal rate might be reduced to 3.6% from 4%, and from that point forward the portfolio will pay its 1% fee ($10,000 in year 1, adjusting each year based on the account balance), and the withdrawals will be $36,000/year, adjusting for inflation. Of course, if the fee is 2%, the safe withdrawal rate adjustment would be 0.8%; any particular client's safe withdrawal rate adjustment can be adapted to their own individual level of investment costs.

Of course, in reality this is just one of many factors that can be used to adjust safe withdrawal rates; we've previously noted on this blog how to adjust the safe withdrawal rate based on the client's time horizon as well for those who will have a retirement time horizon much shorter or longer than the standard 30-year assumption. Other factors, as discussed in depth in the recent March 2012 issue of The Kitces Report, include taxes, diversification, spending flexibility, risk tolerance, the valuation environment, and more - all of which can be incorporated to customize the safe withdrawal rate for a specific client scenario.

But the bottom line is that, at least from the perspective of investment costs, it's important to remember that the impact at the beginning is not the same as the impact for life. The good news about investment costs like expense ratios and assets-under-management fees is that, because they continuously recalculate on the current account balance, become self-mitigating by declining in spend-down situations and only rising in favorable return environments... where the clients can afford the fees anyway.

So what do you think? Do you make adjustments to the safe withdrawal rate for investment costs? Have you been adjusting too little? Too much? What other factors do you look at when adjusting spending recommendations for clients?

(Editor's Note: This article was featured in the Carnival of Retirement - 25th Edition on I Am 1 Percent.)