The sustainability of retirement cash flows from a portfolio depends in no small part on the returns generated by that portfolio – in particular, the real returns, given the pernicious impact of inflation over a multi-decade retirement.

In today’s high-valuation environment, many retirement projections are being done with reduced long-term return assumptions… with the caveat that while many advisors agree on the need to project lower returns, there is little agreement on how much lower it should be.

A look at the available market data suggests that realistically, it would be appropriate to reduce equity return assumptions by about 100bps (or 1 percentage point) over the next 30 years, to reflect the current valuation environment. Ironically, the reduction is not greater, because 30 years is such a long time that even if returns are bad for a period of time, there are enough subsequent years to recover as well.

In point of fact, though, it turns out that market valuation is even more predictive of 15-year returns, and that today’s high P/E ratios imply that between now and 2030, market returns could be reduced by as much as 400bps. On the other hand, because market valuations (and the associated returns) tend to move in cycles, this also implies that in the 2030s and 2040s, market returns could be as much as 400bps above the long-term average as well.

Ultimately, then, the ideal way to adjust return assumptions in a retirement plan in today’s environment may not be to reduce long-term returns at all, but instead to do projections with a “regime-based” approach to return assumptions. This would entail projecting a period of much lower returns, followed by a subsequent period of higher returns, in a manner that more accurately reflects the impact of market valuation on returns – and better accounts for the sequence-of-return risk along the way as well!

As Benjamin Graham famously said, “in the short run, the market is a voting machine but in the long run, it is a weighing machine.” The fundamental point that the father of value investing was trying to make: while in the short term market prices generally move based on the market psychology of what’s popular (and not necessarily based on what the investment is “really” worth), in the long run markets eventually weigh an investment based on its underlying value. 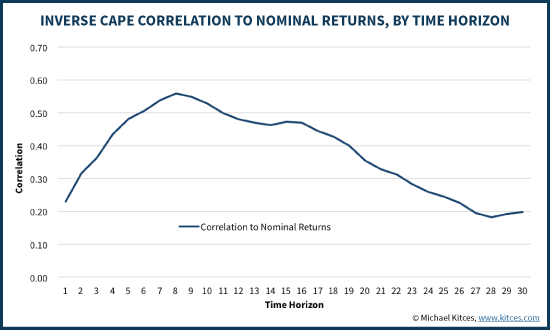 Of course, the caveat to the chart above is that in the end, it’s not just about nominal investment returns to fuel long-term retirement spending, but real investment returns. After all, if the whole point of having equities for growth in the portfolio is to allow the portfolio to maintain spending power, it’s necessary for the equities to actually generate a favorable real rate of return. As the chart reveals, there is a correlation of almost 0.50 between the Shiller P/E ratio at the beginning of a time period, and the 30-year average annual real compound return that follows from the initial market valuation starting point.

In addition, the data reveals that the predictive relationship holds up in both higher valuation environments, and lower ones. For instance, the chart below shows the 30-year average annual compound growth rates for every starting year going back to 1871; time periods with starting valuations in the top 20% (a Shiller CAPE above 22) are colored red, while those with starting valuations in the bottom 20% (Shiller CAPE below 12) are green, and the rest (somewhere in the “muddled middle” 60%) are blue. Overall, the average 30-year real return is 6.3%, but while there is some variance of returns from high and low starting valuations, overall as expected the average of the high valuation zones is only 5.5%, while the lower valuation zones produced a 7.5% average return. Valuation influences returns, but the 30-year reduction is only 100bps even at high valuations.

One important caveat to using market valuation to project 30-year return expectations is that, as noted earlier, while there is a significant correlation between Shiller CAPE and subsequent market returns, the peak correlation is actually after the first 15 years, and falls thereafter.

Over that first 15-year period, though, valuation is even more predictive of returns. For instance, the chart below shows the rolling 15-year real returns on equities, again segmented by whether the starting valuation was high, low, or in the middle. While over 30 years, market valuation suggests that the long-term return should only be changed about 100bps above or below the overall average, on a 15-year basis low-valuation environments have an average real return of 10.4% while high-valuation environments average only 1.9%! 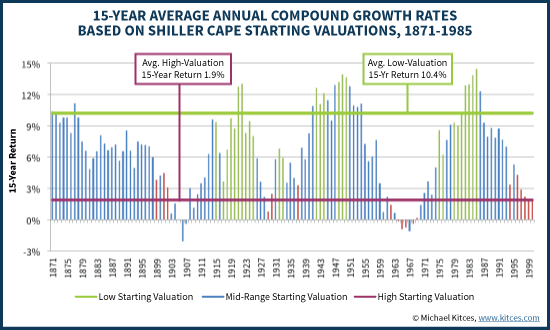 And the fact that market valuation predicts 15-year market cycles so effectively is especially important given that, for retirees, the sequence of returns early in retirement has a significant impact on the long-term sustainability of the retirement withdrawals. After all, the safe withdrawal rate is actually far more correlated to 15-year real returns that it is to 30-year real returns! The significance of this dynamic is that it actually illustrates a significant “gap” in today’s retirement planning software. What the data suggests in a high-valuation environment today is that a “good” solution would be to reduce the long-term equity return by 100bps, but a “better” solution would be to illustrate 15 years of significantly below average real returns (e.g. reduced by 400bps), followed by 15 years of significantly above average real returns (increased by 400bps above the average!). In other words, the optimal way to adjust retirement projections for extreme levels of high market valuation is not to reduce long-term returns by a little, but to reduce “intermediate” term returns by a lot for the current low-return “regime”, followed by a subsequent period of significantly higher returns (as the first 15 years of low returns amidst any level of ongoing economic growth eventually results in a low return environment). Doing so is superior because it more properly matches the true risk of high-valuation environments: exacerbated exposure to sequence of return risk, as valuation extremes trigger an especially high likelihood of a bad decade of returns, which is especially problematic for retirees sensitive to the first decade’s worth of returns!

Sadly, though, today’s financial planning software packages are incapable of modeling regime-based retirement projections – not because it’s impossible, or even difficult, to program, but simply because it’s not be programmed to do so. Hopefully that will change soon!

So what do you think? What equity return assumptions are you using for retirement projections? Are you reducing returns in today's environment? If so, by how much? Please share in the comments below!