Financial planners seem to increasingly agree we may be in a "new normal" - an environment where returns are lower, due to a combination of high market valuation, low interest rates, debt deleveraging, and the associated lower economic growth. Accordingly, it has become increasingly popular to reduce long-term return projections for clients from their historical standards. Yet the reality is that while returns may be reduced for the next decade, it doesn't necessarily mean clients will experience low returns for the entirety of their multi-decade retirement, just as those who retired in prior low-return environments like the 1970s may have had a bad decade of returns but an average or even above-average 30-year result. A better alternative may be to model retirement as a sequence of "investment regimes" - extended periods of time that have specific risk and return expectations, followed by subsequent periods of time that have their own expectations. For instance, instead of reducing 30-year returns, clients might look at the impact of having an average return of 5% for the first half of their return, and 15% for the second half, reflecting the market cycles seen throughout history. Could this actually represent a better way to project the risks and opportunities of retirement and develop appropriate spending recommendations?

"Is that really accurate over the next 30+ years, though?" I replied. "I realize the next 10-15 years may be bad, but really bad return environments are normally followed by good ones. Isn't there a risk you're being unduly harsh about the client's truly long-term return by lowering the whole 30 years?"

"I don't know what else to do," he answered. "And it just seems too unrealistic to use long-term average returns in today's investment world."

As discussed recently, markets go through long-term "secular" cycles - extended periods of time of below- or above-average returns as market valuations expand and contract. Over the past century, these market cycles have led to a substantial long-term return for equities, although the reality is that virtually all of the cumulative gains of the markets were made in only about half the years, spanning four secular bull market cycles of expanding multiples. The rest of the time, the market was declining or just treading water, often for 10-20 years at a time, as shown in the chart below from Crestmont Research. 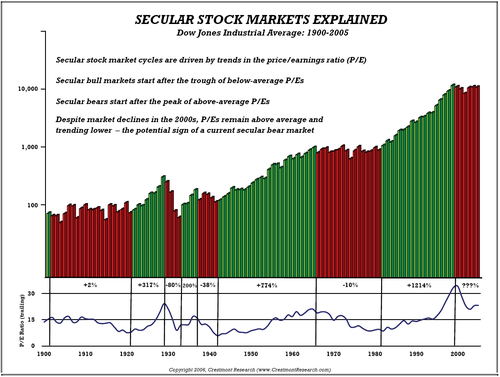 Notably, for someone living in the midst of a red zone, like the 1970s, the reality is that the long term return for the client can still be quite positive. For instance, the average annual compound growth rate of the S&P 500 from 1969 to 1999 on a total return basis was over 13% per year (even though the long-term average is closer to "only" 10%!)! However, that's only because it was barely above 0% for the first decade, and then hugely positive over the last two decades, as the secular bull market (the green zone) kicked in, delivering extraordinary equity returns for the 1980s and 1990s (to make up for the dismal returns of the 1970s and late 1960s).

The reason this matter is that, as the chart shows, today's retirees are living in the midst of another red zone - implying that returns may be poor for the coming decade, but not necessarily indicating that returns will be bad for the next thirty years; in fact, as the preceding example pointed out, it's actually possible that those retiring in the midst of a red zone could still have an above average long-term return, despite having an anticipated bad start.

Another way to look at secular bull and bear market cycles is to characterize them as different investment "regimes" that are characterized by their own expected returns and expected volatility (as the building blocks for portfolio design), which remain stable within that environment/regime until markets transition to a new regime (e.g., transition from a red zone to a green zone, or vice versa).

We demonstrated a version of this regime characterization in our Journal of Financial Planning article last year, "Improving Risk-Adjusted Returns Using Market-Valuation-Based Tactical Asset Allocation Strategies" where we showed the expected return and/or volatility were statistically significantly different depending on the market's starting valuation (and per Crestmont's research, starting valuation levels is the primary defining characteristic of the red versus green secular market cycles). The chart below, reproduced from the aforementioned article, shows the average return and volatility over the subsequent 5 years (the numbers shaded in green were statistically significant compared to the average).

Given the reality that return (and volatility) expectations vary by market regime/valuation environment, the ideal way of projecting retirement should be showing how the client's retirement goes in light of the starting regime and how it may change over time.

For instance, using the chart above, if the client was knowingly retiring in a high-valuation environment, it might be most appropriate to show a reduced average return for the next 5 years, then a period of average returns as market valuation normalized, and then ultimately a period of high returns at some further point down the road as market valuation ultimately hits the bottom 10% of P/E ratios. Ultimately, the long-term average might come out to be similar to what the 30-year average of the markets would have been anyway; but by showing the lower return / moderate return / higher return market sequence, the projection would better reflect the true sequencing risk of the client's retirement.

An even simpler way to adapt might be to further expand the next generation of Monte Carlo analysis by running a projection where the first half, when valuations are high, has an average return of 5% (representing secular bear market red zones) and the second half, when valuations are low, has an average return of 15%; the returns would then vary given a standard deviation of 20% (or perhaps varying standard deviations for the two valuation regimes). The end result, again, would be an a long-term plan that may still lead to long-term average returns, but do so with a return sequence that is more representative of the retirement risks the client faces.

Some research remains to determine exactly what the parameters of the regimes should be, and different planners will likely have their own opinions (just as different planners have varying views about what long-term return and volatility expectations to use in the first place). Nonetheless, the fundamental point is that illustrating a sequence of low-return/high-return regimes - that may average out to an appropriate long-term care, but accounting for the sequencing risk - may represent a far more accurate way to project the risk of a client's retirement plan, rather than arbitrarily reducing the 30+ year returns, which may over-estimate the reduction in long-term returns, under-estimate the reduction in short-term returns, and fail to accurately model the sequencing risk.

So what do you think? If there was a tool that allowed for regime-based retirement projections, would you use it? What kinds of return assumptions would you use if you could break retirement into 10-15 year segments and assign risk/return expectations to each, rather than only changing the whole return projection? Would this be a helpful tool for communicating the issues and concerns with clients? Is it more accurate to project the "new normal" of low returns followed by a "new new normal" of the above-average returns that will likely follow?