Safe withdrawal rates have been under a great deal of criticism in recent years, as both investors and planners ratchet downwards their expectations of market returns in the face of a low return environment. Of course, the reality is that safe withdrawal rates are actually based upon low-return environments in the first place, and do not rely upon long-term historical average returns. Nonetheless, a growing body of research suggests that expectations of the safe withdrawal rate should be adjusted based on the current market conditions that apply at the time of retirement.

Accordingly, today's low-yield environment, where the real return on TIPS is actually negative in the coming years, arguably represents one of those times where safe withdrawal rates should be applied with caution. And in fact, a recent draft study by Finke, Pfau, and Blanchett affirms this concern, finding that the probability of failure for today's retirees could be much higher than commonly recognized, given today's real returns on TIPS.

Ultimately, though, just because starting conditions are suboptimal does not guarantee that safe withdrawal rates will fail for today's retirees. By analogy, just because you're walking along the edge of a cliff does not mean you're certain to fall off of it; nonetheless, being closer to the edge of the cliff is certainly more dangerous than being safely inland, and similarly starting a retirement in today's market conditions clearly merits more caution and monitoring!

The inspiration for today's blog post was the recent release of a "draft" study on the Social Science Research Network (SSRN) by retirement researchers Michael Finke, Wade Pfau, and David Blanchett, entitled "The 4 Percent Rule is Not Safe in a Low-Yield World" which concludes that in today's low-yield environment the risk of failure for a 4% safe withdrawal rate may be upwards of 50% if rates stay this low indefinitely. Granted, most planners seem to be more concerned about rates rising in the coming years, rather than staying low, but the study notes that even if rates normalize in 5 years, the 4% safe withdrawal rate still presents a non-trivia 18% probability of failure.

In addition, the reality is that periods of poor returns do not occur entirely at random; below-average (as well as above-average) equity returns can be predicted by looking at the long-term P/E ratio of the markets at the start of the time horizon, and the secular market cycles that result can impact both the optimal investment strategy, but market valuation itself has been shown to impact the initial safe withdrawal rate.

Of course, the caveat to the above research is that it generally adjusts safe withdrawal rates based only on market valuation, even though most retirement portfolios are some diversified balance of stocks and bonds (and possibly other asset classes as well). Yet bonds, too, go through cycles of their own. In fact, for most investors, it's readily apparent that in a world where a 10-year government bond doesn't even yield 2%, it's highly unlikely that bonds will generate a return anywhere near their long-term historical average of 5% in the coming decade!

Accordingly, the goal of the Finke et. al. study was to extend some of the current research on safe withdrawal rates adjusted to current market conditions to look specifically at the challenges posed by today's low yield return environment.

The chart below shows the current real return Treasury yield curve based on TIPS rates (as of the beginning of February, 2013), compared to the long-term historical average real return for bonds (which is approximately 2.6%). As the chart makes clear, it appears exceptionally unlikely that bonds will produce real returns comparable to history anytime soon. 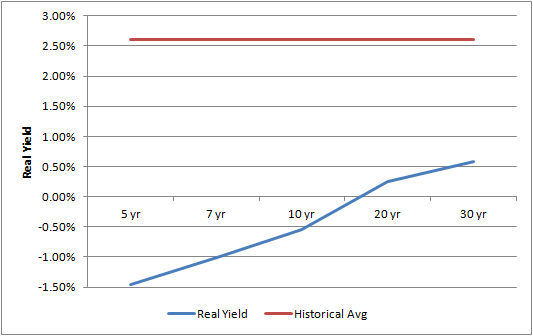 Accordingly, the Finke et. al. study simply re-ran Monte Carlo projections to determine the safe withdrawal rate assuming that returns were not randomized around a historical 2.6% real return, but around a -1.4% 5-year TIPS real return that actually exists in today's marketplace. The study still assumed that equities still provide an equity risk premium of about 6%, but notably with a -1.4% real return on bonds, the expected real return for equities would be "only" 4.6%.

Of course, assuming a -1.4% real return on bonds for all 30 years is arguably unduly harsh; after all, as the chart above shows, even the markets are projecting a real return of nearly 0.6% on a 30-year basis (which could be secured by purchasing 30-year TIPS now). Thus, while it's still notable that the TIPS curve implies that real returns will be about 2% below the long-term historical average (the difference between the 30-year TIPS real yield and the red line), that's still 2% better than a 30-year real return of -1.4%. Or viewed another way, projecting a -1.4% real return for 30 years still assumes that markets are drastically wrong about long-term real returns, and that long-term TIPS are still poised for a strong rally (which would ultimately be necessary to drive today's 30-year 0.6% TIPS rate down to a -1.4% real return over 30 years).

To adjust for this, the Finke et. al. study also projects the results of bond markets producing a -1.4% real return on bonds for "merely" 5 or 10 years, and then normalizing to the long-term average of 2.6%. Arguably, this is still a bit harsh for the 10-year scenario, as the 10-year TIPS yield is -0.55%, not -1.4%, but also gives the benefit of the doubt to the investor thereafter, assuming that real rates normalize to 2.6% for the remainder of the time period (even though the TIPS curve implies that the real return would only be about 1% for the last 25 years after -1.4%, or about 1.1% for the last 10 years after -0.55%). Notably, the study does not assume any capital losses on the bonds as interest rates rise (ostensibly implicitly assuming the whole portfolio is invested in 5-year TIPS that are held until maturity and then reinvested at the higher rates thereafter).

While the biggest headline associated with the Finke et. al. study has been the potential 57% failure rate for their baseline scenario - a Monte Carlo analysis where bonds generate a real return of -1.4% for the next 30 years - this result is arguably questionable, as it essentially relies on a forecast that the current bond market is still horribly overestimating bond returns and that TIPS are still poised for a huge rally, given that 30-year TIPS are still priced for a real return near 0.6% over 30 years, not -1.4% as the study assumes! In other words, the analysis assumes that real returns on bonds are a whopping 4% below the historical norm, sustained for 30 years, even though the bond market itself provides 30-year TIPS that are "merely" 2% below the long-term historical average for that time horizon.

By contrast, the chart below (based on available data from Shiller) shows the real returns over 30 years for the four worst case scenarios historically, which did result in a safe withdrawal rate near 4%. Notably, while some of them did witness flat or even negative real returns in bonds (the 1929 or 1937 retirees), or very substandard real returns in stocks (the 1966 retiree really did get a real return of 4.6% in equities for 30 years!), none of the scenarios produced a real return of only 2.2% on a balanced portfolio. In fact, there is a notable inverse relationship; the worst environments for stocks that had poor equity risk premia tended to still have near-average real returns in bonds, while the environments that had low real returns for bonds (similar to today) actually tended to produce above-average equity risk premiums for stocks. This is not entirely surprising, given the low bond rates tend to stimulate stocks and risky assets, while higher bond rates do the opposite (which is exactly why the Fed cuts rates to stimulate the economy and raises rates to slow it).

Notwithstanding the concerns of projecting a 5-year -1.4% TIPS rate for 30 years, it does seem entirely valid to project the 5-year TIPS rate for the next 5 years and then allow rates to revert, and from this perspective the 18% failure rate indicated in the Finke et. al. study is still notable - especially given that while most anticipate that rates and real returns will rise in the coming years (even the forward returns of the TIPS yield curve implies it), it's not necessarily clear that real rates will go all the way back to the historical average in just 5 years. To the extent that rates only partially normalize in 5 years, the 18% failure rate could actually still be too conservative. And the study also does not further trim expected real returns in equities in the coming years despite today's high valuation (at least based on Shiller P/E10 and secular market cycles), and the fact that reverting to higher real returns with rising rates is often bearish for both bonds and equities.

Ultimately, the conclusions of the study - especially an 18% (or greater?) risk of failure for current 5-year TIPS real returns followed by a reversion to the long-term average - do not imply "certain doom" for today's retirees, but nonetheless the study does illustrate the reality that today's retirees will need to be actively monitored to ensure that their plans are not falling off a cliff. Strictly speaking, even with the assumed real returns of 2.2% on a balanced 60/40 portfolio for 30 years, it is possible for a 4% withdrawal rate to work (just amortizing a 2.2% real return for 30 years supports a 4.5% withdrawal rate). Nonetheless, as the graphic below reminds us, when the retiree is walking near the edge of the cliff (the version on the right), there's more danger than when the retiree is walking safely inland. But just because you're living the scenario on the right doesn't mean you are going off the cliff; just that you need to be more cautious!