Many readers of this blog contact me directly with questions and comments. While often the responses are very specific to a particular circumstance, occasionally the subject matter is general enough that it might be of interest to others as well. Accordingly, I will occasionally post a new "MailBag" article, presenting the question or comment (on a strictly anonymous basis!) and my response, in the hopes that the discussion may be useful food for thought.

In this week's MailBag, we look at a recent inquiry regarding whether it's still a good deal to donate appreciated securities to a charity, now that the rules are back allowing Qualified Charitable Distributions (QCDs) directly from an IRA to a charity.

Question/Comment: With the new rules allowing you to donate money from an IRA to a charity, is it ever appropriate to donate stock anymore? Wouldn't not paying up to 39.6% on an IRA distribution be better than not paying 20% on capital gains given the new rates for 2013?

In terms of tax benefits, it is true that with the return of Qualified Charitable Distributions (QCDs) in 2013, it is a better deal to donate from an IRA than to just donate cash. Nonetheless, it's actually still inferior to donating appreciated securities.

An example may help to illustrate:

Client has $100,000 in three accounts: a checking account, an IRA, and some zero-basis securities. Assume a 20% tax rate on capital gains, 40% on ordinary income (makes the math easier, although technically a high income client would also face a 3.8% Medicare surtax as well). With respect to these three accounts, the client has a total net worth of $300,000, although some of it is pre-tax and some of it is after-tax.

- Scenario 1. If the client writes a check, that account is gone. The $100,000 donation by check gives a $100,000 charitable deduction, so if the client were to withdraw the IRA to spend it, the two would offset each other. In practice, the offset is never quite perfect; the income increases AGI and may impact certain phaseouts and credits, while the deduction may not be fully utilized in a single year and may have to be carried forward to a subsequent year. To account for the fact that the deduction may not perfectly offset the income, we can assume that the client ends out being able to spend about $98,000 of the IRA, losing the last $2,000 to the "tax slippage" of income and deductions. In the meantime, the client still has $100,000 of appreciated securities, which are worth $80,000 on an after-tax basis. The net result of this donation: the client's true after-tax net wealth remaining is $98,000 + $80,000 = $178,000 after doing a $100,000 donation. 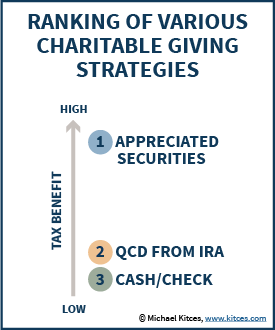 Not surprisingly, Scenario 1 - with no donation of appreciated securities, nor using the QCD rules - is the worst. Notably, this is also the result that would occur if the QCD rules didn't exist and someone just tried to do a direct distribution from an IRA to a charity anyway (taxed as a normal distribution from the IRA, mostly-but-not-fully offset by a charitable contribution of the proceeds).

On the other hand, as the examples illustrate, Scenario 2 (using QCDs) is an improvement but it's ultimately Scenario 3 that wins by a healthy margin. In fact, the difference is attributable almost entirely to the capital gains taxes that were permanently avoided with the donation of appreciated securities, which applies in addition to the fact that there's a charitable deduction for the full fair market value of the stock. Certainly, the greatest caveat here is that the client needs to be able to use the charitable deduction over some reasonable time period; if donations are too high relative to income, the charitable deduction carryforward is lost after 5 years, and if deductions are too low and the client can't itemize the value is lost in the first place. And of course, in some cases the state tax treatment of charitable deductions can impact the outcome. But in the overwhelming majority of scenarios, the appreciated securities are the best outcome, and the results improve as either the capital gains tax rate or the magnitude of the capital gain increases.

It's also worth noting that donating appreciated securities also has greater flexibility, as they can be used to fund split-interest trusts (e.g., a Charitable Remainder Trust {CRT} or Charitable Lead Trust {CLT}), private foundations, or donor-advised funds, while QCDs can only be done to public charities.