On January 30th, the Department of Housing and Urban Development (HUD) issued Mortgagee Letter 2013-01, which announced that beginning April 1, 2013, reverse mortgage borrowers will no longer be able to obtain a fixed rate on HECM Standard reverse mortgages; instead, only the HECM Saver loans, with smaller loan limits, will be available with a fixed rate option. Those who wish to borrow a lump sum using a HECM Standard reverse mortgage in the future will be required to select an adjustable rate structure, just as they must do now under either the monthly income or line-of-credit payment options.

While the change is significant to the reverse mortgage industry, given that a large and rising percentage of reverse mortgages in recent years have been established under the fixed-rate structure, from the planning perspective the impact is likely to be more limited, as many planners have only recently begun to consider reverse mortgages for clients when the less expensive HECM Saver loan became available (and which can still be done with a fixed-rate structure). In addition, many reverse mortgage strategies - including some highlighted in recent years in the Journal of Financial Planning and The Kitces Report - are based upon the monthly income or line-of-credit payment options, which require an adjustable interest rate loan structure anyway.

Perhaps the greatest irony of the HUD change, though, is its reported reasoning: a rise in defaults by fixed-rate borrowers who extracted the maximum equity from their home, found it wasn't enough, and subsequently began to fail making their property tax and homeowner's insurance payments, triggering a reverse mortgage default. In other words, HUD is finding that it's very problematic when consumers use reverse mortgages as an income-of-last-resort solution, instead of engaging in the reverse mortgage earlier as an income source coordinated as a part of the individual's overall financial plan - guidance that would perhaps be more useful to both consumers, and financial planners too!

The reverse mortgage changes announced in HUD's Mortgagee Letter 2013-01 came rather suddenly; although the guidance was just released on January 30th, the effective date is April 1st, and at this point prospective borrowers only have a little more than a month to obtain a fixed-rate HECM Standard mortgage (technically, the borrower must submit an application, complete the requisite reverse-mortgage counseling program, and receive a case number by the deadline; the loan can then close as late as July 1st). Once April arrives, the HECM Standard reverse mortgage, with its various payment options (lump sum, monthly income, or line-of-credit), will only be available with an adjustable interest rate structure. Those who wish to borrow with a fixed interest rate after April 1st will be required to use the HECM Saver reverse mortgage, which fortunately has lower upfront mortgage insurance costs, but as a result offers lower loan limits. In other words, the true net effect of the change is that those who wish to borrow using the fixed rate option will simply not be able to borrow as much anymore, because the loan will be required to conform to the HECM Saver principal loan limits instead of the higher HECM Standard amounts.

Notably, the HECM fixed-rate option is only available when the borrower takes out the full amount of the intended loan (up to the maximum limits) as an upfront lump sum. Consequently, borrowers who planned to utilize the line-of-credit or lifetime-monthly-income reverse mortgage payment options have already been required to use adjustable rate loans. Nonetheless, the fixed rate structure has been increasingly common in recent years, with HUD reporting in a recent WSJ article that as many as about 70% of reverse mortgage loans are now the fixed-rate variety. However, given that the fixed-rate lump-sum reverse mortgage will still be available, the industry expects that the total number of loans won't likely be impacted; it just may be at somewhat lower borrowing amounts, given the lower loan limits available on the HECM Saver (about 10% - 15% lower than HECM Standard loan limits).

Why The Reverse Mortgage Change?

So given that fixed-rate lump sum mortgages will still be available under the HECM program (albeit under the Saver not Standard loan terms), why the change at all? 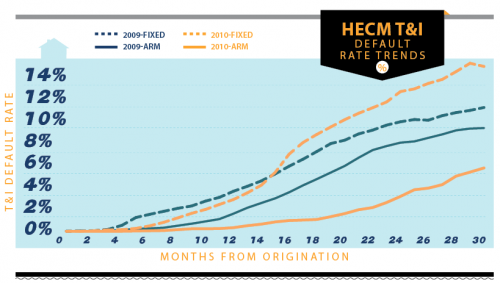 And as the graphic above shows, the default rate due to Taxes and Insurance (T&I) is significantly worse for HECM fixed-rate loans than the ARM structure. The difference is that the pool of ARM loans include many line-of-credit and monthly-income borrowers, who did not borrow the absolute maximum amount up front, and therefore are likely to have capacity to draw further funds in the future against the reverse mortgage to pay ongoing tax and insurance obligations. By contrast, not only is the fixed-rate loan entirely an upfront lump sum payment, but it generally requires the borrower to draw out the maximum loan amount; borrowers who find this option appealing may both be in more desperate financial straits, and also less likely to have other resources available. As a result, once the lump sum runs out, and there truly are no remaining resources nor any further borrowing capacity on the reverse mortgage, taxes and insurance can no longer be paid and the defaults start to rise.

In other words, consumers seem to be especially likely to use fixed-rate lump sum reverse mortgages as a loan of last resort when they're in serious financial trouble, deplete the amounts borrowed, and then proceed into default anyway. The reverse mortgage turns out to be too little, too late, or both, to solve the underlying financial situation or spending problem. And while this may potentially be true with fixed rate HECM Saver loans as well, the upshot - for HUD and the FHA at least - is that with lower loan limits, if thereis a default, at least there's a reduced risk that the loan will be underwater, better preserving the health of the Mutual Mortgage Insurance Fund that backs reverse mortgage loans.

Fitting The Reverse Mortgage Into The Financial Planning Picture

Ironically, the results that HUD is seeing on reverse mortgages imply that consumers might be better positioned if they proactively used a reverse mortgage earlier, coordinated as part of a broader income/spending plan over time, rather than waiting and relying on it as a last resort when the planning situation may be too far gone; in other words, for those who are at all exposed to the risk of spending down assets in retirement, reverse mortgages need to be part of the plan sooner, rather than later.

Although the previous studies focused on adjustable rate reverse mortgage structures, an analysis in the November 2011 issue of The Kitces Report found benefits to using a fixed-rate reverse mortgage as well, especially for those clients who already intend to hold a mortgage in retirement. To the extent that it's beneficial to hold a mortgage in retirement in the first place - for the opportunity to keep a portfolio invested for a greater return than the cost of borrowing - the strategy is even more effective when done with a reverse mortgage. After all, if the investor's goal is to maintain a certain amount of inherent leverage on his/her balance sheet by keeping a mortgage, a traditional mortgage is less efficient to do the fact that it amortizes and de-leverages itself over time; conversely, for those who are comfortable with the investment risk of the strategy, a reverse mortgage eliminates the requirement to repay and allows the retiree to maintain the mortgage for life, while keeping the portfolio invested as well.

The bottom line to all of these strategies, though, is fairly straightforward: reverse mortgages may work far better when they're done not as a last resort, but as a part of an ongoing retirement plan. And the loss of the fixed-rate HECM Standard may not necessarily be a big issue, as many of the recent research strategies assume the use of a adjustable rate line-of-credit anyway. For those who do wish to utilize lump-sum fixed-rate strategies, the good news is that the HECM Saver loan option remains available - which was often the preference of planners anyway, given the lower initial costs of the HECM Saver reverse mortgage because it avoids the upfront 2% mortgage insurance premium that exists for HECM Standard loans. However, with lower loan limits on the HECM Saver, it is perhaps more important than ever to recognize that if there's an intention to use a reverse mortgage at any point during retirement, it needs to be implemented before the available loan amount is too small to save the client's retirement plan.