Notably, though, the study also finds that while CFP certification is associated with higher income, it’s not necessarily because advisors get new clients simply by showing off their CFP marks. Instead, the positive impact derives primarily from enhanced credibility, improved technical expertise and knowledge (which also leads to better self-confidence as an advisor), and greater client satisfaction with the advisor’s (more comprehensive financial planning) services.

And given that some of the fastest-growing channels for CFP certification are now employee advisor roles at either independent RIAs or “online” brokerage/investment firms with retail advisors (i.e., Schwab, Fidelity, and TD Ameritrade, and now Vanguard), it appears that obtaining the CFP marks are increasingly becoming a key step to climbing the employee ladder as a financial advisor as well.

To say the least, though, with the potential for a 14% to 33% increase in lifetime earnings, at this point the CFP marks continue to more-than-sufficiently-justify the $3,000 - $10,000 required investment into a CFP educational program to obtain the certification!

A recent study entitled “Building A Wealth Management Practice: Measuring CFP Professionals’ Contribution” was commissioned by the CFP Board and produced by respected industry analyst Aite Group, and aimed to study the differences in business metrics between advisors and advisory teams that included CFP professionals, vs those that did not. 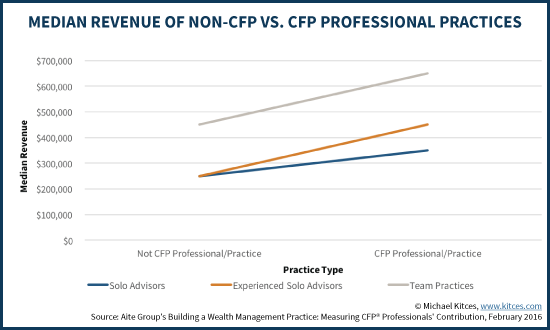 Notably, though, revenue generated by CFP professionals is not necessarily the same as their personal income. Whether it’s due to operating under a broker-dealer where only a percentage of gross dealer concession revenue is actually paid to the advisor, or in an RIA where the advisory firm owner has his/her own expenses, or even working in a large financial services firm that has its own salary-plus-bonus structure, revenue is not necessarily directly related to actual advisor compensation. Nonetheless, when surveyed about their actual personal take-home compensation, the study still found that CFP certificants enjoy a significantly higher average compensation, even after controlling for years of experience. 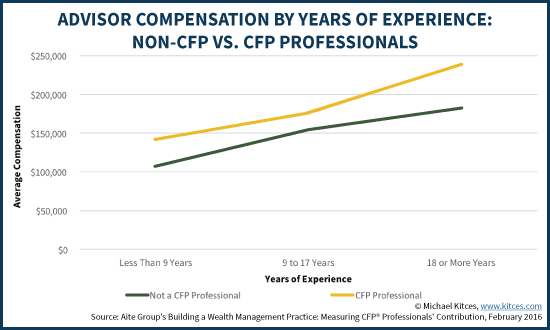 When delving deeper to determine how CFP professionals generate greater revenue and income, the researchers found that the results are driven not by CFP certificants serving significantly more clients; instead, they grow income by generating more revenue per client. And this outcome doesn’t appear to simply be a result of engaging the client more holistically (e.g., generating more revenue by providing a wider range of products and services), though CFP professional do generate revenue from a wider range of sources. Instead, it’s a result of CFP certification enabling them to work with more affluent clients in the first place; in the average CFP practice, 41% of clients are high net worth (HNW = >$1M of investable assets) or ultra high net worth (UHNW = >$10M of investable assets), compared to only 27% of HNW/UHNW clients in non-CFP practices. 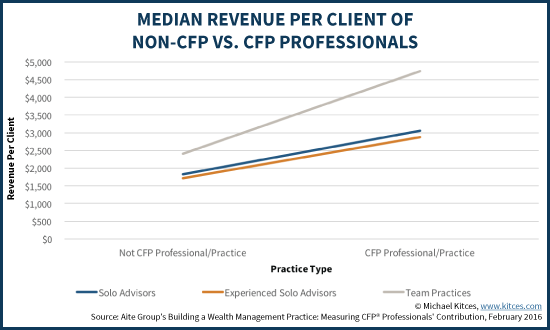 The Real Benefits Of Getting CFP Certification?

While the Aite study’s results show that CFP certificants generate more total revenue, more revenue per client, and more personal income (based on that revenue), and do so by working more often with affluent clientele, the question still arises as to how, exactly, a CFP professional achieves these results. Is it simply that affluent clients see the CFP professional has the CFP marks and volunteer to do business, or something more nuanced?

When asked about the impact that CFP certification had on their careers, the researchers did find that the number one self-reported benefit was the enhanced credibility and trustworthiness with clients by having the CFP marks. However, this was followed closely by the advisor’s self-confidence in working with clients, and the actual technical expertise and knowledge conveyed by going through a CFP educational program, along with the greater client satisfaction that resulted from those more advanced services. 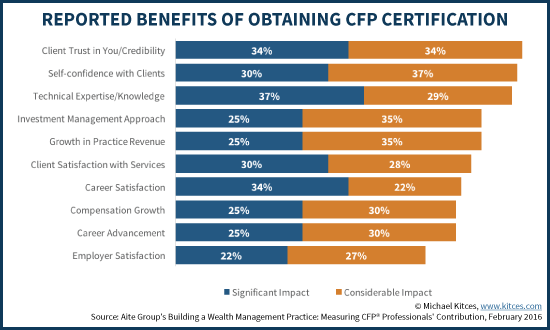 In other words, while the CFP Board’s public awareness campaign does appear to be moving the needle on the perceptions of the affluent about the CFP marks, and CFP professionals do report an improvement in credibility with clients, ultimately the benefits of CFP certification are internal as much as external – expressed in factors like the actual increase in technical competency and expertise of the advisor, and the self-confidence that comes with really knowing your craft.

Accordingly, when Aite Group examined the compensation of advisors who had obtained their CFP certification in the past 5 years, versus those who weren’t CFP professionals at all, they found that recent CFP certificants had experienced significantly more recent income growth than non-CFPs (a 33% increase vs just a 12% increase from 2009 to 2014). 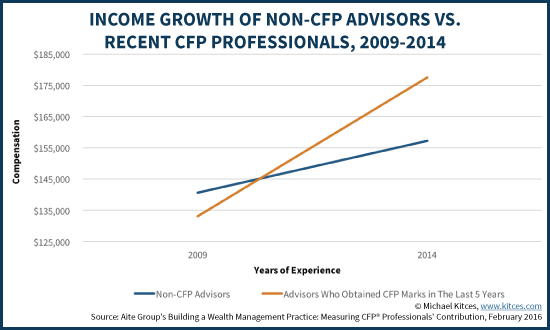 Ultimately, there is perhaps no better expression of the positive impact of CFP certification than the sheer growth in the adoption of the CFP marks themselves. 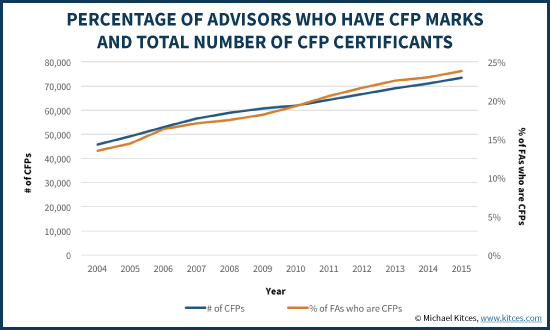 Even more notable, though, is the trends in adoption of CFP certification across various advisor channels. As the Aite Group study results reveal, the most rapid adoption of CFP certification is occurring in large online brokerage firms with retail branches (i.e., the retail divisions of Schwab, Fidelity, and TD Ameritrade), followed by the independent RIA community, and then advisors at various independent or captive broker-dealer firms. 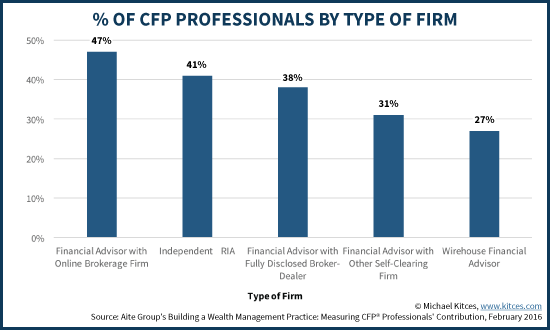 Notably, the study deliberately “oversampled” CFPs to ensure a good comparison group of CFP vs non-CFP advisors (thus why the average number of CFPs across all channels is higher than the overall 24% adoption rate of CFP certification); nonetheless, the relative trend of where CFP marks are being adopted is notable, as the highest share of CFP certificants are now found in channels most likely to operate with salary-based employee advisors rather than brokerage salespeople, suggesting that the nature of CFP certification may be shifting from a sales-oriented job to a salaried-employee-based professional career (for which earning CFP certification is a key step to advancing up the career ladder). And the study does not appear to include Vanguard’s Personal Advisor Services, which would fall into a similar category of employee advisors, and is a rapidly growing segment of CFP certificants (given Vanguard’s immense size and scale).

Regardless of the channel, though, the Aite Group’s study shows that CFP certification appears to be associated with significantly higher advisor income – upwards of 30% higher compensation – both in the short term after earning the CFP marks, and in the long run. And the trend appears to be holding even as the adoption of CFP certification grows, and shifts from a sales-oriented job to a more common employee advisor role. Which suggests that going through a CFP educational program, which may cost anywhere from $3,000 to nearly $10,000, still provides an incredible return on self-investment!

So what do you think? What was the impact of earning CFP certification on your career trajectory? Or are you still trying to decide whether it's worthwhile to pursue the CFP marks? Please share your thoughts or questions in the comments below!