The past 5 years have been difficult for most firms, as the financial crisis has wreaked its havoc on the economy and consumers, and we enter a "New Normal" environment where growth and returns are lower than they were in the past. In fact, data from the Federal Reserve indicates that in the aggregate, US households still have not recovered in their total net worth back to where they were before the crisis began. As a result of this difficult environment, where household net worth in the aggregate has stagnated, the financial planning industry too has been suffering, as firms struggle to grow their revenues in the midst of sluggish organic growth, rising costs, and the lack of any tailwind from markets that mostly still haven't recovered to their pre-2008 highs. These difficulties in turn have led to numerous trends emerging and underway in the financial planning world, from the turn towards alternative investments, to the search for new and different revenue models, to a struggle for marketing to new segments to reignite organic growth, an urge to merge and increase the size of firms to get better economies of scale, or outsource instead, and a drive to grow by acquisition. Overall, as long as the growth in household wealth in the aggregate remains sluggish, firms will be forced to spend more and more time fighting to capture a larger slice of the pie, since the pie itself is not growing the way that it used to.

The inspiration for today's blog post was a presentation delivered by Chip Roame of Tiburon Advisors at his semi-annual "Tiburon CEO Summit XXIII" which I had the honor of attending last month. During the presentation, Roame noted how the pool of available household wealth to which advisors provide services has been remarkably stagnant for the past 5 years (barely recovering back to the pre-2008 highs). A version of the chart is shown below (with data from the FRED Economic Database), which shows total household net worth over the past decade (in $trillions). 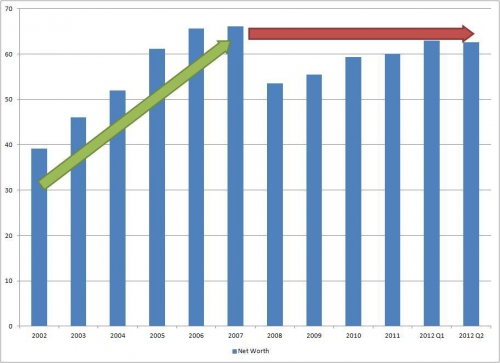 What's striking about the chart is the stagnation of growth since the financial crisis. Total assets were up nearly 70% from 2002 to 2007, but are still down since the peak. Similarly, the chart below drawn from Chip Roame's presentation shows a subset of this net worth - the amounts available for investment advice, including "Household Investable Assets" (i.e., bank/investment accounts) and "Household Retirement Assets" (i.e., retirement plan accounts) - which also rose by 70% from 2002 to 2007, but is up only 3% cumulatively since then. And notably, all charts are shown in nominal dollars, which means the stagnation is even worse on a real, inflation-adjusted basis. (For context, the other components of Household Net Worth not shown below include tangible assets {which includes equity in the home as a major component} and small businesses {the value of which has actually followed a very similar path}.) 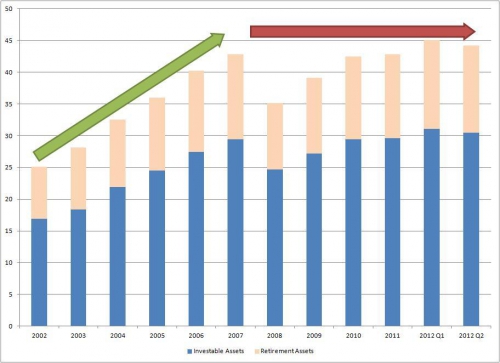 The implications of the chart are that, just as with investment markets overall, we are in the midst of what PIMCO manager Bill Gross has dubbed a "new normal" environment, where the average returns and growth of the marketplace in the past is simply not the same anymore. Instead, we are in a sustained environment of flat or very modest growth - a near stagnation of net worth - which in turn has significant implications for financial planning firms, many of which have already begun to play out.

The Impact Of Net Worth Stagnation

As a result of this fundamental trend - net worth stagnation for consumers in the aggregate for 5 years - the financial planning industry has been suffering a severe headwind of its own, which in turn is resulting in several shifts, including:

- Investment alternatives. Given that equity markets haven't even recovered to pre-crisis highs, while fixed income yields little, firms are struggling with the lack of a return tailwind that they enjoyed in the 5 years leading up to the financial crisis. As a result, there seems to be a reach for return, as both firms and their clients grow increasingly frustrated with the lack of growth. This in turn is driving a heavy shift towards investing in alternatives, which may often be declared as a reach for better diversification and risk management but in practice appears to be more of a reach for raw return. The drive for return is also pushing many firms towards more active investment strategies, as tactical asset allocation is on the rise as well. In other cases, firms are pushing in the opposite direction and trying to drive down cost, leading to a boost in passive investing as well, from Vanguard to DFA funds.

- New revenue models. Given the stagnation of the asset base upon which much of the industry calculates its fees, there has been a growing trend and desire towards alternative business and revenue models that can better facilitate growth, such as retainer fees and standalone financial planning fees. However, as I have written in the past, such approaches may not actually improve a firm's revenues in the long run, as retainer fees may have difficulty keeping up when growth gets underway again and in the meantime accentuates the cost at a time clients are feeling more fee-sensitive than ever, and charging separate financial planning fees may actually encourage clients to do less financial planning, not more. And of course, overarching this entire environment is the simple fact that if household wealth is not growing in the aggregate, then consumers are simply constrained in their ability to afford more financial planning services; in other words, if wealth in the aggregate isn't growing, consumers just can't afford more financial planning services in the aggregate, regardless of the revenue model being used.

- Marketing woes & new markets. One of the drivers for financial planning services are major life events, many of which are driven directly or indirectly by changes in income and wealth - from a new job, to the sale of a business, to the transition into retirement. As net worth has stagnated, so too has the influx of new potential clients to the financial planning industry, as the frequency of all these major life events has declined... leading to a world where more and more new business must be driven by attracting clients from other advisory firms. At the same time, the industry itself has been going through a massive shift to increase the extent of financial advice provided, regardless of business model and firm type. Accordingly, not only are there fewer new clients in play than ever, but the competition for those clients is fiercer than it has ever been. The net result: a dramatic slowing in organic growth and a drive to come up with new ways to market and attract new clients. For instance, while many firms have been attempting to go "downstream" and bring their services to a wider market for the benefit of consumers, it's probably not a coincidence that such expansionary plans have only gotten underway as growth as stagnated in the previously "core" marketing segments!

- The urge to merge. As financial planning firms struggle with stagnant household wealth, which leads to revenue growth in the aggregate that may barely even keep pace with inflation, there is growing pressure on profit margins as an increasingly sophisticated and advice-oriented staff requires greater compensation, not to mention the rising costs of office rent, technology and software to run the practice, and especially the rising cost of compliance. This combination of rising costs and weak revenue growth is pushing many firms to seek out greater efficiencies - which in turn is fueling an urge for financial planning firms to merge and try to get larger, in the hopes of obtaining some economies of scale for the costs to run a financial planning business.

- Outsourcing bonanza. For firms that cannot merge, the alternative has been to aggressively outsource, seeking to gain scale and efficiency by delegating key functions of the firm to external businesses that in turn have gained economies of scale by aggregating advisors. The outsourcing trend has manifested in everything from technology, server and software hosting, and cloud-based solutions, to outsourcing portfolio management functions (both operational or even investment decisions themselves), to basic office support from bookkeeping to administrative assistance. With the ever-increasing availability of bandwidth, the outsourcing trend is well poised for continued growth in the emerging digital age.

- Growth by acquisition. As growth rates for financial planning firms slow with the loss of any market tailwind (or the outright introduction of a headwind), and even a slowing of organic growth rates, firms are increasingly turning to the only alternative left for growth - inorganic growth by acquisition. As a result, there seems to be an increasing interest from many firms to acquire smaller firms and assimilate them for growth - a trend I have been witnessing up and down the spectrum, as $3B firms want to acquire $1B firms, $1B firms want to acquire $250M firms, $250M firms want to acquire $100M firms, and $100M firms want to acquire $20M firms. In some cases, this is compounded by a desire to not only grow revenues for the sake of growth (and profits as well, assuming margins can remain steady), but also to grow the business to a larger size to seek out economies of scale and greater practice efficiencies to maintain those profit margins.

Of course, the reality is that the difficult "new normal" economic environment has been a struggle for most industries; financial planning is not singled out in this case, but merely an example of the broader trend. At the same time, though, every industry experiences difficulties in its own way, and is still playing out in its own unique way in the financial planning world. Nonetheless, as long as the economy continues to be difficult, and household wealth grows slowly or not at all, expect these trends to continue - as growth becomes less and less about maintaining a slice of a growing pie, and becomes more and more about capturing a larger slice of the pie itself.