For the second time in just three years, yet another leader of the CFP Board’s Board of Directors has resigned – this time, it’s Chair-Elect Joseph Votava, who is stepping down to dedicate more time to his financial planning practice and his two new grandchildren.

And what’s odd is that while it does happen from time to time that a volunteer leader changes his/her mind about the commitment to leadership, Votava has a 20+ year history of volunteer leadership, as a former chair of the IAFP in the final year before its merger to become the FPA, a chair of the NEFE Board of Trustees, and more. So why would a veteran leader of the financial planning profession choose to capstone his volunteer career with an abrupt resignation as the Chair-Elect of the CFP Board, and was the CFP Board was trying to bury the announcement by quietly revealing it in the second paragraph of its monthly update email?

In fact, Votava’s resignation marks just one of a string of high-profile departures of CFP Board staff and volunteer leadership in the past two years, including its Director of Investigations, its Managing Director of Legal, and the lead counsel of its ongoing lawsuit with the Camardas. Which ultimately raises the question – was Votava’s decision really just triggered by a change of heart and a desire to spend more time with family, or is the reality that there is still trouble brewing with the Camarda case, and no one wants to be in the position of responsibility when the final verdict comes?

As a part of its monthly “Update” email, the CFP Board announced today that Board of Directors Chair-Elect Joe Votava had resigned – both as Chair-Elect and from the Board of Directors altogether – for the infamous reason “to spend more time with family” and support his financial planning practice. Votava’s resignation marks the second time a CFP Board leader has resigned in under 3 years, after former CFP Board Chair Alan Goldfarb resigned in late 2012 following allegations of improprieties regarding his compensation disclosure.

Fortunately, Votava’s resignation has not occurred under the same dark clouds that surrounded Alan Goldfarb – at least, not that we’re aware of? – yet the resignation still raises many troubling questions. The CFP Board announced Votava’s ascension to the Chair-Elect position last year with a full-scale press release and much fanfare, yet downplayed the announcement of his departure to a brief mention in its monthly email update?

In perhaps its clearest signal of how much the organization does not want us to notice and pay attention to the news, it wasn’t even noted in the subject line or the top announcement of the Update email, instead relegated to a brief sentence further down in the message! And sadly, this “bury the news” tactic is not new for CFP Board; it similarly tried to bury the announcement it was making drastic cuts to the Experience Requirement during the slow new cycle between Christmas and New Year’s last year! 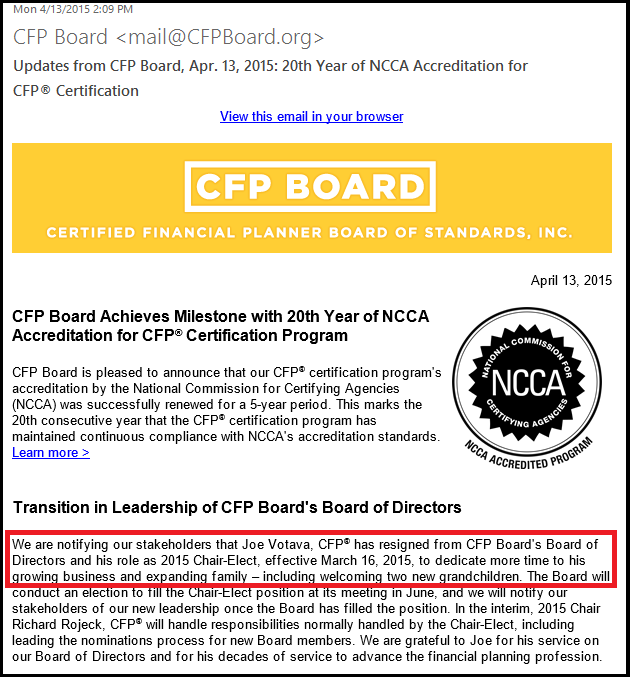 Yet while the public message is simply that Joe Votava has chosen to spend more time with his family, the reality is that Votava has a very long-standing history of volunteer leadership in the financial planning profession. He was the President of the IAFP during the controversial year it voted to merge with the ICFP, Chairing the organization in its final year of existence. He was a president of his local FPA chapter. He was a Chair of the Board of Trustees for the National Endowment for Financial Education. He’s chaired the CFP Board’s Public Policy Council and its International Advisory Council.

In other words, to say the least, Joseph Votava was and is a highly experienced volunteer leadership in the financial planning profession. And he is someone who is well aware of the burdens of volunteer leadership, and knows how to handle the commitments that the role entails. It would be one thing if he was a newly minted volunteer, who seemingly underestimated the burdens of leadership and changed his mind, but that is clearly not the case here. So what on earth compels someone with Votava’s kind of track record of success to capstone his volunteer career by resigning three months into his Chair-Elect year? Is it possible there’s something else going on?

An Ongoing String Of Camarda-Related Resignations

And notably, this isn’t even the first “quiet” resignation of someone in a key leadership position with the CFP Board in recent years. Beyond the controversial departure of Goldfarb himself, there was the departure of former Director of Investigations Rex Staples, then last fall the rapid departure – so quick there wasn’t even a replacement ready, despite CFP Board being embroiled in a lawsuit– of CFP Board’s Managing Director of Legal Michael Shaw, followed by the departure in January of Leo Rydzewski the CFP Board’s external lead counsel on the Camarda case to take an internal (non-Camarda-specific) position with the CFP Board. And now Joseph Votava.

In fact, not only has CFP Board faced a string of high-profile “resignations” in recent years, but the common thread to all of them up until now has been their connection to the Camarda case and the CFP Board’s ongoing lawsuit regarding its ability to enforce its compensation disclosure rules. And while Votava’s resignation has not acknowledged any public connection to the Camarda case, with the anticipated resolution of the lawsuit this year – and the real risk that the CFP Board may not prevail on all counts – it certainly raises the question of whether, once again, yet another person in a position of leadership with the CFP Board decided he didn’t want to be around and have to take the heat or be the fall guy when the case is finally resolved. If the CFP Board is really so certain it will prevail in its lawsuit, why does it seem like all the leadership associated with the case is fleeing the organization and why doesn’t anyone want to stick around and claim credit for the “anticipated” victory!?

In the end, I sincerely hope that Votava’s decision to resign really is nothing more than a decision to make more time for family, that he enjoys his time with his grandchildren, and that he is not burdened by any health issues or other personal complications that may have triggered his resignation. But the bottom line is that when a 20+ year veteran of volunteer leadership in the financial planning profession abruptly resigns for “business and family reasons”, it sure seems like there’s something else going on. So I suppose at this point, it just remains to be seen whether there’s another shoe to drop in the second curious case of a leader of the CFP Board’s Board of Directors in just 3 years, all seemingly tying back to the common thread of the CFP Board’s ongoing woes in enforcing its compensation disclosure rules and its unwillingness to just settle the lawsuit, engage the stakeholders to revise the rules, and move on.

So what do you think? Should we take the CFP Board’s announcement of Joseph Votava’s resignation at their public word? Does the situation strike you as odd? Do you think the resignation may be related to the upcoming resolution of the Camarda case, or something else?