One of the foundational principles of retirement success is to start saving early. After all, the longer that money can stay invested, the more compounding growth can work in your favor; all the better if your savings grow inside a Roth IRA and avoid the grinding impact of taxation.

Yet the reality is that clients really have two major assets: their financial assets, and their human capital asset. And when the client is young, the human capital asset is actually the bigger of the two by far. As a result, allocating savings towards human capital in ways that increase its value or growth rate can actually have far more impact than investments in financial assets; spending $2,000 on classes that produce a $1,000 raise in base salary can, over the next 40 years, generate nearly 20 times the wealth of merely saving the $2,000 in a Roth IRA and growing it for decades.

Does that mean that clients who allocate savings to retirement accounts when they're young are actually making an inferior long-term investment?

The inspiration for today's blog post was a recent conversation I had with another planner who is starting a firm intended to serve Gen X and Gen Y clients. As the planner noted, an assets-under-management business model would be difficult to run profitably, given that younger people often don't have an asset base to invest yet. "Indeed," I replied, "And you might find that the best way to maximize the young client's long-term wealth is to keep them from investing in financial assets at all!" 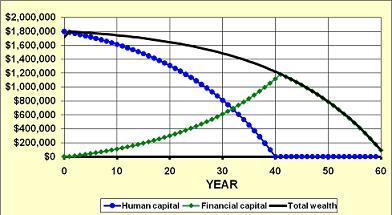 As a result of this dynamic, the reality is that clients actually have the potential to increase their total wealth by either increasing financial capital - saving more and/or generating higher returns - or by increasing their human capital - working more hours, more years, or growing income more rapidly.

As the chart above illustrates, the reality is that in a client's early years, the human capital - often simply quantified as the present value of future earnings - dominates the balance sheet, while financial capital is low. This is due primarily to the simple fact that there is an entire career's worth of earning years ahead.

Because of this, though, the reality is that making investments that alter the trajectory of an individual's future earnings can have a dramatic impact on the value of human capital and therefore on lifetime wealth. Whether it's a slight increase in earnings (that becomes the new base for future raises and income growth) or merely an increase in the growth rate of future earnings in the years to come, small changes have a big effect.

For instance, imagine a 25-year-old client who is looking ahead at a 40-year working life. Current earnings a few years out of college are $40,000. Assuming earnings increase at 3%/year for inflation, the client is anticipated to earn just over $3 million of cumulative earnings over the working years; at a discount rate of 8%, the client's human capital is effectively an $808,424 "asset" on the balance sheet.

On the other hand, improving the client's career trajectory has an even greater impact - if the client can generate a 1% real growth rate in income (i.e., grow income at 4%/year where inflation is only 3%), the human capital asset jumps in value (on a present value basis) by a whopping $112,374! Small changes have a significant impact over extended periods of time.

Choosing Where To Invest

The distinction between financial and human capital is important because the reality is that when clients have excess cash flow available to invest, there is a choice about where to invest it. Allocating the savings to a bank account or a Roth IRA represents a decision to invest in financial capital. Allocating the savings to take a class to advance education or improve job skills would be a decision to invest in human capital.

For older clients who are nearing or at retirement, the decision about where to allocate capital is clear - it should be directed to financial assets, which have to carry the full load of financial support when the human capital runs out at retirement. For younger clients, though, the decision is not nearly so straightforward.

For instance, imagine a client has $2,000 available to invest. The money can either be directed to a Roth IRA to generate tax-free retirement income in the future, or it can be used to take a series of classes at the local college on Microsoft Office that could potentially lead to a small promotion at work with a $1,000 increase in base salary.

Offhand, this seems like a losing proposition - spending $2,000 on classes leads to only a $1,000 increase in current income? Yet when viewed over the entire career, the outcome is quite different - as noted earlier, the net present value of the investment over the entire career is actually more than $20,000, representing a 1,000% return! Viewed on a future value basis, the extra earnings invested each year for the next 40 years would produce nearly $400,000 of future financial assets; by comparison, the $2,000 IRA would grow to "only" a little over $20,000 over the span of four decades. Thanks to the benefits of compounding, the human capital investment actually outperforms the IRA savings by a whopping 2,000%!

Risk and Uncertainty of Human Capital

It's certainly true that investments in human capital are not always the "sure thing" projected here. Not every investment in a class that improves productivity or job skills delivers a clear corresponding increase in income. Nonetheless, the "investment opportunity" is often still underrated; as the numbers here show, even spending $10,000 on education for a $1,000 lifetime increase in income is still an incredibly positive financial result (and superior to the Roth IRA investment, even if we tax some of the earnings along the way).

And of course, the example shown here merely projects the impact of a $1,000 raise; not the benefit of increasing job skills enough to generate a material promotion (e.g., a 10% raise!), or to set an individual's career trajectory on a higher overall growth rate (although as the numbers showed earlier, a 1%/year increase in income growth rate actually produces an ever greater impact than the $1,000 raise on a $40,000 base income!). Similarly, as noted in the past on this blog, more education and job skills are also associated with lower unemployment - if that $2,000 investment means you keep your $40,000 job and your neighbor is laid off, the benefit of the investment relative to your neighbor is even more dramatic than any of the projections shown here!

The point here is not to justify the high cost of a college education in particular - if the outflow is not $2,000, but $100,000 or $200,000 or more, the burden is really on the student to generate a higher income to come out favorably in the end. The point is simply that, even on a smaller scale basis, the principle still holds: even though there are many years to invest and grow money in a Roth IRA as a young person, the compounding benefits of investing in human capital can still be exponentially greater. Or viewed another way, investing in human capital in the early years can allow for even more savings towards financial capital in the later years after the income has grown... even when accounting for benefits like four decades of tax-free Roth IRA compounding growth.

So what do you think? Have you ever counseled a client to invest in their career and income growth instead of a retirement account? Or is it risky because the career payoff is still so uncertain? Is investing in human capital a rational and effective approach despite the uncertainty? Are young clients under-investing in career and over-investing in financial accounts?

(Editor's Note: This article was featured in the 15th Edition of Financial Carnival for Young Adults on Young Family Finance.)