Under the original rules for Social Security, workers upon reaching their "full retirement age" of 65 became eligible for a retirement benefit, with a slight increase in benefits if the worker delayed to as late as age 70. Later, prospective retirees also got the option to start benefits as early as age 62. Thus, under the current framework, those eligible for benefits can choose any starting age between 62 and 70, with an actuarial adjustment to benefits for starting earlier or later than full retirement age.

Since the adjustment to full retirement age is based solely on birth year, though, the reality is that those who are impacted cannot necessarily "do" anything to change the outcome at this point – which is to effectively cause a slight decrease in the value of Social Security benefits, as the prospective retiree must wait a little longer to get the full benefit (or take a reduction to keep claiming it at the previous full retirement age of 66). Fortunately, the total reduction is barely more than a 1% haircut, growing to a maximum reduction of about 7% once the full retirement age shifts all the way to age 67.

And notably, while the full retirement age is now later – which means starting benefits at age 62 is "even earlier" and causes more of a reduction, while delaying until age 70 is "less" of a delay and doesn't give as much of an increase – the relative value of delaying Social Security benefits isn't substantively changed. For those who are optimistic about life expectancy, concerned about market returns, or wanting to hedge against inflation, the value of delaying Social Security remains about the same. However, because of how early benefit reductions are calculated for survivor benefits, the new rules actually do substantially reduce the value of delaying widow(er) benefits for surviving spouses – at least, if they're not also facing the Social Security Earnings Test!

Under the original Social Security Act of 1935, workers had to reach age 65 to receive a full retirement benefit. This “full retirement age”, though commonly attributed to a similar “old age social insurance” program designed by Otto von Bismarck in Germany in 1889, was actually simply rooted in the fact that many state pension systems (and also the then-recent Railroad Retirement Benefit system) used age 65, and the Committee on Economic Security (which designed the US Social Security system) decided to adopt what was already common practice. 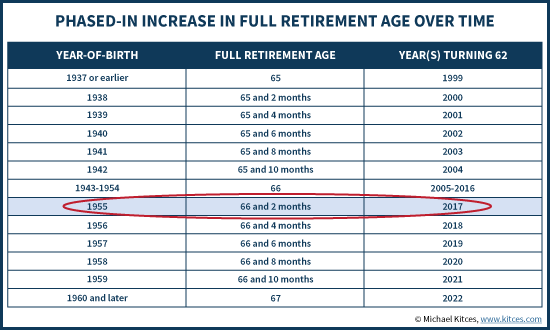 Given these birth years, the reality is that for more than a decade now – since 2005 – every prospective retiree, upon turning age 62 and becoming eligible for early retirement benefits, has had a full retirement age of 66 (as someone who turned 62 in 2005 was born in 1943).

The 11-year hiatus in adjustments to the Social Security full retirement age has come to an end!

The significance of the Full Retirement Age (FRA) is not merely that it’s the age at which retirement benefits become payable. Since 1956, women have been able to start benefits as early as age 62 (implemented at the time because wives on average were 3 years younger than their husbands and wanted to retire and start benefits at the same time), and the rule was expanded to allow men to retire early in 1961. However, to remain actuarially fair, Social Security stipulated that taking “early retirement” at age 62 would reduce benefits by 20%, which equates to 6.66%/year or 5/9ths of 1% for each month early.

With the increase in full retirement age, though, it suddenly becomes possible to retire more than 3 years early. Accordingly, the rules were adjusted to provide that any further early benefits – beyond the first 3 years – would be reduced at an additional 5%/year (or 5/12ths of 1% for each additional month). As a result, in recent years when the full retirement age was 66, the total early benefits reduction was 6.66%/year for the first 3 years early, and another 5% for the 4th year early, for a total reduction of 25%.

Consequences Of The Increase In Social Security Full Retirement Age

The significance of the increase in full retirement age from 66, to 66-and-2-months instead, is that now trying to take benefits at 66 is actually an “early” benefits election, resulting in a 1.1% reduction for starting payments 2 months before full retirement age.

For those who want to start as early as possible – at age 62 – doing so is no longer a decision to take benefits 4 years early. Instead, it’s 4 years and 2 months early, which means the age-62 benefits reduction is now 25.83% (instead of just 25%). Similarly, delaying to the maximum age 70 would not earn 4 years’ worth of Delayed Retirement Credits, but instead only 3 years and 10 months of DRCs, for a total increase of 30.67% (instead of the ‘full’ 32%).

The end result: benefits can never quite be as high as they were before at the maximum, and at any given age, Social Security benefits take a slight haircut. 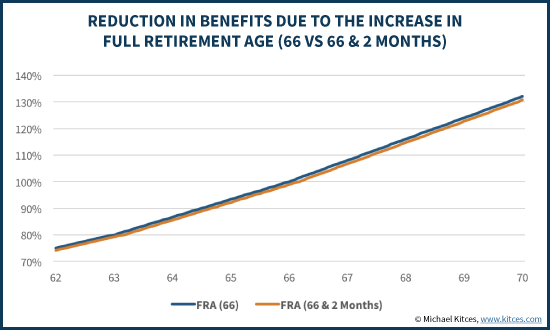 Notably, the impact of a rising full retirement age will continue from here for several more years as well. As noted earlier, the full retirement age is scheduled to go all the way to age 67 over the next 5 years, such that those born in 1960 or later – who start turning 62 in 2022 – will find when making their Social Security decisions that an age-62 starting date is a full 30% reduction, while delaying to age 70 is only a 24% increase. 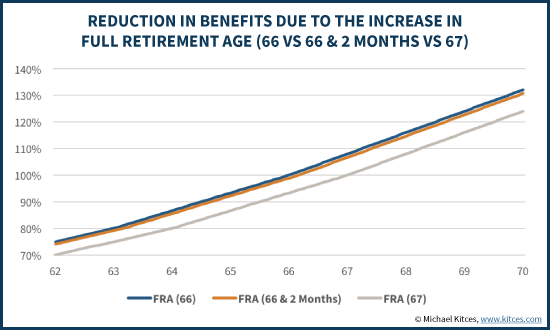 Other Adjustments From The Increase In FRA – Spousal And Survivor Benefits

In addition to changes the consequences of taking early or late retirement benefits, the change in full retirement age also impacts spousal and survivor benefits as well. 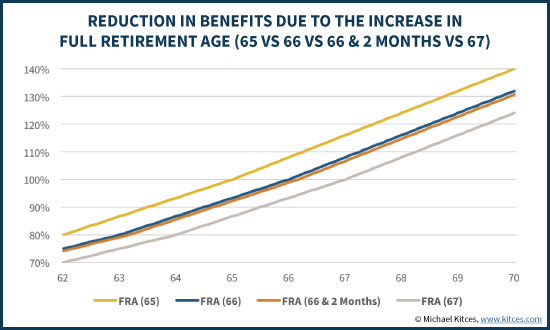 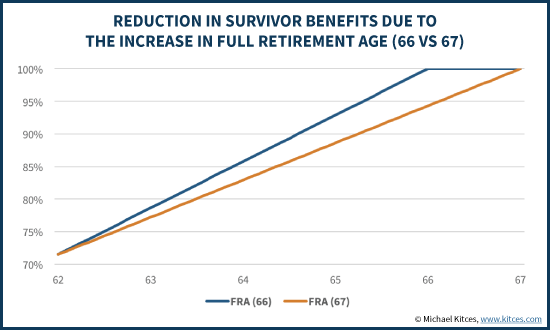 Notably, the end result of these rules is that for survivor benefits, it’s not any worse to claim survivor benefits at the earliest age 60 as the full retirement age increases (unlike for retirement and spousal benefits). In fact, by stretching out the same reduction over a longer period, it actually lessens the monthly impact of starting early (even as it increases the number of months that must be delayed to reach the full survivor benefit).

Ultimately, the reality is that for most retirees, there’s nothing to be “done” about the changes in the full retirement age. They’re a function of a law that was passed over three decades ago, which simply took until now (and the coming years) to finish their slowly-phased implementation, based on the retiree’s birth year. And obviously, there’s no way to change your birth year; for better or worse, you get what you get from here.

In addition, it’s important to recognize that while the increase in full retirement age makes the adverse consequences of starting at age 62 a little more severe (for retirement and spousal benefits) and the upside of waiting until age 70 less advantageous (for retirement benefits), it doesn’t materially change the relative value of waiting, and the breakeven period. 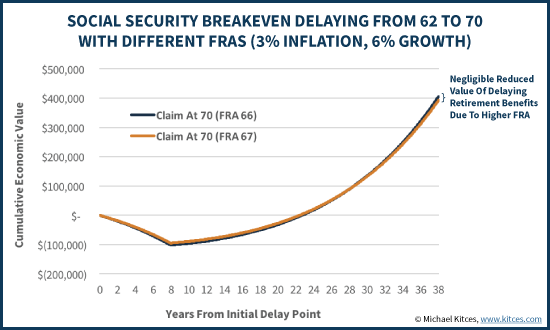 On the other hand, when it comes to survivor benefits, the changes to full retirement age (as it begins phasing in, in another two years) lessens the reduction for starting benefits early, which actually does make it less valuable to delay. In essence, if it takes another year of waiting to “undo” the full 28.5% early reduction, then it takes even longer to reach the breakeven period where the higher benefits outweigh the cost of waiting. Of course, it’s notable that when survivors have their own lesser retirement benefit, it may be beneficial to wait on survivor benefits until full retirement age, and claim individual benefits in the meantime (which can drastically reduce the breakeven period); nonetheless, at least on a standalone basis and when the Earnings Test won’t apply, later full retirement ages reduce the value of delaying survivor benefits, quite substantially. 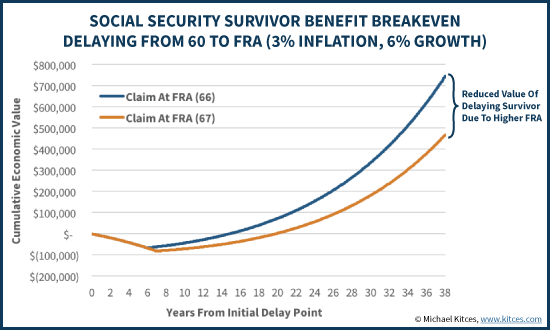 In most situations, though, the key is simply to recognize the change that is underway, and that after more than a decade of the standard “age 66 is the full retirement age”, this is no longer the case, nor is it standard that starting at age 62 reduces benefits by 25%, nor that waiting until age 70 increase benefits by 32%. Instead, for those turning 62 this year in 2017, the shift is on, with full retirement age of 66 and 2 months, a 25.8% haircut for starting early, and a 30.7% increase for delaying… and the transition will continue until 2022, when all retirees born 1960 or later have a full retirement age of 67, a 30% maximum reduction for starting early, and only a potential of 24% in delayed retirement credits for waiting until age 70! And in the case of survivor benefits, the transition will continue even longer, as full retirement age becomes "disjointed" until 2024!

So what do you think? Will this adjustment in full retirement age impact any of your planning recommendations? Are clients aware of this change? How significant will the reduction in benefits be for those born in 1960 or later relative to current retirees? Please share your thoughts in the comments below!