The standard advice in saving for retirement is rather straightforward: save as much as you can, starting as early as you can, to maximize the amount of your savings and how long it has to grow. The more you can get into the retirement account, and the longer that you can let it compound, the more affordable it will be to retire.

However, the reality is that trying to increase savings actually has a dual positive effect on reaching retirement: not only does it mean there’s more in the account to grow, but saving more reduces your retirement savings need. The reason, simply put, is that for any given level of income, the more you save, the less you’re spending to live on – and if you don’t spend as much to maintain your lifestyle, you don’t need as much saved up to replace it!

In fact, the impact of increased savings (and the associated reduction in spending) can actually go a long way to help bridge the gap for retirement, especially for late-stage savers. On the other hand, for those who are still younger, strategies that help to maintain (but not substantially increase lifestyle), and let future raises be directed towards savings instead, can dramatically accelerate the path towards early retirement as well by controlling the retirement savings need. In the extreme, highly frugal living allows for extreme early retirement, precisely because it facilitates both substantial savings, and doesn't necessitate much to achieve financial independence given that very frugality.

The bottom line, though, is simply to recognize that the reason big savers who live modestly are more able to retire is not just because of the savings itself, but the fact that a moderate spending lifestyle can dramatically reduce retirement savings needs in the first place!

The Benefit Of Saving Early And Often

Accumulating retirement savings is a combination of how much you save, the rate at which it grows, and how long you have to save and grow the account. In the early years it’s all about the amount you contribute, while in the later years the growth rate itself is the primary driver, but in the end, the more you can save and the longer it can grow, the more opportunity there is for compounding to work its magic.

In fact, given the sheer power of compounding in the later years (where the growth just compounds more growth), it’s possible to accumulate a whopping $1,000,000 account balance for retirement by doing nothing more than “just” saving about $300/month for 40 years from age 25 to 65 (and letting the growth compound in equities at an 8% average annual return). 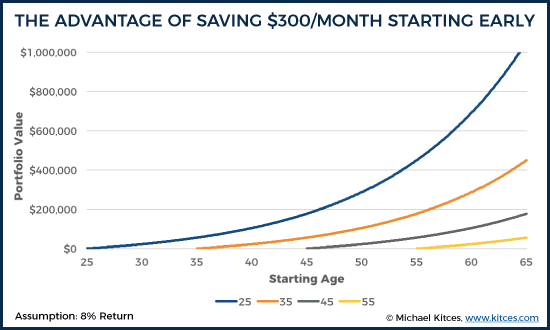 Of course, the “later stage” saver who wants to catch up can bridge the gap by saving more, although the shorter the time horizon, the more that the raw savings itself must bear the load (as there isn’t enough time for material compounding of returns). 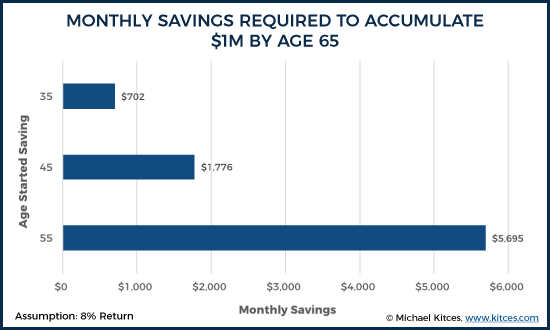 Needed Retirement Savings And The Double-Edged Impact Of Saving More

Notably, how much a prospective retiree saves doesn’t impact just their savings. Since you can only save what you don’t spend, for any given level of income, those who save more will by definition also be spending less. Which is important, because it means they won’t necessarily need to save as much to maintain that (reduced spending) lifestyle in retirement!

If Joe starts saving 15% of his income (and his income grows at 3%/year), then by age 65, he can save over $1.25M (which on top of projected $22,000/year of Social Security benefits, should be able to maintain his lifestyle at a 4% safe withdrawal rate).

Sally, on the other hand, can save 25% of her income (also growing at 3%/year), then by age 65 her account balance is up to nearly $2.1M instead. In fact, she had already reached Joe’s retirement account balance of $1.25M by the time she was just 60!

But the key distinction is that because Sally is saving more, she’s living on less, which means she doesn’t need as much as Joe to retire in the first place (at least to maintain that same lifestyle). Given that Sally is living on only $37,500/year instead of $42,500, she could have actually retired by age 54 instead – because her retirement savings need never climbed as high as Joe's in the first place!

In other words, the key change that happened when Sally decided to save more is that she both added more to the account for future growth, and reduced her retirement savings need in the first place! Which means it not only takes her fewer takes to achieve the same amount of savings, but she can retire even earlier because she doesn't need as much in the first place! 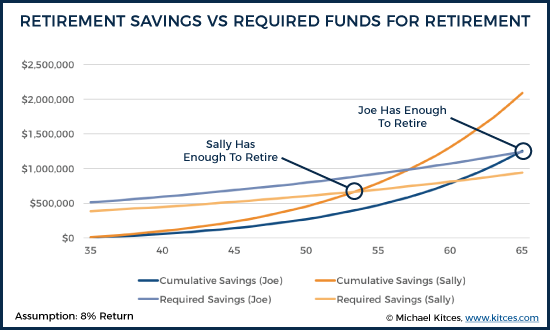 (Michael's Note: Technically, Sally would likely need to retire a few years later, as this graphic doesn't explicitly account for the additional savings Sally would need for the first ~10 years until her Social Security benefits began. Nonetheless, given her compounding account balance, this would likely only delay her retirement to approximately age 56, instead of 54.)

The fact that cutting spending to increase savings both adds to savings and reduces the retirement savings need is crucial for those trying to bridge the gap to retirement. Because it means that even just moderate spending changes can actually have an outsized double-impact.

Conversely, though, this is also why managing lifestyle creep – where lifestyle expenses creep higher over time as earnings grow – is so important, especially in the early career years when earnings tend to grow at a real rate above inflation. Otherwise, the rising lifestyle that often goes hand-in-hand with rising income means you can actually get further behind on retirement, even as you save!

Saving at a constant rate with rising income can put you further BEHIND when saving for retirement!

For instance, Charlie is a 25-year-old who’s gotten a good job paying $50,000/year at age 25. And because he maintains a moderate lifestyle, he’s able to save 15% of his income. Over the decade, his earnings grow at 5%/year above inflation (i.e., 5%/year in real earnings growth), which slows to “just” 2.5%/year of real earnings growth over the subsequent decade, and 1%/year in the decade thereafter. If we assume that Charlie will try to replace his then-current spending (everything he’s not already saving) at a 4% safe withdrawal rate, and grows his account balance by 7%/year in a moderate growth portfolio to keep pace with 3%/year inflation, then it turns out that Charlie is actually further from retirement at age 55 than he was at age 25! In other words, the retirement savings gap actually gets worse as Charlie's rising lifestyle increases his retirement savings need faster than he can actually save and grow his retirement assets! 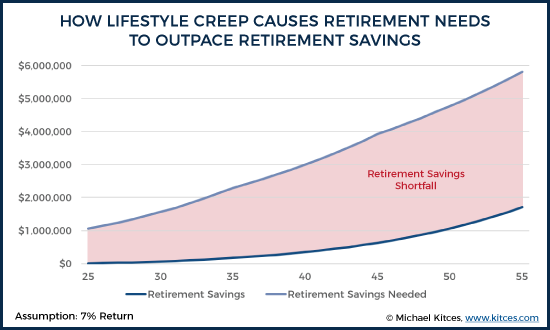 Given these dynamics, the reality is that “managing the retirement savings need” (by managing lifestyle expenses) is just as important as managing retirement savings itself. Because otherwise, a rising income paired with a rising lifestyle means retirement gets further out of reach – even in situations where you’re saving a steady percentage of your rising income. On the other hand, the reality is that if the saver can just maintain a consistent lifestyle, and allocate the majority of every raise to savings – thereby limiting how quickly the retirement savings need rises – it’s actually possible to retire much earlier!

For instance, continuing the prior example, assume that instead of saving 15% of his (rising) income every year, Charlie starts out saving 15% (or $7,500), but in future years he increases his savings by 50% of his annual raise. As a result, Charlie's lifestyle will still rise over time (given that he’s enjoying a real earning increase above inflation), but the slower increase in his lifestyle will slow how quickly his retirement savings need is rising, even as the growing savings turbocharges his retirement portfolio itself. The end result – instead of still being less than half way to his retirement savings at age 55, Charlie will have already retired by then! 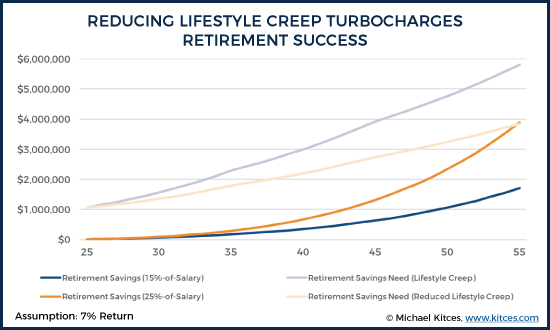 In fact, the ability to manage lifestyle creep and live modestly is also a driving force in the success of the “extreme early retirement” movement, where savers try to save the overwhelming majority of their income. Because doing so simultaneously allows for substantial savings, and drastically reduces the retirement savings need. For example, a 30-year-old dual-income couple who earn $120,000/year but manages to live on just $30,000/year, and saves $70,000/year (after taxes) growing at 8%, could have enough money to retire at that inflation-adjusted $30,000/year by age 40 (again assuming a 4% safe withdrawal rate)! In other words, the couple could retire after just 10 years of working (akin to early retirement icons like Mr. Money Mustache).

Of course, not everyone will necessarily have the ability (or lifestyle inclination) to manage their expenses to that extent. Nonetheless, the fundamental point remains: that good savings habits not only help to accumulate for retirement but also amplify their impact by reducing the amount of the retirement need in the first place… and the two combined together can go a long way to quickly bridge a retirement savings gap!