The FPA has suggested that its declining membership count is a result of its strong and passionate advocacy positions - in particular, its high Standard of Care and its positions on fiduciary financial planning - which have perhaps alienated some current/former/prospective members, but defends its positions (and their membership-limiting consequences) as being a necessary result of its mission to advance the financial planning profession.

The inspiration for today's blog post is a recent article by Bob Veres for Financial Planning magazine entitled "The FPA's Dilemma" that discusses some of the recent membership challenges of the Financial Planning Association. What's notable about the article is that, unlike some other recent criticism of the FPA (for instance, Andy Gluck's article in Financial Advisor magazine earlier this year) which focused on its fiduciary positions, the SEC lawsuit, and the split with the broker-dealer community and the Financial Services Institute as reasons for declining membership, Veres suggests that the problems with FPA membership relate to challenges with staff and leadership, the idea that people "send the FPA their dues and get little or nothing in returns", and the FPA's relationship with its sponsors and product vendors. In other words, Veres is suggesting that the membership problem is NOT simply FPA's fiduciary advocacy stance and its high standard of care excluding people.

And there appears to be some credibility for that notion. Earlier this week, I discussed how financial planning seems to slowly be winning the fiduciary war from the inside out, as the percentage of financial advisors that are CFP certificants - and therefore people who are taught a fiduciary process and commit themselves to the CFP Board's fiduciary obligation in the Standards of Professional Conduct when providing material elements of financial planning - is rising, and may at some point reach a critical mass level where the majority of the industry already practices as a fiduciary, and therefore fiduciary regulation may become a fait accompli. 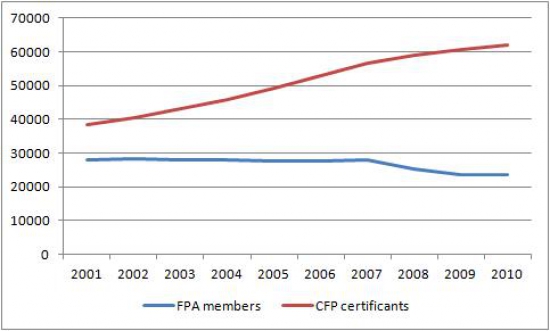 To me, this suggests that Veres may be right about at least some of the concerns he raises. Personally, having attended the FPA Experience conference myself (which Veres rails against as being very vendor-tilted), I found the exhibit hall to be much more rounded out with a range of relevant product and service providers for financial planners that what Veres suggests. In point of fact, I have long suggested that the opportunity to see the FPA Experience exhibit hall - the greatest gathering anyplace in the country (in the world!?) of product and service providers focused on financial planning - is actually one of the PRIMARY reasons TO attend the conference, even more so than the content! Personally, I'd like to see the exhibit hall of the conference expanded further, to truly make FPA Experience the "big show" in financial planning.

Nonetheless, Veres has some valid points about other areas of concern for the FPA, from its occasional difficulties in driving discussion on its website forums, to some of the criticisms on its research, to the challenging reality that most of what FPA members receive for their dues is at best intangible and sometimes ephemeral. And although Veres doesn't note it, I know I've personally heard a lot of feedback that a major challenge of FPA is the inconsistency of the chapter experience - a difficulty I've witnessed personally as I travel to speak to many FPA chapters across the country every year.

Of course, the reality is that every organization faces challenges these days, and it would be unrealistic to expect the FPA (or anyone else) to be perfect. And similarly, we may not all agree about exactly what the primary problems are at the FPA. But I think the Veres article deserves some real acknowledgement for its emphasis that the problems with FPA's membership may NOT merely be the result of its fiduciary advocacy and standards of care. In fact, it arguably might not even be much of a differentiator at all anymore - although it was still the closing line in the FPA leadership's recent article in defense of its current direction - in a world where an increasing majority of those who really do believe in financial planning have already obtained the CFP marks, thereby making FPA's standard of care redundant at best. Perhaps the FPA should drop its own standard of care entirely, and simply embrace "having CFP certification" AS its standard of care, given that the CFP marks are clearly emerging as the dominant benchmark designation of the profession, and merely capturing 2/3rds of all CFP certificants as FPA membership would nearly double their membership!

In any event, though, at least amongst the now-over-63,000 CFP certificants who already do adhere to the CFP Board's standard of care, the question remains why more are not attracted to FPA membership? Wouldn't membership in the FPA be appealing, if only for advocacy back to the CFP Board? For that group it least, it seems unrealistic to suggest it's because of the FPA's Standard of Care. Which implies that perhaps the greatest challenges for FPA membership are not because of its fiduciary views... but instead is in spite of them?