As 2014 approaches, the new health insurance exchanges will begin their open enrollment, and along with the new exchanges will come the premium assistance tax credit, intended to make health insurance purchased on an exchange more affordable for the "lower income" - which is actually broadly defined to include everyone up to 400% of the Federal Poverty Level. As income rises, the premium assistance tax credit is slowly phased out, until eventually it provides no benefit at all.

However, the reality is that because the premium assistance tax credit phases out as income rises, it indirectly serves as a surtax that triggers higher marginal tax rates for those who are phasing the credit out. And the marginal impact is actually quite significant; at relatively modest levels of gross income from $25,000 to $50,000 of income, the premium assistance tax credit effectively doubles the marginal tax rate (to more than 30%) for those who are purchasing health insurance from the individual exchange. For older households that are claiming Social Security early, but still obtaining health insurance from an exchange (as they're not eligible for Medicare yet), the effect can be even more severe, as marginal tax brackets, the phaseout of the premium assistance tax credit, and the phasein of Social Security taxability all overlap.

The end result doesn't mean that it's a good idea to avoid generating income - the marginal tax rates are significantly higher than just the individual's tax bracket, but nowhere near 100% tax rates. Nonetheless, the introduction of the premium assistance tax credit may mean a whole new level of in-depth year-to-year tax planning for those with relatively modest incomes, who can be subject to surprisingly high marginal tax rates under the new rules.

The Premium Assistance Tax Credit (PATC), established under IRC Section 36B as a part of the Affordable Care Act, takes effect in 2014, and is intended to help make health insurance more affordable by providing a tax credit to subsidize the cost of insurance for “lower” income individuals who purchase health insurance from one of the new state insurance exchanges (the PATC does not apply for employer-provided health insurance). For the premium assistance tax credit, “lower” income is defined as those households that earn less than 400% of the Federal Poverty Level (FPL). The Federal Poverty Level thresholds are adjusted for inflation each year, and are determined based on the number of people in the household. For example, in 2013, the FPL was $11,490 for an individual and $23,550 for a family of four, which means at least some premium assistance credit is available for households with incomes up to $45,960 for individuals and $94,200 for a family of four.

“Income” for the purposes of the premium assistance tax credit and the FPL is based on modified Adjusted Gross Income (AGI), which means AGI increased by any income not reported due to the foreign earned income or housing cost assistance exclusions, any tax-exempt interest (i.e., municipal bond income), and any Social Security benefits that were excluded from income. In other words, household income for the purposes of the credit will include all bond interest (taxable or tax-exempt), and all Social Security benefits (taxable or tax-exempt).

How The PATC Can Boost The Marginal Tax Rate

The complication that arises with the PATC is that, because it is calculated based on income (or at least, the maximum premiums owed are calculated based on income, which indirectly means the credit is determined by income), generating more income not only creates the usual tax burden associated with income, but it can also trigger a phaseout of the PATC (at least up to 400% of the FPL, as beyond that point there is no PATC at all). For example:

Notably, the interaction of income and the premium assistance tax credit does not mean the individuals and couples/families wouldn’t benefit from earning more income (the tax rate is “only” 30.53%, not greater than 100%!). It does mean, however, that the marginal tax-related burden on additional income for those below 400% of FPL is significantly greater than just their marginal tax bracket.

Ultimately, the impact of the PATC on someone's marginal tax rate will depend on where exactly they fall on the income spectrum (and based on their family size as well, as the FPL thresholds vary depending on the number of family members in the household). The figure below shows how the marginal tax rate of a middle-aged married couple changes as their income rises, assuming they claim a standard deduction ($12,200 in 2013), two personal exemptions ($3,900 each in 2013), and have an annual health insurance premium of $7,000 for the two of them ($583/month before premium assistance tax credits). 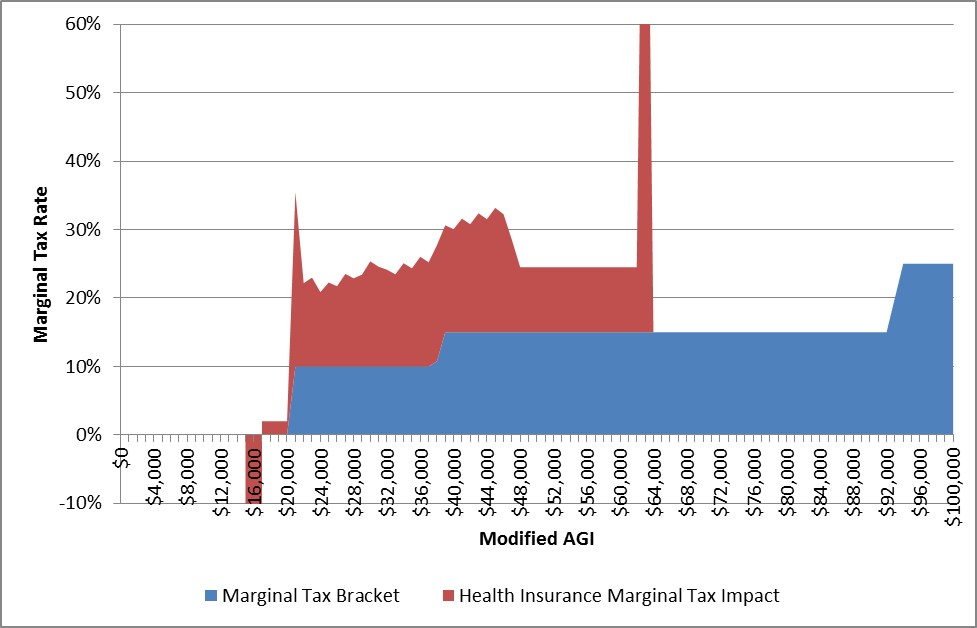 As the chart reveals, the impact of income of the tax credit threshold – and the higher health insurance obligation that results – leads to a more-than-doubling of the couple’s marginal tax rate. As their tax bracket rises from 0% to 10% to 15% (in blue), the tax-equivalent rate from health insurance is another 13% to 18%, resulting in a total marginal tax rate as high as 33% as the couple approaches the 300%-of-FPL threshold (which is only $46,530 of income, yet already facing a 33% tax rate!). The chart also reveals three other notable “spikes” – crossing above 100% of FPL (where the credit kicks in to begin with, essentially resulting in a favorable “negative” tax rate, assuming the couple wasn’t already eligible for Medicaid); crossing 133% of FPL, where the premium assistance threshold jumps from 2% to 3% (this is due to how the PATC tables work; from that point forward, rising income increases the threshold proportionately and not as a jump); and crossing above 400% of FPL, where the premium assistance tax credit is eliminated entirely and the couple must suddenly bear the full cost of their health insurance premiums. In this case, the maximum premium just before 400% of FPL is just under $5,900, while the full premium is $7,000, resulting in a “spike” of $1,100 of premiums for the last $1 that pushes the couple over the 400%-of-FPL threshold. 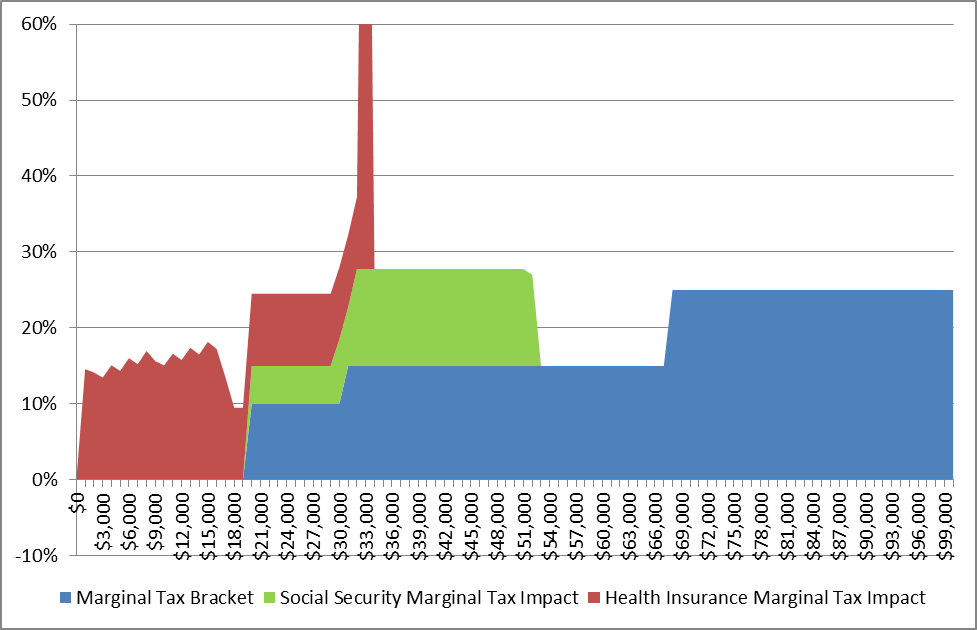 It's also important to note that, in addition to the issues shown above, for those below the 250%-of-FPL threshold, the marginal tax rate impacts indicated above could potentially be even more severe, as the additional Federal cost-sharing subsidies (that reduce out-of-pocket obligations and the maximum annual out-of-pocket limit) are also phased out.

The bottom line, though, is simply that for couples proceeding through these “lower” income thresholds – specifically from 100% to 400% of FPL – it will be especially important to proactively manage income. In some cases, it may even be more desirable to lump income together in a single year – deliberately driving it into the 15% and even 25% tax brackets beyond 400% of FPL – to avoid having the income taxed at higher marginal tax rates in future years. Overall, year-by-year tax planning will become more important than ever for individuals and couples eligible for and claiming the premium assistance tax credit, given that all good tax planning decisions should be made based upon their marginal tax rates.

(Michael's Note: This article is an excerpt from the July/August 2013 issue of The Kitces Report. Click here for further information about this and other newsletter issues, including eligibility for CFP CE credit. Enter discount code "PATC10OFF" in the month of October for a 10% discount for new subscribers to "The Kitces Report" auto-pilot program!)

How to Find Planning Opportunities When Reviewing A Tax Return

In addition to making updates for 2022 tax forms and new tax laws, we have also made several learning experience improvements based on advisor feedback.