As the 2013 tax preparation season wound to a close in April of this year, many investors discovered for the first time a costly new line item on their tax return: "Other Taxes" on Line 60 of their Form 1040, where they reported the new 3.8% "Medicare surtax" on net investment income that just took effect in the past year. While "only" a 3.8% rate, the new tax is significant for many types of investment income eligible for a preferential rate; after all, adding 3.8% to a 15% long-term capital gains rate is actually a 25.3% relative increase in tax burden!

Given this dynamic, investors whose investment income is in the "crossover zone" and straddles the income threshold - such that only a portion of their investment income is subject to the surtax - have a unique planning opportunity to shift income into other years where they do not face the crossover zone. In fact, there are even situations where it can pay to shift retirement distributions or conversions into a year where overall income is higher if it avoids the crossover zone (and of course, shifting income into years when income is lower is often also favorable). At a minimum, though, recognizing the crossover means acknowledging that the marginal tax rate may be higher than just the tax bracket alone, leading to additional tax planning opportunities but requiring more careful analysis as well!

As a part of the Patient Protection and Affordable Care Act of 2010, the new IRC Section 1411 established a 3.8% Medicare surtax on investment income, first taking effect in 2013 and reported on the brand new Form 8960. (In addition, a separate 0.9% Medicare surtax on earned income also took effect last year.) The new 3.8% Medicare surtax applies only to “high income” individuals, defined as those having Adjusted Gross Income (AGI) in excess of $200,000 (for individuals; $250,000 for married couples). (For any expatriates, AGI is modified by adding back any foreign earned income exclusion.)

Notwithstanding the broad sweep of the new Medicare surtax to a wide range of “investment income”, the rules under IRC Section 1411 do explicitly exclude any income that is tax exempt in the first place (e.g., municipal bond interest, or the portion of capital gains on the sale of a primary residence that is excluded from income). In addition, the rules explicitly state under IRC Section 1411(c)(5) that any taxable distributions from any retirement accounts, including 401(k)s, 403(b)s, 457(b) plans, profit-sharing plans, IRAs, and Roth IRAs, as well as Roth conversions, will not be treated as “investment income” for the purposes of the 3.8% Medicare surtax. 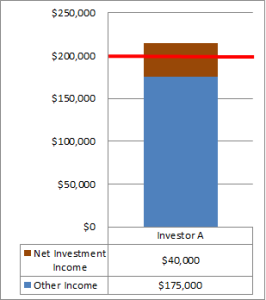 Assume Betsy, a single taxpayer, has $175,000 of employment income (blue box income in the chart to the left) and $40,000 of capital gains (brown box investment income). Her Adjusted Gross Income (AGI) will be $215,000, and since she is over the $200,000 threshold for individuals (red line in chart) she will be subject to the 3.8% Medicare surtax on the last $15,000 of her capital gains (the portion of the brown box that is over the red line), as shown in the chart to the left. If Betsy recognizes any additional capital gains (making the brown box bigger), they will all fall on top above the threshold for the 3.8% Medicare surtax and thus also be subject to the tax. 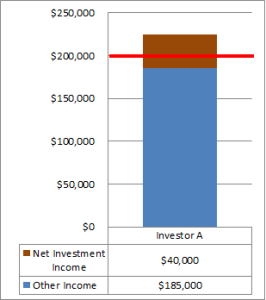 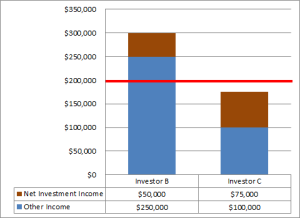 From a planning perspective, situations where the crossover zone is in effect lead to a higher tax burden on both investment income itself (to which the surtax applies directly) and other non-investment income (which triggers the tax indirectly). Thus, for instance, an individual who thought they were in the 28% or 33% ordinary income tax brackets might find their marginal tax rate to be more like 31.8% or 36.8% due to the Medicare tax triggered in the crossover zone.

While the marginal tax rate impact is “only” 3.8%, this is still significant in situations where the timing of income can be controlled and managed. For instance, Roth conversions are best executed in years where the current tax rate will be lower than the future tax rate; if the reality is that the current tax year has an elevated marginal tax rate due to the crossover zone, this may be a less favorable year for a Roth conversion (all else being equal). Similarly, when choosing whether to contribute to a Roth IRA or a traditional IRA (and claim the tax deduction when the crossover zone applies for greater tax savings), or evaluating the timing IRA withdrawals for retirees, the impact of the crossover zone on the marginal tax rate may be a factor that makes it more appealing to shift income into one year or another. 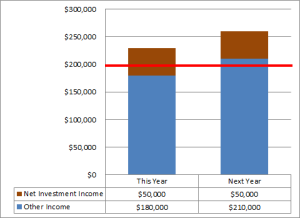 In situations where income is more volatile, and the crossover zone may apply in some years but not others, the optimal planning strategy will generally be to try to shift income into the year that is not the crossover zone. For instance, with the chart to the right, the better outcome may actually be to shift income from the current year into next year, even though income is projected to be higher next year, because the current year includes the 3.8% surtax in the crossover zone and next year does not (and assuming the client has at least ~$25,000 of exemptions and deductions, will be in the 28% tax bracket either way). Of course, if income will be lower in a future year, the income shifting strategy may be all the more advantageous, saving both the difference in the tax brackets and the 3.8% surtax for crossover zone income that can be pushed down the road.