In order to do a financial plan for a client, it's necessary to determine the client's time horizon - which at the most fundamental level, is the time the client is expected to live. The client's life expectancy can impact the number of years of anticipated retirement, and even the age at which the client chooses to retire. Unfortunately, though, it's difficult to really estimate how long a client will live, and the consequences of being wrong and living to long can be severe - total depletion of assets. As a result, many planners simply select a conservative and arbitrarily long time horizon, such as until age 95 or 100, "just in case" the client lives a long time. Yet in reality, the life expectancy statistics are clear that the overwhelming majority of clients won't live anywhere near that long - unnecessarily constraining their spending and leading to a high probability of an unintended large financial legacy for the next generation. As a result, some planners are beginning to use life expectancy calculators to estimate a more realistic and individualized life expectancy for a client's particular time horizon. Will this become a new best practice?

The inspiration for today's blog post was a recent conversation I had with another planner about determining an appropriate time horizon for a client's retirement plan. Like many planners, her approach was to set an arbitrary but conservative time horizon for clients - e.g., until age 95 - and then modify it further if the client has longevity in the family. In a particular recent situation, she had a client whose mother had lived to age 97, so she had decided to project the couple's retirement plan out to age 100.

While it's certainly prudent to be conservative in setting a time horizon for retirement withdrawals, and to take into account an individual's personal and family circumstances (e.g., "good genetics" and longevity in the family), I couldn't help but wonder if this is still too conservative of a projection. After all, as the chart below indicates (from Spending Flexibility and Safe Withdrawal Rates by Michael Finke, Wade Pfau, and Duncan Williams from the March 2012 issue of the Journal of Financial Planning, and based on the Social Security Administration period life table for 2007), the probability of a joint life expectancy of 30 years for a 65-year-old couple (to age 95) is already as low as 18%. A 35-year life expectancy for that same couple (to age 100) has a mere 3.7% likelihood. Which means adding 5 years of longevity for "good genetics" on top of an already low probability scenario is a pretty huge adjustment. 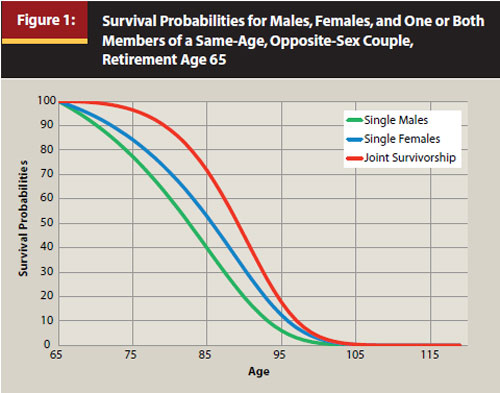 Yet the problem isn't just adding 5 years of joint life expectancy in light of the client's family longevity. The real concern is adding 5 years of joint life expectancy for what in the end was just one family member. After all, even a relatively unhealthy family with poor longevity can still end out with one long-living family member due to random chance! In other words, taking the life expectancy of one family member from the past and generalizing it to the client's future isn't necessarily much better than taking an example of one technology stock like Apple and concluding that all technology stocks will be fantastically profitable in the future. Especially if you're planning for a couple, and the family member is only from one side of the family!

So what's the alternative? Some planners are beginning to use life expectancy calculators available on the web, that analyze a wide range of factors from family longevity to health issues to behavioral habits, to try to get a more accurate picture of the client's life expectancy than a few anecdotal family data points. The most popular option appears to be the site LivingTo100, which draws on data from the New England Centenarian Study to try to get a good picture of how likely it is for the client to live to age 100 and what his/her individualized life expectancy would be.

Is It Worth Estimating Life Expectancy At All?

Many planners I know still suggest it's not necessary or appropriate to estimate a client's life expectancy at all, given that life expectancy is just a probabilistic estimate, and there's always still a 'risk' that the client will live to age 100. Accordingly, they suggest, we should just set every client's retirement time horizon to an arbitrary conservative number like age 95 or 100, just to be certain the client doesn't run out of money on the planner's watch.

Yet the reality of the life expectancy tables is that the overwhelming majority of clients will never live this long, or even come close. And even while life expectancy continues to increase over time, most improvements in life expectancy have been driven by eliminating diseases and reducing mortality for the young (especially infant mortality); the death rate for people in their 80s and 90s has only fallen very slightly in the past 50 years.

This is problematic because, in the end, excessive conservatism does have a cost - it can greatly impinge on the client's ongoing lifestyle and opportunity to enjoy the money while health is good enough to really enjoy it. As noted in the blog earlier this week, the difference between a 40-year time horizon and a 20-year time horizon is a 5%+ safe withdrawal rate versus a less-than-4% withdrawal rate. Which means a couple that has some health issues and a low likelihood of living much beyond 20 years, that still receives a 35-40+ year arbitrary time horizon, must endure a lifetime spending cut of 20% per year forever (and a very high likelihood of 'accidentally' leaving a giant unspent financial legacy behind)! Alternatively, a client with a shortened life expectancy might even choose to retire earlier, knowing that the retirement time horizon isn't as long, and that consequently not as much savings is needed.

Ultimately, it seems to me that because being too conservative does have a cost - along with being too aggressive - that life expectancy calculators may well become a best practice for planners in the future, as it represents an effective means to ensure that the client's plan matches a time horizon that is reasonable given his/her life expectancy, that is neither too long nor too short. Of course, clients may adjust up or down from there, but at least they will be grounded to a reasonable life expectancy starting point.