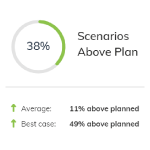 Dave Ramsey has hosted the popular “Dave Ramsey Show” radio program since 1992 and founded Financial Peace University in 1994. Since then, he has helped millions of people with personal money management issues and has authored several best-selling books. Despite his popularity, though, many financial advisors have criticized the investment and debt management advice Ramsey frequently gives his listeners and readers. And while some of the advice that Dave Ramsey has given (e.g., assuming a 12% stock return, endorsing the debt snowball method of reducing overall debt, and encouraging 8% retirement distributions) may not result in optimal outcomes from a strictly technical perspective, the reality is that Ramsey’s advice has effectively helped millions of individuals and families reduce their debt, manage their money responsibly, and get on track to establish good financial habits.

For instance, while most advisors would agree that Dave Ramsey’s 12% return assumption for stock market investors is an alarmingly high return assumption, the reality is that using a high return assumption helps clarify the power of compound interest and the magnitude of potential wealth that can accumulate when new investors start saving early. In other words, the more compounding you see yourself missing out on, the more “FOMO” (Fear Of Missing Out) motivation it can inspire… which in practice, has been an effective motivator for many of Ramsey’s followers to start developing good savings habits!

Similarly, Ramsey’s advice to use the ‘debt snowball’ method – which advocates paying down one’s smallest debts first (in contrast to debts with the highest interest rates) as a means to tackle personal debt – is also under frequent attack. Yet while there’s no question that mathematically, paying off loans with the highest interest rates first is the most financially efficient method of debt reduction, borrowers who feel overwhelmed by debt are often more motivated to stick to a debt paydown plan when they experience the small psychological victories of eradicating their debt one at a time. Which means the most psychologically motivating approach really is to tackle the smallest debt first – actually pay it down successfully – changing one’s self-image to someone who can successfully tackle the rest of their (higher-interest) debt, too.

And many financial advisors, especially those who observe Bill Bengen’s 4% Safe Withdrawal Rate rule as the established norm, have also criticized Dave Ramsey’s 8% retirement distributions as dangerously high. However, while an 8% withdrawal rate is high, it is not necessarily as catastrophic as most advisors would suggest, given both the reality that many retirees can and do adjust their spending later if it becomes necessary… and that in practice, most retirees reduce their spending in the later years, anyway. Furthermore, higher withdrawal rates can be rational when we account for a retiree being willing to take some risk of running out of money, particularly when they have some guaranteed income, like Social Security, to provide a spending floor. And in practice, particularly for the audience that Ramsey is trying to reach, which may include individuals who got into debt trouble or started saving at a later point in life, a 4% withdrawal rate necessitates so much in retirement savings that it may simply feel unachievable for many – which, again, could de-motivate them from retiring (or saving) at all – while an 8% withdrawal rate target may feel like the goal is more achievable… which, again, helps them to actually follow through and take positive steps that improve their financial situation!

Ultimately, the key point is that even though Dave Ramsey may draw a lot of criticism from financial advisors who analyze his recommendations from a mathematical and technical perspective, he is very effective in helping a large number of people to change their financial behavior for the better, particularly those who need to get started on a substantively different path than the problematic one they are currently on (and may feel stuck on). His ability to help people modify their behavior may not rely on optimal advice from a technical standpoint but, notably, being ‘right’ isn’t necessarily always the most important factor for motivating and encouraging people to take the first major step of change in the first place. And so from a behavioral change perspective, there is quite a bit of ingenuity within Dave Ramsey’s advice (and the systems he has created to deliver that advice) that advisors may want to reflect on when helping their own clients change their behavior for the better!