It is with mixed feelings that today I face my 37th birthday – a unique milestone for me, as it marks the maximum age threshold for NexGen, a group I helped to co-found 10 years ago (with the original inauspicious name of "Mouseketeers"!), and for which I was perhaps the most ardent advocate for having a maximum age as a requirement for membership. Now, a decade later and with no small amount of irony, I find myself being “forced out” – or as I like to put it, “graduating” – under the very age-based rule I fought so hard to keep in place early on. For me, today is a day of change, of transition, and of rebirth as I close the book on one decade of my life, and open to the next.

However, while I do have some mixed feelings about today, I have to admit that I have zero regrets for having pushed for this NexGen membership criterion that has become my own NexGen membership demise. In point of fact, I think in retrospect we set the age limit too high, and something around age 33 would have been better (kudos NAPFA Genesis for getting this right). The point of the age limit was to ensure that the NexGen membership could remain relevant to each other, yet the world changes fast enough that for someone who starts at age 22 straight out of college (as I did), the 22-year-olds coming into the profession 10 years later already face a new reality that is substantively different. I certainly witnessed this in my own context; when I started as an advisor, I was cold-calling to offer sales of Variable Universal Life and the forgettable-but-not Munder NetNet fund, and there were just a handful of undergraduate programs teaching financial planning at all. Within a few years I was fortunate enough to become the Director of Financial Planning at Pinnacle Advisory Group, but it literally took four more years after that before I met another person who even had a similar job title, as most firms were too small to have any depth of professional planning staff (much less the infrastructure to necessity a “director”). What a difference a decade can make in how advisory firms are staffed and operated!

Accordingly, looking back I’m actually thankful that we kept the age limit in place; putting it there has ensured that the group remains focused on the issues of “young” planners entering the profession, as it was intended. Without an age limit, the group would have “aged” as we did, and simply become a snapshot-in-time group of us Gen Xers who started in the business in the late 1990s and early 2000s. Instead, those of us who started NexGen and were its early members have “aged out”, moved on to our own study groups and finding other ways of connecting, and NexGen has already almost fully completed its own demographic change from being a “Gen Xer” group to being led by Millennials. Thanks to the age limit, the NexGen group is constantly forced to reinvent itself with new (youthful) leadership, preserving the integrity of its original intent through times of change, and going through a continual process of rebirth.

I suppose the theme of “rebirth” is particularly apropos, as my NexGen graduation today has a feeling of rebirth to me, of transition from one stage to the next, of closing the book on one chapter of my (professional) life and turning to the first page of the next. Fortunately, the passage of a decade has not sapped my energy – to the contrary, back then I merely had one job and role, as a Director of Financial Planning... a startling level of simplicity compared to all the businesses in which I’m involved today.

Notwithstanding the growing complexity, the passion I had when NexGen was created for for bringing young people into the financial planning profession and seeing them succeed as financial planners has not waned; instead, over the past 5 years we created New Planner Recruiting, more recently a new Jobs Board for financial planners called JobsFP, and this year launched XY Planning Network which has already catapulted forward in just over 7 months to nearly 50 of the most energized and exciting young planners who I truly believe will play a material role in shaping and reshaping the financial planning profession over the next 10 years. If anything, my greatest challenge today is that I see so much opportunity in our emerging profession, that it’s difficult to focus on picking just a few things to do at a time to help it along. Not surprisingly, I already have a few new business ideas cooking for 2015 - stay tuned!

Yet while 2015 may be a year of rebirth for me, I feel compelled to recognize what a (re)birth NexGen brought to me a decade ago. Looking back 10 years, at the time I would have never predicted I’d be doing… well, pretty much anything that I’m actually doing today. When 2004 started, I was already several years into my career, but I had never given a public speech nor written an article (I would do both for the first time that year), I had never held a position of volunteer leadership (which I would also do for the first time that year with the FPA Maryland chapter, but never accepted a position of NexGen leadership for personal fear of my ‘leadership inexperience’), I had never founded a business (and at the time insisted that I never would), and I had no idea that there was a community of other young financial planners going through the same kinds of career struggles and uncertainty that I was at the time and who would provide such transformative support for me. And as the photo below from the first NexGen conference shows, I didn’t even know about blue shirts yet. 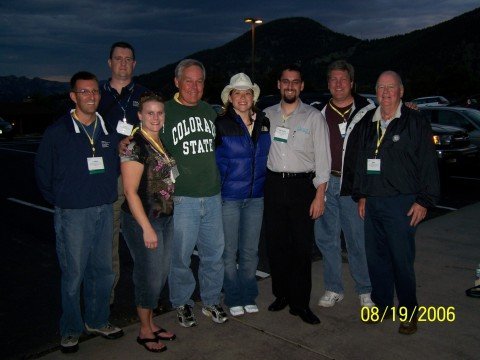 What a difference a decade can make. So much changes in 10 years. I'm actually thankful I didn't set goals, as I never would have predicted how much my life has changed. And I can’t wait to see what the next decade holds in store.

My Birthday Wish: As most of you know, I’m not one for material goods – I can’t even tolerate buying a variety of clothing! But if you have a moment, I’d love it if you could just share one story of how this blog and its content has impacted you. Maybe it was a client situation, or something in your own career/business life, or just a personal moment of revelation. In a world where there can be so much negative, I’d really appreciate it if you could help me celebrate today as a day of rebirth by simply sharing a story of how this content helped you to help a client (or yourself) through a similar moment of (positive) change and rebirth! Thanks! 🙂

PS- Thanks and credit to Ramit Sethi for this wonderful blogger-birthday-wish idea!