A fundamental aspect of financial planning is to help clients achieve their goals... yet the unfortunate reality is that some clients have difficulty even identifying productive goals in the first place. And for some, even upon achieving their goals, they find the outcome unsatisfying, resulting in a new, greater goal of "more" in a never-ending cycle. To say the least, many clients find that setting and achieving their goals does not result in the happiness they anticipated.

In this guest post, Dutch financial planner Ronald Sier shares some insights about the latest research on money and happiness from Elizabeth Dunn and Michael Norton, Sonya Lyubomirsky, and more, who have found that in fact there really are some ways to buy happiness... or at least, ways that money can be spent that is more likely to result in happier outcomes, from spending on experiences (rather than stuff), spending on others (not yourself), spending money to "buy" time, or directly spending to many small pleasures rather than a few big ones.

While many financial planners question whether it's appropriate for an advisor to "tell their clients how to spend their own money" the research suggests that some financial planner wisdom could go a long way in helping clients to really derive a bit more happiness from their money. And of course, the guidance is equally relevant to advisors who may be looking for a little more happiness around their own money, too! 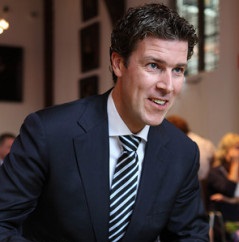 Ronald Sier is a financial planner from the Netherlands. Ronald is a believer in the importance of blending the left-brain and right-brain functions for the most effective delivery of financial planning, and that planners can be more successful in the changing future when using their right-brain potential such as storytelling capabilities. Ronald publishes the See Beyond Numbers blog, and you can find him on Twitter at @Ronald_Sier.

Some things are so common, that you think it’s true without even thinking it might not be. The Beatles sang “Money Can’t Buy Me Love”. And that’s true, probably.

But what if there is scientifical evidence that money CAN buy you happiness?

Two academics and authors of Happy Money, Elizabeth Dunn and Michael Norton use an array of behavioural research to show that the most rewarding ways to spend money can be counterintuitive. Fantasies of great wealth often involve visions of fancy cars and palatial homes on remote bluffs. Yet satisfaction with these material purchases wears off fairly quickly. What was once exciting and new becomes old-hat; remorse creeps in.

It is far better to spend money on experiences, say Ms. Dunn and Mr. Norton, like interesting trips, unique meals or even going to the cinema.

These purchases often become more valuable with time—as stories or memories—particularly if they involve feeling more connected to others.

How can financial planners use this wisdom of these fine authors and researchers?

Here are 6 little known and surprising ways how people CAN buy happiness:

1) Spend Money On Others, Not Yourself

In a groundbreaking set of studies, University of British Columbia professor Elizabeth Dunn and her collaborators set out to test the notion that money can buy happiness, but only if it’s spent pro-socially— that is, when we invest in others, rather than in ourselves.

Here’s one experiment. On a summer morning in Vancouver passersby were approached with a box of envelopes, and an unusual request. People were asked how happy they were, got their phone number, and then were handed a mysterious envelope. When people opened the envelope, they found a $5 or $20 bill, accompanied by a simple note. For some of them the note instructed:

Others found a note that read:

That evening, they received a call asking them how happy they were feeling, as well as how they had spent the money. It turned out that individuals who spent money on others were measurably happier than those who spent money on themselves. Even though there where no differences between the two groups at the beginning of the day.

It also turned out that the amount of money people found in their envelopes ($5 or $20) had no effect on their happiness. How people spent the money mattered much more than how much of it they got.

2) Spend Money To Give You Time

Researchers asked participants to record everything they did for a whole day. Comparing recent time diaries to similar diaries from earlier decades revealed that people spend about four hours more per week engaging in leisure than they did in the 1960s. It turned out that our sense that we have less free time now than people did in earlier decades may be largely an illusion.

A more likely culprit behind the perceived time famine in modern life is financial prosperity. While wealthier people report feeling more pressed for time, simply feeling like your time is valuable can make it seem scarce.

Why? Scarcity increases value. And conversely, when something is valuable, it is typically perceived to be scarce. As time becomes worth more money, people see that time as increasingly scarce.

Yet, people who feel they have plenty of free time are more likely to exercise, do volunteer work, and participate in other activities that are linked to increase happiness. For example, connecting with friends, nurturing intimate relationships, consuming art, music, and literature, learning new languages and skills, honing talents. Tellingly, these are precisely the activities that people on the brink of death, like mountaineers caught in a blizzard on Mount Everest, wish they would have spent more time doing in their everyday lives.

Although money can be used to buy free time, in part by outsourcing the demands of a daily life such as cooking, cleaning, and even grocery shopping, wealthier individuals report elevated levels of time pressure.

The critical issue is how people consume the extra time they buy.

If, instead of doing something meaningful, engaging, fruitful, or growth-promoting, people fritter the hours away by mindlessly watching television shows, obsessing over looks or gadgets, or drifting aimlessly from one undertaking to the next, then happiness will surely not come from riches.

Here lies a challenge for financial planners. Can you unfold the secret of how your clients want to feel and create a service that’s build to make your clients feel great?

3) Spend Money Now But Wait To Enjoy It

For example, a month before embarking on a guided twelve-day tour of several European cities, eager travelers report expecting to enjoy their trip significantly more than they actually do during the twelve days.

Identical results are found when students are surveyed about their expectations three days before their Thanksgiving vacation, and when midwesterners were surveyed three weeks before a bicycle trip across California.

Indeed, researchers who studied a thousand Dutch vacationers concluded that by far the greatest amount of happiness extracted from the vacation is derived from the anticipation period, a finding that suggests that we should not only prolong that period, but aim to take several small vacations rather than one mega-vacation.

4) Spend Money On Experiences Rather Than Possessions

Growing evidence reveals that it is experiences— not things— that make you happy.

Many experiences, such as hikes with friends or family game nights, are virtually free. And many others — road trips, boozy dinners, sports tournaments, cooking lessons, and rock concerts — cost money…

In sum, the research on the superiority of experiences over possessions is hugely persuasive, and all of us — but especially those of us with meager budgets — would do well to apply its recommendations.

However, it’s important to remember that material things can also make us happy — as long as we turn them into experiences.

We could take along our family and friends in an adventure in our new car; we could throw a party on our new deck; and we could practice a self-improvement program on our new smartphone.

A researcher, for example, interviewed people of all income levels in the United Kingdom and found that those who frequently treated themselves to low-cost indulgences — picnics, extravagant cups of coffee, and treasured DVDs — were more satisfied with their lives.

Other scientists have found that no-cost or low-cost activities can yield small boosts to happiness in the short term that accumulate, one step at a time, to produce a large impact on happiness in the long term.

If money isn’t making your client happy, it’s likely because your client is spending it to keep up with the neighbors, validate his wealth, or flaunt his looks, power, and status.

The problem, then, isn’t in the money but in how your client uses it.

Perhaps the most direct and most reliable way to maximize the happiness and fulfillment that we can extract from money is through need-satisfying pursuits— for example, by spending capital on developing ourselves as people, on growing, and on investing in interpersonal connections.

In other words, the purchases or expenses that will yield the greatest emotional benefit are those that involve goals that satisfy at least one of the three basic human needs:

2) relatedness (belonging and feeling connected to others)

Financial planners can fulfill the needs of their clients by acting on this.

1) Give compliments to your clients about his accomplishments

3) It seems like this need is made for the financial planner. Make your client feel in control of their finances. That shouldn’t be hard. It’s what we do for a living!

Such activities have been shown by researchers to bring happiness and, equally important, not to stimulate ever-increasing addiction-like desires for more and more.

To motivate each other, I believe it would be highly inspiring to answer the following question (please leave your responses in the comments below!):

What do you do to make your clients happy?

A version of this article originally appeared on the See Beyond Numbers blog on September 5th, 2013.