The inspiration for today’s blog post was a recent column by Reuters personal finance writer Linda Stern, looking at the current marketplace for variable annuities with living benefit riders. The article notes two of the most common concerns regarding variable annuity guarantees: they are too expensive, and there’s too much risk about whether the companies will be able to pay on those guarantees when the time comes. 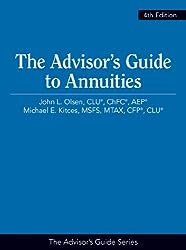 These concerns are familiar ones. During research for the latest update to my book “The Advisor’s Guide to Annuities” I heard many financial planners express similar worries about the high cost of variable annuity guarantees, along with fears that the annuity companies may not be able to make good on their guarantees down the road.

There’s just one problem: it’s actually impossible for annuities to be too expensive and too risky!

What Does It Mean When Annuity Guarantees Are Too Risky?

In the case life insurance death benefits, the actuarial process is relatively straightforward – with a large enough number of people, the frequency of death for a group of individuals is quite easy to predict, and the companies simply pool together a large number of insureds, and let the math work for them. For instance, if 100,000 people own life insurance, it’s fairly easy to predict the amount of money that will be paid out in death benefits every year; although it’s difficult to know if any one person will pass away or not, on average the people who are still alive (and still paying premiums) support the people who died (and need to receive a death benefit), and thanks to the so-called “law of large numbers” the results average out quite reliably. Thus, in the aggregate, the insurer gathers money in the form of premiums from those who are alive each year, invests it, subtracts a small amount for expenses and the profit margins of the insurer, and pays out the remainder as a series of death benefits as people die (predictably from large numbers) each year. If mortality or investment experience are slightly better than anticipated (or expenses are lower), there is a little more money left over at the end of the year, and the insurer shows a greater profit; similarly, if investment or mortality (or expense) results are unfavorable, profits are lower. The process of annuitization operates the exact same way, but in reverse; instead of collecting premiums during life and making a payment at death, payments are made during life and cease at death.
Unlike traditional immediate annuities or even life insurance, variable annuities income guarantees do not simply operate by pooling risk and letting the law of large numbers work for them, because the relevance of the variable annuity guarantees is determined by unpredictable market fluctuations, not large-numbers-predictable mortality. Although it is true that the death of a variable annuity owner lets the company “off the hook” for future income guarantees, the company is only “on the hook” if the market performs poorly, causing the guarantees to be relied upon. But because all annuitants may be invested substantively the same, the numbers don’t just average out en masse. In fact, a significant market decline is likely to simultaneously put the insurance company at risk for income guarantee payments to nearly all annuity owners at once; similarly, a strong market rally simultaneously relieves the insurance company of its obligations to most of its annuity owners at the same time.
Because the risk isn’t simply pooled – where those who live a long time support the benefits for those who die early, or vice versa – the insurance company has to manage its risk by charging a separate expense fee for the privilege of the income guarantee. If the insurance company sets an appropriate price, the ongoing reserves generated by the fees accumulate sufficiently to pay the income guarantees if/when/as they come due. If the pricing is wrong, however, then the annuity owners are at risk, as the insurance company doesn’t have enough money to pay the guarantee obligations.

What Does It Mean When Annuity Guarantees Are Too Expensive?

As noted earlier, in order to pay out annuity income (and other) guarantees, annuities must charge a fee, and often the expense can be substantial. In today’s marketplace, it’s not uncommon for annuities to have total Mortality & Expense and other income guarantee rider fees of 2% to 3% per year, before adding in the costs of the underlying investment subaccounts (roughly analogous to mutual fund fees). This is a striking total cost in a world where index mutual funds and ETFs can often be had for less than 0.20% of expenses, and even more actively managed funds might only carry a 0.75% to 1.5% expense ratio.

Of course, it’s a bit apples-to-oranges to compare mutual fund or ETF fees to the expenses of a variable annuity on a head-to-head basis, because they don’t really provide the same thing. The cost of mutual funds or ETFs simply provides access to an investment (and, perhaps, an active investment manager); variable annuities expenses, on the other hand, pay for guarantees regarding death and/or income benefits that traditional investments simply don’t offer. So it should not be surprising that separate, additional guarantees entail a separate, additional cost.
Nonetheless, anchored to the typical expenses associated with standalone investments, the cost of variable annuity guarantees often ‘feels’ high, in a world where the expenses of the latter could literally double or triple (or more!) the cost of a mutual fund or ETF. As a result, notwithstanding the fact that the offerings aren’t quite the same, the variable annuity is often perceived to have a “too high” and therefore unreasonable cost, implying that the annuity company (and perhaps the annuity agent as well) must be unjustly enriched by excessive expenses.

The Problem With Too Expense And Too Risky

So far, the criticisms of annuities seem relatively straightforward. The insurance companies are heavily reliant on making accurate estimates of the cost of the income guarantees that they provide; failure to estimate these costs accurately could mean, in the face of a severe bear market where suddenly the income guarantees become ‘in the money’ for almost all policyowners at once, that the annuity company simply will be unable to pay on its promises. Similarly, at a cost that may be 2 to 3 times (or more!?) the expense of a standalone mutual fund or ETF, it’s hard for many to rationalize the expense of variable annuity guarantees, even if the head-to-head comparison with traditional investments is a bit apples-to-oranges.

The fundamental problem, however, is that almost by definition, if the annuity’s expenses and fees are “too expensive”, the company should be raking in profits hand over fist… which means it should be so wildly profitable that it cannot possibly be at risk for failing to pay on its guarantees! After all, an annuity being too expense implies that the costs too high relative to the benefits that are offered, which directly contravenes the “riskiness” of annuity company guarantees which emerge when the company doesn’t charge enough for what it offers to policy owners!
Viewed conversely, if the greatest concern for a variable annuity owner is that the company may not be able to make good on its income or death benefit guarantees, the implicit suggestion is that the company needs to raise its expenses to bring in more money to ensure that it can pay its contractual obligations. Which means if the greatest fear is that the annuity company might be at risk for failing to pay on its income guarantees, the company should be raising its fees further to compensate, because the current expenses would be too low!

So how do we account for the common viewpoint that variable annuity guarantees are both too expensive and too risky, when in reality too much of one by definition means the opposite cannot be true as well? The culprit appears to be a combination of behavioral finance biases: bad anchors, and an excessive focus on recent (and short) time horizons.
The bad anchor problem is that, even though we may acknowledge the comparison is apples-to-oranges, we are still judging the cost of annuities with guarantees by contrasting them with investment alternatives that don’t have those guarantees, such as variable annuities versus traditional mutual funds and ETFs. Sure, compared to an index fund with a cost of less than 0.20%, the cost of a 2%+ annuity seems quite high. Yet when readjusted to the proper anchor – is the fee appropriate for the guarantees provided, the irony is that a large number of investors and planners actually seem to think the fee is too low, such that the annuity company is at risk and might not be able to make good on its contractual obligations! Which means, simply put, the appropriateness of the fee really needs to be judged relative to the annuity guarantees provided, and not referenced back to non-guaranteed alternatives; when we use the right anchor, sometimes we come to the opposite conclusion!
The short time horizon problem is the tendency to extrapolate whatever is going on recently into the indefinite future, and making decisions accordingly. Thus, as markets swing from bull to bear, annuities are varyingly judged to be too expensive (during a bull market when the declines that the annuity is protecting against seem remote, suggesting the fee is too expensive) or that the guarantee is too risky (during a bear market when the declines that the annuity is protecting against are so salient, it creates worry that the annuity company will not withstand the shock). In reality, the cost of the annuity should really be judged against the entire market cycle of bull and bear markets (at least, unless the investor is specifically trying to time the annuity purchase to the market cycle and buy in when the guarantee is undervalued), not just whether the market is in the midst of a short-term bull or bear cycle.
In any event, the bottom line is that annuities cannot simultaneously be too expensive and too cheap and underpriced; it’s either one or the other. As long as we compare them to inappropriate anchors and/or over unreasonably short (or recent) time horizons, though, we run the risk of coming up with these mutually exclusive conclusions and making poor decisions as a result. To make a proper decision, it’s crucial to really evaluate the value of the guarantees relative to what those guarantees provide – which ensures they’re not being evaluated in an apples-to-oranges comparison – and over a reasonable time horizon that acknowledges both the up and down cycles of the market.
So what do you think? Do you believe variable annuity guarantees are too expensive? Or that the companies are at risk and therefore that the annuities are too cheap and should have higher fees? How do you evaluate the costs of variable annuity guarantees? Over what time horizon? Do you have the same perspective on variable annuity guarantees and costs as your clients?

Who Not How: The Formula to Achieve Bigger Goals Through Accelerating Teamwork