In recent years, it has been increasingly popular to lament the lack of career tracks at most financial planning firms, especially as financial planning struggles in the aggregate to attract enough new advisors to fill the shoes of those likely to retire in the coming decade.

Yet for all the furor about the need for career tracks, relatively few firms have established them so far, and the ones that have tend to be the largest of the advisory firms. Yet indirectly, that perhaps is the point - it takes a certain size and scale to be able to craft a career track in the first place, and most firms are simply not large enough to do so.

Of course, that doesn't mean there are no opportunities in financial planning. For the subset of firms that are enjoying some healthy growth - where 15% compound growth rates double the firm every 5 years - there are an ever-growing array of opportunities available.

Nonetheless, what this suggests is that as long as most advisory firms are small, trying to create fully fleshed out career tracks may be unrealistic anyway. Instead, the real focus should be on firms that are growing, which may increasingly become an imperative for those practices that want to attract and retain the top talent, and the new question for new planners should shift away from "what is the career track at this firm" to instead focus on "what are this firm's plans for growth" instead.

What Is The Financial Advisor Career Track?

For instance, most large law and accounting firms have a fairly consistent progression opportunity from junior associate to senior associate to junior partner to senior partner. The track may span a decade or more, and because there are certain requirements delineated - from various core technical knowledge competencies to management skills to business development expectations - not everyone necessarily progresses to the end point on the track. Nonetheless, by establishing the career track and expressing it up front, prospective employees - or those merely considering the profession in the first place - know what to expect, and can choose and plan their careers accordingly.

In the financial planning world, the career path is still not fully matured; at many/most firms, there is no clearly defined career track at all. In point of fact, for much of its history, the "career path" for financial advisors was really the same in year 1 as it was in years 5, 10, or 20 - get clients, serve clients. Financial success was simply based on the quantity and wealth of clients served. The more clients the advisor could successfully attract and retain, the greater the income and "career" potential.

In recent years, as advisory firms have gotten larger, a career track - similar to law and accounting firms - has slowly begun to evolve, from a junior paraplanner to an associate advisor to a lead advisor and eventually becoming a partner. As a result, there has been a significant rise over the past decade in the number of "employee advisors" who fill out such career tracks. 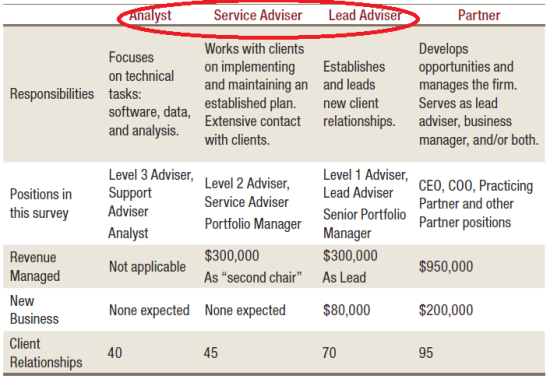 While it's nice to work at a "large" firm that has a well established career track, the reality by numbers is that the overwhelming majority of financial advisory firms are still very small businesses, either sole proprietorships or perhaps a handful of "partners" sharing some overhead/infrastructure but still functionally operating as independent silos. Even with as much growth as has occurred over the past decade, according to the 2013 InvestmentNews/Moss Adams Staffing Study, the median firm "merely" went from a total of 3 employees to 7. In such firms, there's simply not enough "depth" to have a career track in the first place; you can't have a fully fleshed out career track when the only tiers of employees are "secretary" and "owner"! (And notably, many believe the Moss Adams surveys have a "bias" towards large firms and that there their estimates of the median firm may be high relative to the industry at large!)

Nonetheless, the lack of career tracks at most firms doesn't mean there's no opportunity at such firms, though. Instead, it simply means the reality is that if a career track is going to become available, it can/will only come if the firm itself is growing to the point that such opportunities make themselves available. In other words, a growing firm can organically grow its own career track over time; as the firm gets larger, more clients come on board, the roles within the firm specialize and focus, and new jobs are created to service and manage the growing client base. If the firm is truly growing, the deepening career track is inevitable, as technology and efficiencies can only go so far before a growing business has to hire with increasing levels of responsibility.

Thus, for those looking for a financial planning job and career track, this boils down to one simple rule:

You can't grow a financial planning career at an advisory firm that isn't growing.

If the financial planning firm is not continuing to grow and take on new clients, the best case scenario is that a job at the firm will merely be a stepping stone to a new (hopefully greater) opportunity. Otherwise, a natural "ceiling" will emerge in the career progression, possibly at a very early point in the career; after all, if the firm isn't growing, then the owner may have little need to delegate and assign greater responsibilities over time, and there will be little incentive to allow for growing compensation as, when the pie isn't growing, every one dollar of additional income for an employee results directly in one dollar less of income for the owner!

Can Firms Hire Financial Advisors If They're Not Growing?

Does this mean that firms which aren't growing can't/shouldn't hire (new) financial planners as well, or that new planners should avoid such firms? Not at all. But it is important to recognize that if the firm isn't growing, the position being hired for today isn't likely to evolve into something new or greater in the future; instead, it's likely to remain exactly as it is today. For someone looking for that kind of "job stability" that may not be a bad thing; but for an ambitious new planner, it's virtually certain to lead to job turnover.

Accordingly, firm owners in lifestyle practices should be cautious about hiring ambitious young planners if the firm is not growing enough to support new future job opportunities for those young planners. That doesn't mean it's a bad idea to hire. But hiring should be into job positions with concrete, clearly defined job responsibilities and tasks that can be easily and repeatably trained (first job for new employee: write procedures manual for future replacement!). Ultimately, firms can be profitable even if they are functioning as a "stepping stone" for new planners who will eventually move on to greater opportunities at new firms down the road... but only if they are structured and prepared for the inevitable turnover that will occur!

While a small but growing firm can evolve a very positive career track for a new financial planner, there's an unfortunate caveat: the owner of the firm still has no idea what that career track is going to be.

After all, the reality is that when a firm is growing, it's difficult to project more than a few years in advance. For firms that are growing at a healthy 15% pace, with compounding the entire business will double every 5 years, creating a tremendous amount of opportunity but a huge amount of uncertainty as well. Frankly, a wise business owner should be deliberately cautious not to overcommit to a particular career track if the reality is that the firm is doubling every 5 years! Accordingly, the reality is that at even the rapidly growing firms that may turn out to have some of the best career tracks, the answer to the question "What is the career track at this firm?" is "I honestly have no idea, but as long as this firm continues to grow, there will be plenty of opportunity."

In turn, what this really means is that for most new financial planners looking for a great financial planning opportunity, joining one of the few big firms with established career tracks can lead to a very nice long-term career, but the "best" career tracks are perhaps likely to come from the firms that are too small to have a career track and are growing and evolving too quickly to have any idea how to craft one (though there are some services out there available to help figure this out). From the opposite side, what we see in our recruiting business as well is that the best hires tend to make their own career paths anyway!

In any event, though, the reality is that for most firms, those looking for a job are unlikely to find a career track anytime soon; the firms are either too small and not growing enough to have a career track, or they're growing so rapidly they won't have any idea what it's going to look like anyway!

Which means in the end, for financial planning firms who want to attract - and retain - the top talent, growth is an imperative. And for new financial planners, if you're really concerned about your opportunities for career growth, the real question to ask is not "what is your firm's career track" (knowing they probably won't have one anyway) but instead "how much is this firm growing" so you can feel confident that opportunities will abound in the future.