The inspiration for today's blog post is a recent new research paper entitled "Individual Financial Risk Tolerance and the Global Financial Crisis" by Australian academics Paul Gerrans, Robert Faff, and Neil Hartnett. The authors looked at the financial risk tolerances of 4,741 investors before and after the global financial crisis in late 2008, using global investor data available from FinaMetrica, arguably the world's leading (and most rigorous and scientifically validated!) risk tolerance assessment tool.

To assess whether risk tolerance changed as a result of the financial crisis, the authors controlled extensively for other demographic details, from gender to wealth to income to education, all of which have been separately shown to have some impact on financial risk tolerance. This narrowed their data set down to 3,368 investors who were tested both before and after the financial crisis with complete (and controlled for) demographic data.

The results of the study found that technically, a miniscule but statistically significant decline in risk tolerance did occur through the financial crisis, but the change was so small that it would not likely lead to any observable difference in behavior and was effectively "stable" over time. This is consistent with other research done using FinaMetrica data, and FinaMetrica's own analysis and review (shown below) that despite volatility of the world markets over the past 12 years, average risk tolerance has remained stable. The very slight downward trend visible in the data is due primarily to the addition of US investors (in 2002) and UK investors (in 2004), who in the aggregate tend to be slightly less risk tolerant than the Australian investors that dominate the early years of data, and consequently bias the average downwards as more of them are included in the total. (Notably, separate research has shown that as investors age, their risk tolerance also declines slightly, and that major life events can affect risk tolerance as well, so an aging sample of investors through the financial crisis would be expected to show a slight downward trend over time.) 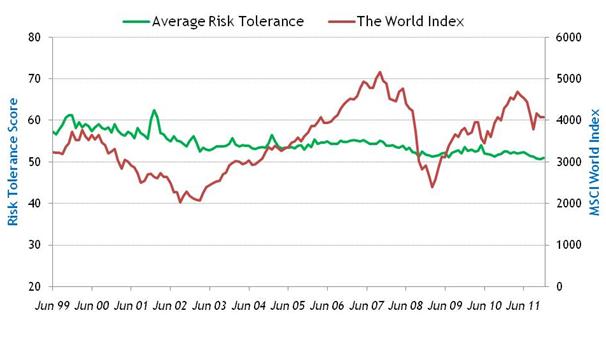 To say the least, though, there appears to be no apparent correlation between the trend in risk tolerance and the trend in the world index through the 2002 and 2008 bear markets, or their subsequent recoveries.

For many planners, the idea that risk tolerance is a stable trait appears to defy the personal experience of working with clients who materially change their portfolios in the face of volatile markets. "If risk tolerance is stable," they argue, "why can't clients stick with their investments?"

The simple answer is that the trait of risk tolerance is not the only factor that affects investor behavior. Instead, investors are ultimately driven by two factors: their risk tolerance, and their risk perception. Risk tolerance determines whether the client is willing to take a specified risk in pursuit of a potential reward. Risk perception is the client's subjective evaluation of whether a particular investment is consistent with that risk tolerance.

For instance, imagine a client whose risk tolerance indicates that it is acceptable to invest in a portfolio that may decline as much as 20%, in order to pursue a long-term return that is 2% higher than a more conservative alternative. In theory, any and every investment that meets this trade-off - can generate a 2% higher return, and is unlikely to decline more than 20% - should be appealing to the investor.

But now let's assume that we're in the middle of a bear market, and the investment in question has just declined 15%. As the behavioral finance research has shown, we have an irrational tendency to overweight what has happened recently, and project it into the indefinite future. As a result, the investor might choose to sell the investment that has declined - not because it violated the client's 20% decline risk tolerance threshold, but because the client's perception is that the current 15% decline might just be the first step of a 25%, 35%, 50%, or 100% loss! In other words, the client perceives the investment to have become intolerable, not because the tolerance changed, but because the perception of risk changed.

In a similar manner, clients in the midst of a bull market tend to be remarkably willing to invest in "riskier" assets. The common assumption is that clients are more tolerant of risk when markets are performing well, but the Gerrans research shown here reveals that is not the case. Instead, the real problem is that when markets are rising and clients provide undue focus to only recent events, clients begin to form the assumption that such investments will always and only go up. Accordingly, even the "riskiest" of investments don't appear to be risky at all, and the investor buys them... again, not because the tolerance for risk increased, but because the perception of risk decreased.

In a world where risk tolerance is stable but risk perception varies, the real challenge of difficult clients is in managing their fluctuating risk (mis-)perceptions. If views of risk and expectations are not anchored properly, the client's potential misperceptions of risk - especially because of the prevalence of the recency bias - can lead to wildly inappropriate investment decisions and a greed-fear buy-sell cycle.

The bottom line is that this latest research puts another nail into the coffin burying the idea that risk tolerance fluctuates up and down with the vicissitudes of the market (adding to the body of research on the topic that FinaMetrica summarizes here). The research reveals that instead, client risk tolerance is actually stable - and can be measured effectively with the right tools - and that what advisors and their clients must focus on the most is risk perception. Accordingly, best practices should include evaluating risk tolerance, designing a portfolio consistent with that risk tolerance, and then providing the ongoing communication necessary to ensure the client continues to correctly perceive the risk of that portfolio, fighting the natural tendencies to over- and under-estimate the risk over time.