In recent years, the Financial Planning Coalition - comprised of representatives from the CFP Board, NAPFA, and the FPA - have been advocating together for a fiduciary standard in the delivery of financial services. Success, thus far, has been limited - their efforts for financial planning fiduciary regulation to be integrated into the Dodd-Frank legislation led to some mandated studies that do something to move the conversation forward, but the follow-up fiduciary standard that was to be implemented pursuant to those studies continues to lag. In the meantime, the Dodd-Frank results certainly fell far short of bona fide recognition of financial planning as a standalone profession.

Yet at the same time, the Certified Financial Planner designation continues to expand its base at the grass roots level, even while the total number of participants in financial services remains flat (or declining slightly) over the past decade.

Which raises the question: As an increasing number of financial advisors become CFP certificants voluntarily, is the CFP Board winning the fiduciary fight already, from the inside out?

The inspiration for today's blog post comes from two recent bits of data I saw recently in the industry press. The first, from a recent Cerulli study, shows the demographics for financial advisors in various financial services industry channels. As the chart below indicates, the financial advisor population in the aggregate has been stagnant - actually, declining slightly - for almost a decade now. Fiduciary advocates point out that the RIA base has grown nearly 30% in the past 7 years (albeit from a low base of only 15,786), although relative to a total population of 320,378 financial advisors, the progress is slow. 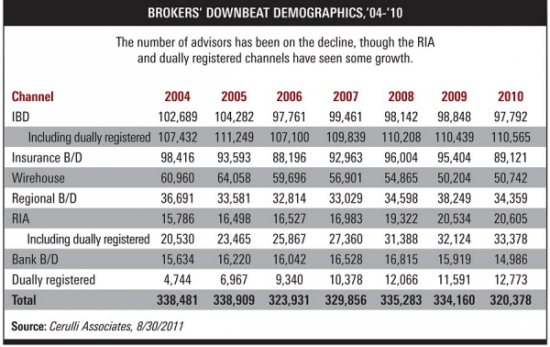 Yet a second recent data point provides a striking contrast - this past weekend witnessed the largest number of test-takers ever sitting for the CFP exam (a whopping 4,281!), as the total CFP certificant population is poised to break 64,000 through the end of this year. Putting these numbers together and a striking trend emerges - major players in the industry may be fighting back against the fiduciary standard from the top, but the CFP Board is already converting advisors from the bottom up, one at a time, but in numbers that are really adding up. The chart below juxtaposes data from the CFP Board about the number of active CFP certificants since 2004 (right scale) against the Cerulli data for the number of financial advisors (left scale). 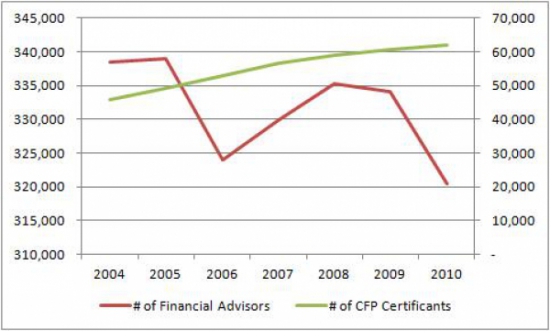 And given the CFP Board's change to the Standards of Professional Conduct in 2007 to require the fiduciary application of advice to those providing material elements of financial planning, the now-nearly-20% of financial advisors committed to the CFP marks are generally already practicing fiduciaries, whether their government regulator requires it or not. And perhaps even more notably, they have been trained in a process for delivering fiduciary, client-centric advice, which may contribute even more to behavior change than the mere threat of a different legal standard in situations gone wrong.

If the trends merely continue at their current pace, we will have gone from approximately 1-in-8 financial advisors with a CFP mark in 2004, to 1-in-5 in 2011, down to 1-in-3 by the end of the current decade. Granted, the latter is still a minority, but one that will be material enough it clearly can no longer be ignored. And given some of the CFP Board's recent survey results regarding the relative financial success of CFP certificants - with a median income of almost $150,000/year - there is some implication that even if CFP certificants are still a minority by headcount the end of the decade, they could be a majority in terms of the breadth of clients reached, the size of practices, the amount of assets overseen, etc.

To me, all of this data raises some interesting questions. First of all, even if top-down advocacy efforts continue to flounder, could we reach the point within 10 years where so many of the most successful advisors already adhere to a fiduciary standard and have a fiduciary (financial-planning-based) client process anyway, that it's a fait accompli that a true fiduciary standard will follow, built from the ground up? With the rise of hybrid RIAs, and broker-dealers gradually shifting towards fee-based compensation anyway, at some point even wirehouses will be close enough to a fiduciary business model that one or more will "break ranks" with the rest, as implementing a fiduciary rule will no longer be so disruptive to them and advocating for fiduciary will give them competitive leverage over the product-centric laggards.

And second, does that mean that in the foreseeable future, one of the best ways for industry associations like FPA and NAPFA to advance the practice of fiduciary financial planning is not merely to Coalition with the CFP Board to lobby in Washington, but also to more proactively throw their own weight behind trying to support and grow the CFP marks and the CFP Board's efforts in a more CFP-centric fashion within the financial advisor community?

In short, notwithstanding the controversies they go through from time to time, and the CFP Board's well-known tendency to watch out for its marks first and everything else second, could the CFP Board nonetheless actually be achieving P. Kemp Fain Jr.'s vision of "One Profession, One Designation" for the entire industry of financial advice?