While the American Taxpayer Relief Act of 2012 (ATRA) finally ended more than a decade of "temporary" Alternative Minimum Tax (AMT) patches and fixes that kept expiring and had to be renewed, the ultimate resolution of ATRA was not permanent repeal of the AMT. Instead, ATRA provided permanent "relief" by merely locking in the latest AMT exemptions from 2011, and adjusting the exemption - and everything else under the AMT system - for inflation going forward.

As a result, high-income individuals continue to be potentially exposed to the AMT, depending on exactly what their income levels may be, and the AMT adjustments and preference items that have to be added back to income for AMT purposes. Fortunately, though, a client's AMT exposure can actually be quickly evaluated by looking at a chart that maps income after deductions, and the amount of deductions that are lost for AMT purposes, to figure out what combinations of income and lost deductions will result in an AMT liability.

Notably, though, being exposed to the AMT is not always a "bad" outcome. In fact, because the top AMT tax rate is "only" 28%, in some cases high income individuals will actually want to accelerate more income into an AMT year. In an AMT environment, the primary planning opportunity is actually to manage income around the AMT "bump zone" - that span of income where the AMT exemption is phased out, temporarily boosting AMT rates (and capital gains rates!) by an extra 7%. For those below the AMT bump zone, the goal is to spread out income to stay below the zone. But for those above the AMT bump zone, it turns out the best strategy to reduce the long-term bite of the AMT may actually be to pay even more in taxes!

What Is The AMT?

Conceptually, the Alternative Minimum Tax (AMT) is actually a remarkably simple tax system: add up all your income, subtract relative few deductions, deduct one large “AMT exemption” (to make up for all the other deductions that aren’t available, but phased out at higher income levels), and apply a nearly-flat-tax rate of 26% on the first $175,000 and 28% on the remainder. Ironically, viewed from this perspective, the AMT is actually simpler than the regular tax system, as it has fewer deductions, fewer phaseouts, and fewer tax brackets!

Under the AMT system, the couple simply deducts their $5,000 of charitable contributions and $15,000 of acquisition mortgage interest, subtracts their $82,100 AMT exemption, finishing with $72,900 of net income, which at a 26% tax rate has a total "tentative minimum tax" liability under the AMT system of $18,954.

Since the AMT liability is $18,954 and the regular tax liability is only $18,275, the couple will owe an additional $679 of taxes due to the AMT. And while the comparison itself is somewhat complex, the reality is that the actual calculation of the AMT was rather simple; it was simply total income, minus the charitable contributions, mortgage interest, and a simple exemption, with the remaining income taxed at a single flat 26% rate.

Of course, in practice the AMT is incredibly messy to calculate, because we don’t actually start with the relative simple process indicated above. Instead, we go through the entire process of calculating tax exposure under the regular system, then “unwind” various AMT adjustments and preference items, then re-apply a new AMT exemption (to the extent not phased out), and calculate a tax liability on the remainder left over.

Given that the AMT system only applies in situations where it will produce a greater tax liability than the regular tax system (taxpayers pay based on whichever produces the larger tax bill), evaluating AMT exposure is essentially an exercise in determining whether there are enough “add-backs” such that, after subtracting the available AMT exemption and using the AMT rates, the taxes due under the AMT system are greater than the existing regular tax liability. Accordingly, by knowing someone’s regular taxable income after all deductions, we can also know their regular tax liability, and figure out exactly what portion of their deductions would have to be AMT adjustments and preference items to trigger AMT exposure.

Accordingly, the chart below shows, for 2014, the exact amount of AMT adjustments and preference items that will result in AMT exposure. For a given level of income (based on regular taxable income after all deductions), if we go through the list of deductions/exemptions that were claimed, and they add up to something greater than the amount shown in the table, there will be some exposure to the AMT. For instance, if a couple’s income after all deductions is $200,000, and those deductions included $20,000 of state income taxes, $8,000 of personal exemptions, and $4,000 of real estate taxes, the total is $32,000, and the couple will end out with paying some AMT (because $32,000 is greater than $30,048).

While in its early years, AMT exposure was typically triggered by aggressive or esoteric tax shelters, in today’s environment the AMT is usually triggered by relatively common and ‘mundane’ tax deductions, including state income taxes, real estate taxes, a large number of personal exemptions for large families, and high miscellaneous itemized deductions (including, for many advisors, their own investment management fees!). As the chart above shows, for a couple with $300,000 of taxable income after all deductions, with two personal exemptions worth $7,900 (simply for being a married couple), it takes only $13,521 of additional AMT adjustments to trigger the AMT… which means, in essence, that it will be impossible for them to avoid the AMT in any state with a tax rate more than 4.5%, as just the two exemptions as a married couple and the state taxes they must pay are alone enough to trigger the AMT!

On the other hand, ironically the recent changes under the American Taxpayer Relief Act of 2012, which brought back the so-called “Pease” and PEP” phaseout rules (on itemzed deductions and personal exemptions, respectively), end out reducing individual exposure to the AMT at higher income levels. As those phaseouts effectively increase the individual’s regular income tax brackets and make their regular tax liability larger, to the extent that there is a bigger regular tax liability and fewer exemptions and deductions, the phaseouts result in higher income taxpayers ending out being less subject to the AMT (albeit only by paying more in the regular system in the first place).

Under the regular tax system, good tax planning is relatively straightforward – since tax brackets just rise as income increases, the goal is to defer income when income is high (and the tax brackets will be high), and accelerate income when income is low (e.g., harvest it in the form of capital gains or Roth conversions, to avoid having too much income that drives the client into higher brackets in the future).

With the AMT, though, planning is different. In the case of the AMT, the system is a (relatively) flat tax system with only two brackets of 26% and 28%. Accelerating income isn’t necessarily helpful, and deferring income isn’t necessarily harmful, as the tax rates hardly vary anyway. However, one important nuance of the AMT system is that, as income rises, the large AMT exemption that “everyone” gets is itself phased out. Once the phaseout threshold is reached (at $117,300 for individuals and $156,500 for married couples, indexed annually for inflation), every additional $1 of income also phases out $0.25 of the exemption, which at a 26% - 28% tax rate is actually the equivalent of a 6.5% - 7.0% “surtax”.

As a result, taxpayers who are phasing out their AMT exemption actually face a “bump zone” of tax rates, as their AMT marginal tax rate jumps up to 32.5% and then 35%, before ultimately falling “back” down to 28% once the AMT exemption is fully phased out! Theses AMT bump zones are illustrated below for individuals and married couples. 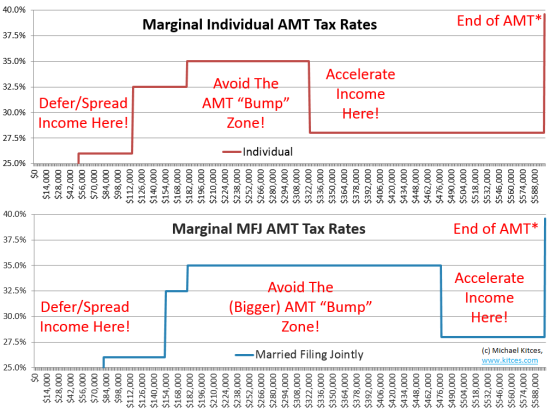 *End of AMT depends on exact combination of income and AMT-related deductions and may vary higher or lower from one individual/couple to the next.

Given this unusual “bump” in marginal tax rates in the middle, AMT tax planning takes on a rather unique approach – simply put, the goal is to “avoid the bump” to the extent possible. If income is low, this means the best approach is to spread out or defer income, stay below the bump zone. However, if income is high, the best approach may actually be to accelerate income to avoid the bump zone in the future, since the top AMT rate remains ‘capped’ at maximum rate of only 28% (and 20% + 3.8% = 23.8% for capital gains at those income levels) once the exemption is phased out. On the other hand, facing the bump zone in the future could be taxed at 32.5% - 35% instead! Which means for many individuals, the best approach to dealing with a “big” income year of $500,000 of income is actually to accelerate and take more income, pushing it up to $700,000 or more at “only” a 28% AMT rate! And notably, the AMT exemption phaseout "surtax" applies for capital gains as well, which are still subject to the usual four capital gains brackets but are also bumped even higher due to the AMT exemption phaseout (e.g., the 15% capital gains rate still applies for AMT purposes, but may be boosted to 21.5% as a result of the AMT exemption phasing out), which means it's also appealing to avoid capital gains in the AMT bump zone and harvest them for those who are above the threshold.

Ultimately, those looking to accelerate income into AMT years past the AMT bump zone should be cautious not to add too much, as eventually income rises so high that adding more income at the regular tax system’s 39.6% rate just pushes the taxpayer back into the regular tax system (and its higher 39.6% marginal tax rate rather than the 28% AMT rate). While this crossover point varies (it depends on just how much in ‘excess’ AMT-adjusted deductions the taxpayer has, as well as his/her state tax rate), the fact remains that for many AMT taxpayers, it turns out that the best way to save on taxes can actually be to deliberately pay more Alternative Minimum Tax, rather than trying to avoid it!