The modern form of retirement – a period of non-work that you can and must enter because you’re no longer able to work – is itself a rather modern phenomenon, and one that ironically became both more feasible and more necessary as life expectancies increased over the past 100 years. Because when coupled to the industrial revolution and the shift from farms to factories, rising longevity became both a business and societal necessity to figure out what to do with the “obsolescent” human beings who couldn’t productively work anymore, but still needed to support themselves!

Yet as life expectancies and medical science continued to advance, we reached the point where retirement wasn’t just a stage of being unable to work, but instead a stage of being able to enjoy a period of non-work leisure. The only requirement was to save and invest enough to be able to afford to not work. Which in turn led to those who tried to reach the threshold earlier and earlier, younger and younger, until the “Financial Independence, Retire Early” (FIRE) movement was born.

But the challenge of trying to “FIRE” out of work as quickly as possible – sometimes as early as one’s 40s or even 30s – is that it leaves a very long time to be in “retirement.” So long, in fact, that the classic “4% rule” of retirement should probably be more like a 3.5% rule (given the extended time horizon). But also so long that most human beings will struggle to be idle for so long… which often leads back to productive engagement that even ends out producing post-retirement employment income. Which ironically means that if many of those accumulating towards FIRE considered this likely income, they might even transition sooner instead! (Because even earning “just” $20,000/year of side income in retirement can reduce nearly $500,000 from the required retirement savings!)

And ironically, despite the focus on accumulating enough assets to FIRE (often as quickly as possible), the real challenge is that while sequence of return is a real risk, it is more often a great boon. In fact, while a 3.5% initial withdrawal rate is necessary for the one worst sequence… 50% of the time, a FIRE retiree at a 3.5% initial withdrawal rate finishes with more than 9X their starting principal left over!

Which suggests the real key, especially for the kinds of extended time horizons that FIRE retirees face, is to develop more flexible spending rules that can adapt to whatever markets (or post-retirement income) may bring. Because while 30-year retirement time horizons have both some upside and downside risk, 40-50+ year time horizons end out with extraordinary upside potential… if only the retiree can weather any potential initial storm. Creating options to ratchet spending higher over time, to create spending “guardrails” to remain in a safe zone, or to segment expenses to ensure the essentials are covered but allow more adaptive lifestyle expenses to creep higher over time (as it will likely be feasible to do!).

In the end, though, the key point is simply to understand that, with extended retirement time horizons under FIRE, it becomes necessary to be more conservative against the potential worst-case scenario, but flexible to the overwhelming number of more positive scenarios likely to occur. Especially when considering that most retirees will struggle to remain “idle” for 40-50+ years (especially when retiring in their early still-productive years). The good news is that more flexible spending rules create many options to still adjust spending dynamically along the way. The problem is simply that they’re arguably the area that most needs to be studied further, to determine spending rules that are both comfortable to manage lifestyle and spending expectations, and really can weather the adverse-returns storm should it happen to come!

END_OF_DOCUMENT_TOKEN_TO_BE_REPLACED 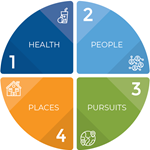 With the ongoing commoditization of asset-allocated portfolios, there is an increasing focus on adding value to clients outside of the portfolio itself… which, in the context of the retirees that most financial advisors serve, means going beyond just retirement portfolio management and liquidation strategies. For many advisors, the starting point has been obtaining a deeper expertise in areas like Social Security timing and Medicare planning during Open Enrollment, and perhaps a more holistic view of planning for and managing health care costs in retirement. Arguably, though, perhaps the biggest area in which financial advisors can add value for retirees is not merely in the technical areas of planning, but in helping them make the life transition to retirement itself, and figure out how to live happy and fulfilled lives in retirement itself.

In this guest post, former actuary and Mercer retirement consultant, Anna Rappaport, shares her own perspective on retirement, the value that financial advisors can add and the “real” areas of concerns for retirees, as someone who has both consulted and studied the issue extensively… and is actually living it as a part of her own phased retirement for nearly 15 years.

As Anna finds that, in practice, the key to retirement well-being is to have a balanced “life portfolio” where the retiree focuses on 4 key areas: Health (and the activities to maintain and support health); People (family, friends, community organizations, and the ability to create new contacts as needed); Pursuits (work, volunteering, hobbies, community activities, caregiving, travel, etc.); and Places (home and community). As even with retirement finances well intact, retirees who have a gap in one or more of these areas may still struggle with their personal retirement well-being.

Accordingly, from the advisor’s perspective, asking probing questions about how a prospective retiree will round out the key areas of their People, Pursuits, Places, and Health life portfolio in retirement creates a unique way to enrich the client relationship, delving into the areas beyond the finances alone (even as finances do impact how retirees may try to fulfill their life portfolio as well).

And for those who aren’t certain what to talk about when it comes to the life portfolio, and the key questions to ask, Anna shares her own valuable perspective as a phased retiree herself on what the areas and issues really are, that retirees – and their advisors – should be more aware of!

END_OF_DOCUMENT_TOKEN_TO_BE_REPLACED 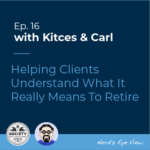 The traditional view of retirement has generally been to work as hard as you can during your working years and save as much as possible, to enjoy a life of comfortable leisure after the retirement transition. And although that may seem to be perfectly reasonable on the surface, the reality is that sometimes, careers are more of a (sometimes excruciating) slog rather than a purposeful journey, that even just making it to the retirement transition can be a challenge. In addition, the retirement transition itself can be challenging as well, as the expectation that we’re supposed to know exactly how we’re supposed to lead a fulfilled and rewarding life once it’s time to flip the retirement switch is not always the case in practice. Which, in turn, begs the question: is it really fair to ask someone to “hang in there” with a job that makes them miserable, so they can save up for a future they don’t know how they want to spend anyway?

In our sixteenth episode of “Kitces & Carl”, Michael Kitces and financial advisor communication guru Carl Richards explore different ways advisors can frame their conversations with clients when helping them envision and plan for a retirement they can actually look forward to, how to integrate relevant “what if” scenarios for a client that can help them truly understand the range of options available that they may not have otherwise thought possible and practical ways to ask questions in a way that probes what clients love to do, what excites them, and what brings them joy – which, in turn, can spark retirement ideas that they will be truly motivated to pursue.

As a starting point, advisors might ask clients how they might go about doing less of what they don’t like to do, and more of what they do like to do (rather than trying to envision a full-stop retirement). And what it might look like to adjust income over time to eventually reach a no-savings and no-withdrawal stage, to reflect a gradual change in work activity (e.g., jobs that might pay less, but that involve activities the client loves more), which can show the client they don’t necessarily have to wait until “retirement” to leave their current job in the first place. Meanwhile, advisors can also simply ask clients what kind of work they would do if they were financially independent and the level of income from their work didn’t matter to begin with, as a probing thought experiment to help clients see past the “traditional” picture of retirement and formulate specific goals that are both meaningful and enjoyable.

The key point, though, is simply that conversations around retirement planning must go past the traditional objective of figuring out how much a client needs to have at a certain age so that they can afford to maintain their current lifestyles, which presumes a sometimes-hard transition away from what might have been meaningful work into a retirement lifestyle they may not really have clarity about anyway. Instead, by examining alternative possibilities leading up to (and through) retirement, advisors can add even more value for their clients… not only by helping them understand their financial picture (in the traditional sense), but also in realizing the wide range of possibilities available to them moving forward!